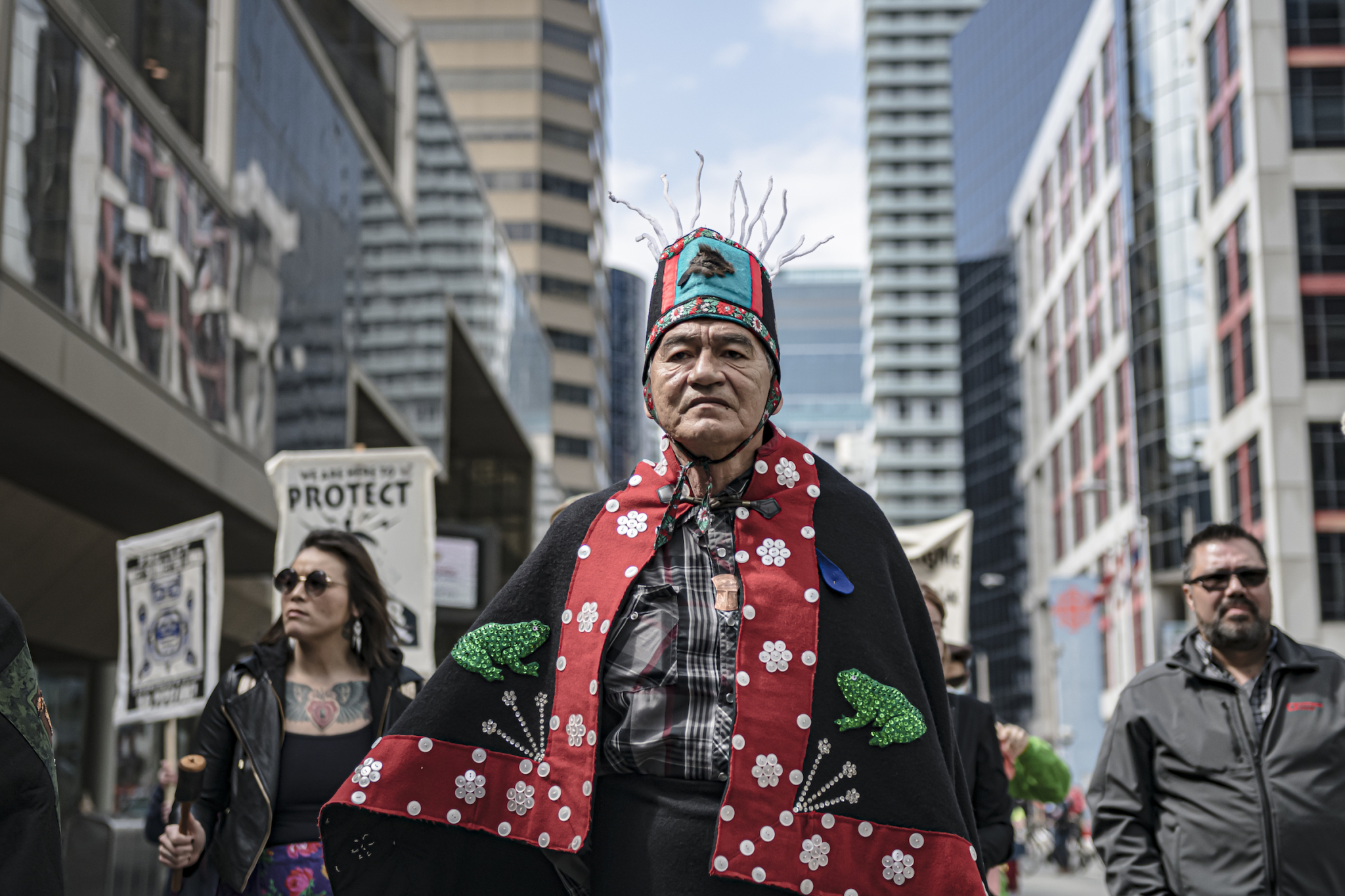 As Coastal GasLink prepares to drill under the Wedzin Kwa (Morice River), Wet’suwet’en hereditary leadership and their allies are saying the fight is reaching a flashpoint — and supporters across the country are on notice.

Over the coming months, a drill will slowly bore its way under the river — an important spawning ground for salmon, a source of clean drinking water and a sacred waterway to the Wet'suwet'en nation — to lay a pipe that would move fracked natural gas from the Dawson Creek area of B.C. to the LNG Canada export facility on the coast. The drilling is expected to last until the end of the year.

The ​​Gidimt’en Checkpoint has released a flurry of statements in recent days, noting the drilling is about to commence and alleging police violence. One statement put out over the weekend said Wet’suwet’en resistance to the pipeline’s construction has delayed it significantly, but intense police pressure to facilitate that construction continues.

“We will never stop defending our yintah the way our ancestors have done for thousands of years. The pipeline will never be put into service. We need solidarity actions to ensure this,” the statement reads.

Another statement published Wednesday said people in the community were under “a 24/7 campaign of surveillance and terror.” The statement adds that 74 people were arrested in three separate raids in January 2019, February 2020 and November 2021, and that since February of this year, RCMP and C-IRG (the RCMP’s Community-Industry Response Group) have entered village sites and homes hundreds of times.

The statement from Gidimt’en Checkpoint said: “We will not let the RCMP and C-IRG, B.C., Coastal GasLink, and Forsythe go unchallenged in their attempts to clear the lands for this pipeline project and their capitalist, colonial extraction. Every day, the government, industry, and police are invading our yintah.” Forsythe is Coastal GasLink’s hired private security.

Coastal GasLink is being built by TC Energy and its contractors. TC Energy told Canada’s National Observer it has safely completed “eight out of 10 major watercourse crossings” to date and that the “safety and security of our people, Indigenous and local communities, the public and the protection of the environment remain our primary focuses.”

Speaking over the phone with Canada’s National Observer, Wet’suwet’en Hereditary Chief Namoks described an “overwhelming” police presence in the nation’s unceded territory as TC Energy and its contractors prepared to drill under the river. He said last week that he and his fellow hereditary chiefs went to see what was happening at the drill site, and police tried to prevent them.

“You really can't impede us on our own territory … our law says we need to look after the land,” he said.

As Coastal GasLink prepares to drill under the Wedzin Kwa (Morice River), Wet’suwet’en hereditary leadership and their allies are saying the fight is reaching a flashpoint — and supporters across the country are on notice.

Chief Namoks said he was told vehicles weren’t allowed to the site for “safety” reasons as part of the justification for keeping him out.

“I've got two feet and a heartbeat; I know where I'm going,” he said back. “I took a fellow with a camera and a security guy was saying, ‘That's press, and press isn't allowed.’

“I said it's been proven in court, you can't stop press from informing the world what's going on and I need them for my safety and protection as I have no trust in the security firm or the RCMP.”

In an interview Wednesday, advocacy group Stand.earth’s climate finance campaigner Sarah Beuhler said that unlike other parts of the pipeline’s construction that could be reversed and remediated, once a pipeline is put under a river, it can’t be easily removed. Because the Wedzin Kwa is very significant to the Wet’suwet’en, she said, the ingredients are here for a major flashpoint.

“Drilling — especially under the Wedzin Kwa, which is still drinkable — is a flashpoint not just for local Indigenous community members, the hereditary leadership and their allies, but more broadly, this kind of flashpoint may drive the kind of attention we've seen in other Indigenous front-line fights,” she said.

“There's a real possibility of clashing between security forces, Indigenous leadership, protesters, protectors and allies, not just on the yintah but across so-called Canada and North America as well.”

Following the raid into Wet’suwet’en territory in February 2020, solidarity actions were launched across Canada, the most high-profile of which were railway blockades led by allied nations and supporters that shut down CN Rail’s eastern Canada network from Toronto to Halifax.

In 1997, the Supreme Court of Canada recognized Wet’suwet’en hereditary leadership as holding title to the nation’s unceded land in the landmark Delgamuukw v. British Columbia ruling.

As Coastal GasLink prepares to drill under the river, Beuhler said the Wet’suwet’en allies are on notice but that she doesn’t have specific knowledge of what the next steps might be.

“People are becoming aware this is a critical time in a decade-long resistance fight, and so the next things that come through, I would just assume that all tactics are on the table.”

since all covid restrictions

since all covid restrictions are gone, there is impediment to large gatherings in “ inconvenient to fossil fuel production, movement and use “ places ? Perhaps we all come out to show them a real time poll on what we think of their fossil crimes? what is happening at the source end of the fracking in Mordor…. oh I mean. albaturda?

Keep fighting the oppressors and bullies paid by the arrogant ignorant politician with taxpayers money to intimidate and harass the original inhabitants of this land. You can't shame the shameless and this "Community-Industry Response Group", a special unit of the RCMP tasked with policing opposition to resource extraction projects including the Coastal GasLink pipeline should be paid by the sus scrofas who's profits they are protecting. Such a disgrace to the nation abusing the population with treats and intimidation we require a citizen police force to protect the public against these Sturmtruppen, : a member of a group of specially trained and violent soldiers especially in Nazi Germany during World War II.

Sorry, I've put in many

Sorry, I've put in many comments at the CNO and The Tyee about my growing skepticism of these activists; about the matrilineal coalition being stripped of their positions by the males; whether the whole or even the majority of the Wet'suwet'en really support these four chiefs.

This is not like the Delgamuukw decision, where the Court noted that he had both the Hereditary Chiefs and the democratically-elected councils behind him, clear support from the entire Nation.

Here, there isn't even unanimity among 8 or 9 (?) Hereditary Chiefs, and almost no agreement from the other bodies - who kept getting re-elected after indicating their support for the pipeline project, which indicates general popular support for their position.

It's odd to find myself on the other side of this issue from where I started, but there I am. The Hereditary Chiefs can get full support for their position by just finding some way to show they have their Nation behind them. Delgamuukw was not a decision that handed Heredity Chiefs the divine right of Kings.