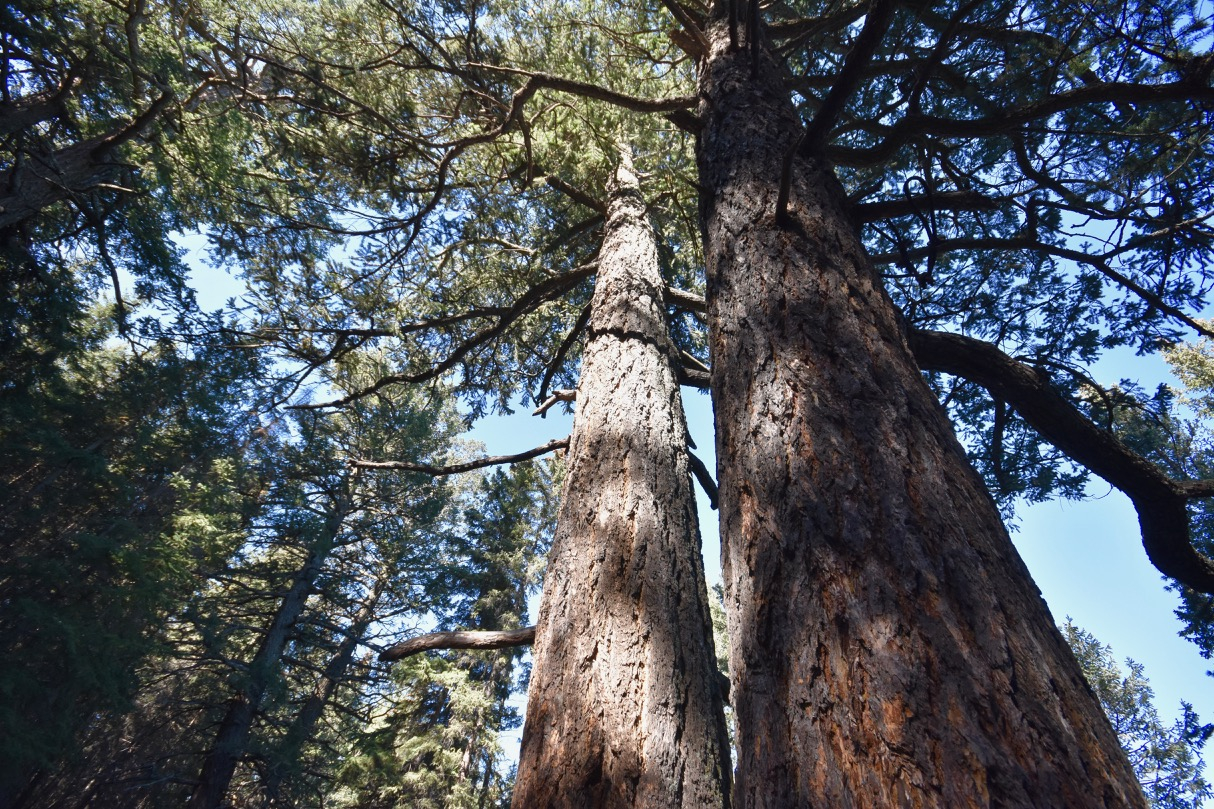 The Douglas Fir Trail in northwest Calgary is one of the most easterly stands of Douglas firs in Canada featuring ancient giants nearly 500 years old with trunks one to two metres in diameter.

They’ve survived remarkably well on north-facing slopes of the Bow River valley because there is good protection from drying winds and historically there has been sufficient rain and snow to satisfy these water-hungry elders. In a city where the growth of an oak tree seems imperceptible from year to year, these giants should be considered an irreplaceable treasure.

On a warm September morning, I stopped along the Douglas Fir Trail and took a moment to sit meditatively next to a fine specimen that rose at least 30 metres. The forest was alive with birdsong and the chatter of a distant chipmunk.

Studying the massive trunk, I noticed a small hole in the bark leaking a long line of gooey sap. My first reaction was to think that someone had vandalized the tree with a power drill. Then I remembered something I’d learned about sap being the tree’s defence mechanism against pests. I followed the sap down to find a fingernail-length beetle entombed in the sticky repellent. It was amazing to see the fir’s natural immune response in action.

A bark beetle infestation of Douglas firs can cause extensive damage to a forest, although the more famous mountain pine beetle is even more devastating. Climate change has been identified as a significant contributor to bark beetle outbreaks as warmer temperatures prevent the winter cold from killing the pest and provide a longer flight season in the summer.

After feasting on the oldest and largest trees, the beetles will lay eggs that hatch the following year and spread further into nearby healthy forests. The forest’s immune system will fight back, but an exploding beetle population can overwhelm its defences.

Every year, aerial surveys are done in B.C. to track bark beetle infestations as well as damage caused by disease, animals and abiotic factors like wind, wildfire and drought. In 2021, the summary of forest health conditions in B.C. reported over three million hectares of forest affected by bark beetles, which includes the infamous mountain pine beetle, and over six million hectares impacted by all sources of damage.

In 2007, the mountain pine beetle infestation was finding its sweet spot with nearly 10 million hectares of BC forest impacted and 575,000 hectares with moderate to severe mortality rates.

The National Resources Canada reported that by 2017, “58 per cent of sellable pine volume” had been lost in B.C. due to the outbreak. These are mortality figures rivalling the plague, where in 1349, the Black Death killed about half of all Londoners and from 1347 to 1351, it killed between 30 per cent and 60 per cent of all Europeans.

In the midst of B.C.’s devastating mountain pine beetle attack, Arthur Freeden and a team of researchers from the University of Northern British Columbia were studying the impact on carbon emissions for 11 years after the voracious pest devoured a pine-dominated stand of forest.

The results were surprising as the accepted belief among forest management professionals was that the dead forests would emit massive amounts of carbon as they slowly decayed over the next decade. This mindset justified the clear-cutting of beetle-damaged forests in order to replant saplings and start forest regeneration as quickly as possible.

The study revealed that the forest, which experienced approximately 83 per cent mortality due to pine beetles, reached a point where it exhibited “positive annual carbon storage” within three years when left to recover naturally.

Freeden indicated that they also monitored a forest attacked by pine beetles, then clear-cut and planted with new saplings. This location took about 10 years to reach positive annual carbon storage, meaning the area was storing more carbon over the year than it was emitting.

In the naturally recovering forest, small trees were left untouched by the beetles. There were also large- and medium-sized trees that survived the attack and these began to grow at an astounding rate once the dead timber fell and allowed the surviving trees to thrive on more sunshine. For example, the very old class of trees (99 years-plus) that survived the attack had an average growth of 496 per cent over a 10-year period.

Although young trees also had very high growth rates, it was less significant because they were small to begin with. Freeden compared it to a beginner’s investment portfolio earning a 20 per cent return versus a six-figure portfolio earning the same 20 per cent return. The more mature the tree, the more significant the overall growth and the greater the amount of carbon stored each year. From this point of view, it makes little sense to harvest a stand of forest and replace it with tiny saplings, even if the pine beetle mortality rate is very high.

However, in spite of the research data, B.C. Forestry is still allowing pine beetle-affected forests to be clear-cut under the guise of “responsible forest management.”

This article was updated to stipulate that Natural Resources Canada reported by 2017, “58 per cent of sellable pine volume” had been lost in B.C. due to the outbreak.

Headlines have slowed, but has old-growth logging in B.C.?

Think of old-growth as better than air conditioning

Another way to help a forest

Another way to help a forest bounce back would be not to create single-species plantations in the first place, so when infestations happened they'd be more diffuse, affecting fewer trees in any given forest, and spreading less aggressively without that critical mass of vulnerable trees.
Yes, I know, crazy talk, don't I know that makes clear-cutting far more complicated?