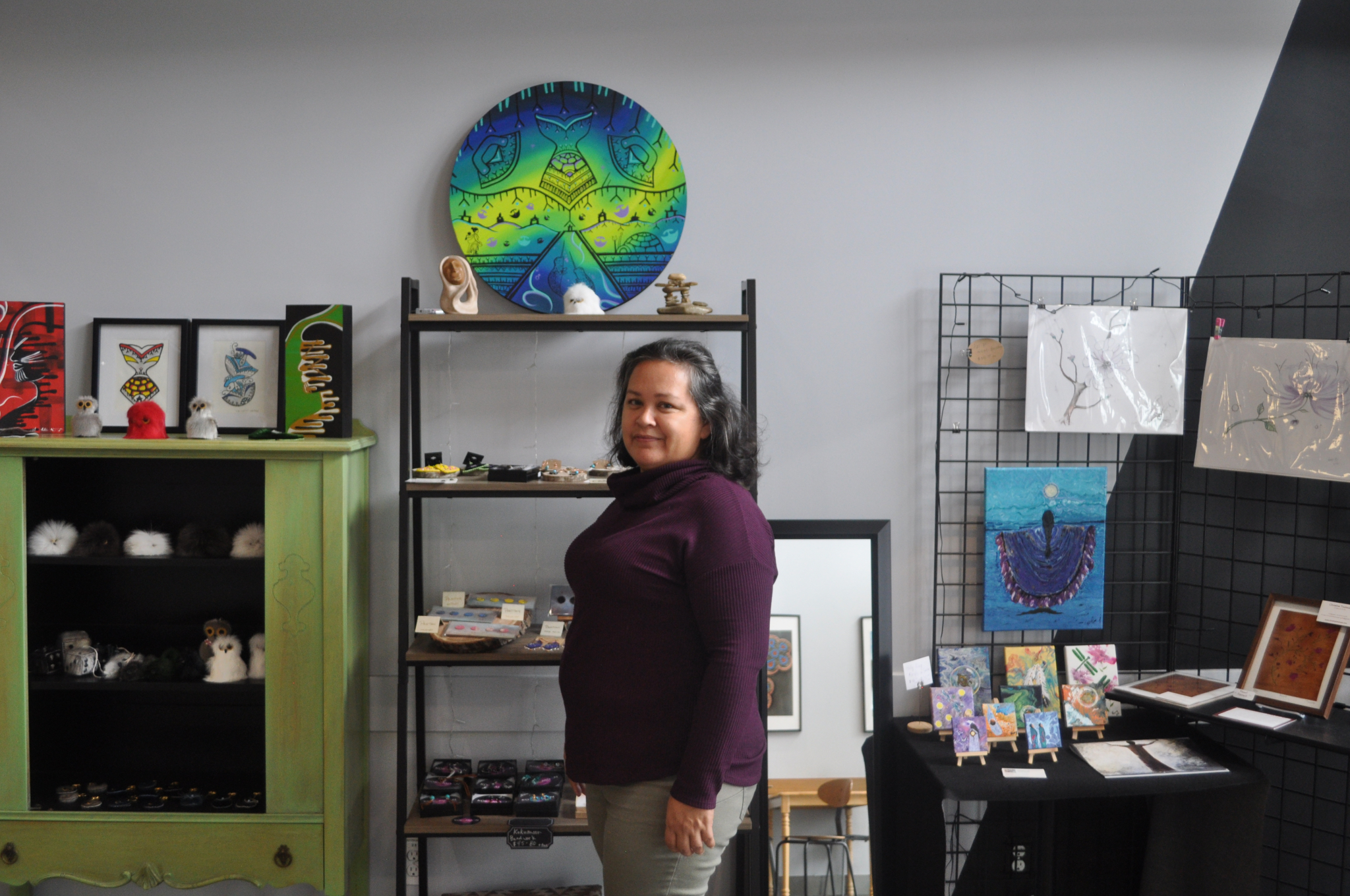 Paula Naponse’s dream of having a storefront was achieved after more than a decade of work, an Indigenous tourism training program and a push from her daughter. Photo by Matteo Cimellaro/Canada's National Observer
Previous story
Next story

Paula Naponse never thought she would own her own store, a lifelong dream she had since she was eight years old.

For a decade, Naponse’s business selling fashion, beadwork and artisanal goods like candles was an ad hoc affair. She had a name, Ondarez — a name inspired by a similar phrase she would see often on Facebook (it was 2008, peak Facebook) posts from her home community: “I’m on the rez.”

But a storefront seemed out of reach. Naponse sold her wares at cultural gatherings and by mail order. But thanks to a tourism training program and a push from her eldest daughter, Naponse’s business expanded to her childhood dream of a storefront and café.

“I have a sign now! I never ever thought that it could happen to me,” Naponse told Canada’s National Observer.

The Beandigen Café, a coffee-pun play on the Anishnaabemowin word biindigen, or welcome, opened in November 2021 and serves as a storefront for Indigenous artisans and a community space for beading circles, Indigenous open mic nights, and NDN taco pop-ups.

The space is years of cumulative hard work by Naponse, including parenting and seizing opportunities as they arise.

Naponse's story begins in her home community of Atikameksheng Anishnawbek, a First Nation in northern Ontario near Sudbury where she was born and raised. Naponse, inspired by the beauty and goodness of back home, created products that reflected her community.

“I always want people to know about who I am and where I come from and our people,” she says. “And the beautiful things… Of who we are, not necessarily the struggles, the trauma, the pain, we have that, but I’m always about how we are moving forward and what we have as our strength.”

Naponse, who is a self-taught artist, works with several techniques, including sewing, regalia, beadwork, basket-weaving, candle-making and silk-screening.

“Everything is self-taught, from doing the products to learning how to run a business,” she says. “For me, I always want to find out, that’s the learner part of me, knowing that I found it myself and feeling proud of it in the end."

Since 2008, her work with Ondarez has oscillated between part-time and full-time depending on what was happening in her life. In the decade since, she moved to Ottawa, attended university and continued to parent four children.

The Beandigen Café, a coffee-pun play on the Anishnaabemowin word biindigen, or welcome, opened in November 2021 and serves as a storefront for Indigenous artisans and a community space for beading circles, open mic nights, and taco pop-ups.

Three years later in 2018, tragedy struck. Her husband passed away in a car accident, leaving Naponse a single parent.

She wasn’t sure she was going to continue with her business, but in 2020, an opportunity arose with the eight-week Indigenous Tourism Entrepreneurship Training program, or ITET for short.

The program is led by Algonquin College and Ottawa Tourism in partnership with the Indigenous Tourism Association of Canada and Ontario tourism to give business training and networking opportunities through an Indigenized lens.

Algonquin College is currently looking to carry on the program, which launched in 2020, through its Indigenous initiatives as part of its truth and reconciliation division. Algonquin College and Ottawa Tourism are exploring how to integrate the ITET program into their larger tourism programs.

It was good timing: before the pandemic devastated the tourism industry, there were an estimated 40,000 Indigenous tourism employees and 1,900 Indigenous-led businesses. Today, there are about 15,000 employees and 1,000 businesses left, according to research from the Conference Board of Canada.

To culminate the ITET program, there was a competition, similar to TV’s Dragons’ Den, where the participants would pitch their business. Naponse won the competition among her class colleagues and was awarded a video of her business, among other promotions.

After the program, Ottawa Tourism stayed in touch with Naponse. A new opportunity, an application to open a storefront, emerged around Lansdowne Park, a commercial and entertainment district that houses Ottawa’s OHL team the Ottawa 67’s and its CFL team the Redblacks, alongside big box stores and restaurants.

Naponse wasn’t sure to move forward with the storefront proposal, but her eldest daughter convinced her to apply together as Beandigen. Her daughter had worked in the café scene in Ottawa and was an artist herself, so why not combine the two? Beans and beads.

“It was my daughter, my daughter really helped me, and now she’s the co-owner.”

Naponse and her daughters work at the café now. The two young adults do most of the heavy lifting since Naponse also holds a full-time job as a strategic adviser with her First Nation band office. But the café is a project of love — the family does it to honour their late husband and father.

“Part of this is with him, too. He loved coffee, this type of environment… His spirit is with me when I do this,” Naponse says.

On a mural that spans across the ceiling of the café, two small letters mark the bow of a canoe — GC — her late husband’s initials.

“I’m building it for my kids, so they can do whatever they want to do,” she says. “I never thought this was available to me.”

Correction: A previous version of this article referred to the Indigenous Tourism Entrepreneurship Training program as ITEC, rather than the correct acronym of ITET. Canada's National Observer regrets this error.

The fate of your food rests with Canada’s native bees