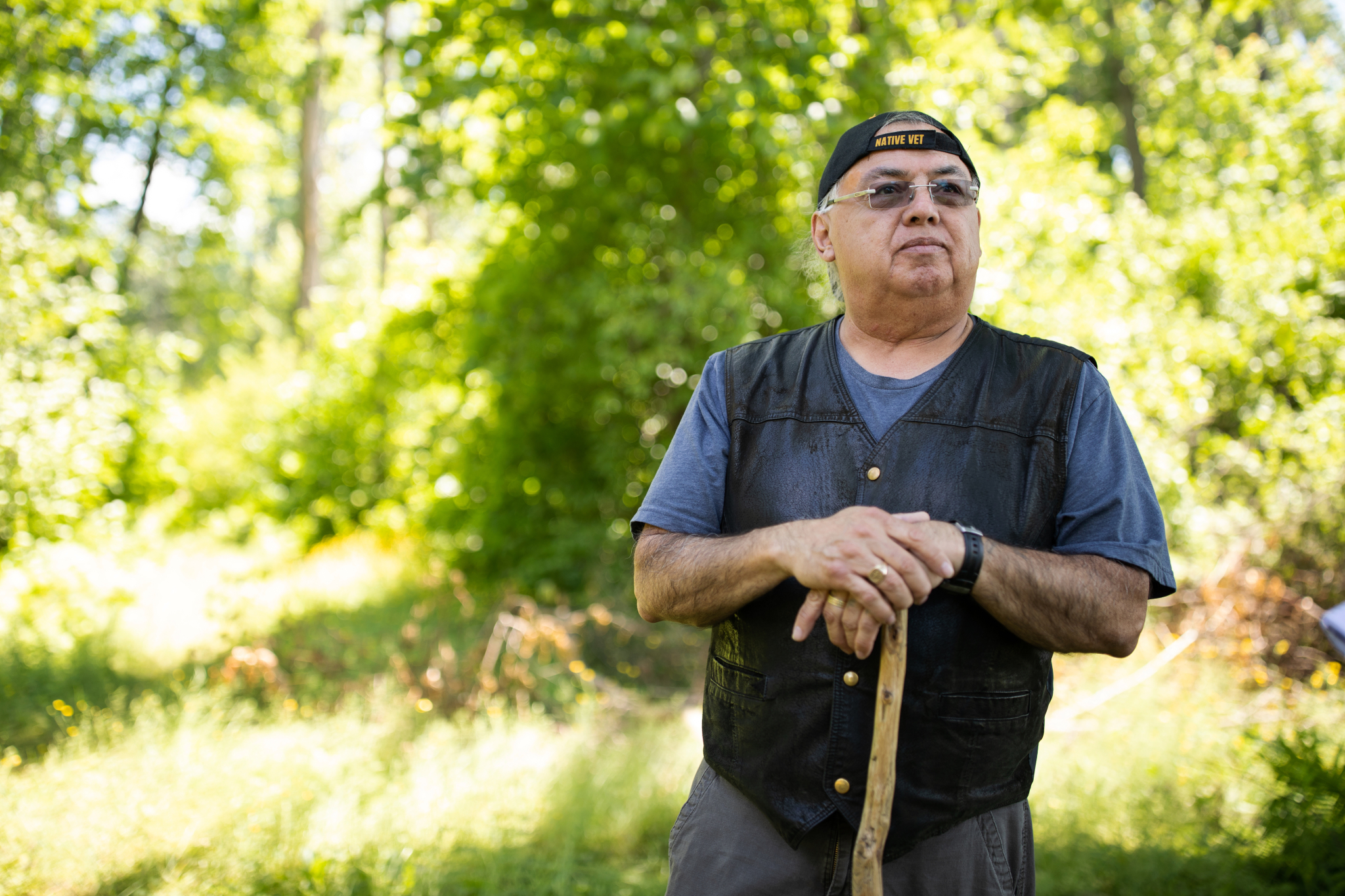 Jeff Monague sees life everywhere he looks as he gives a tour of a historic site that will likely become a highway. "This can’t be replaced. That’s the kind of thing we’ve forgotten, our connection to it all," he says. Photo by Nick Iwanyshyn
Previous story

The Holland Marsh is a place where wind whips across low-lying flat farm fields and whistles through old barns and bulrushes along the banks of the east branch of Ontario's Holland River. Where dark, shiny water lies motionless on the forest floor and farmers plant corn in long, parallel rows; where quaint roads connect semi-rural properties to nearby towns: Bradford and East Gwillimbury, and a little further south, Newmarket.

Where — unless 11th-hour efforts to stop it succeed — a 16-kilometre four-lane highway will cut a swath through this protected Greenbelt land, paving almost 11 hectares of wetlands and crossing 27 waterways to connect Highway 404 on the east to Highway 400 to the west.

Much of the debate over the highway, dubbed the Bradford Bypass, centres on whether it would actually reduce traffic congestion or simply draw more cars, and what environmental damage it could bring here and farther north, where road pollution would flow into the already imperilled Lake Simcoe.

But there is more at stake here, factors much less discussed: the historical and present significance of the area to Indigenous Nations that have used the land and waters since time immemorial. And the possible caches of archeological artifacts from Indigenous Nations and later, fur traders and settlers. And, simply, the fact that the land and the water here, as in everywhere else, are part of something greater.

Lying about 60 kilometres north of Toronto, the marsh exists in a kind of interzone between howling superhighways packed with traffic and pastoral fields. What remains of the wetlands, mostly drained a century ago to make way for crops, hint at earlier days before the tentacles of big-city sprawl extended so far north.

Down a rough trail through wetland forests that sparkle in the afternoon sun and writhe with mosquitoes, Jeff Monague walks softly over the ground beside the river, looking at the trees, the soil, the leaves. He points to a snag that to other eyes, might appear dead. See that nest up there, he says. And see those holes? It’s an “apartment building” for birds.

“Everywhere here there’s life happening,” says Monague, an Anishinaabe Elder and former chief of the Beausoleil First Nation. “And this is what’s in danger.”

The land is part of Monague’s traditional territory that his ancestors occupied long before any Europeans trod upon it. It was a neutral area, where people from different communities gathered to trade, spending part of the year camping on the sides of the broad, meandering river that served as a main transportation route. He has heard stories of being on this land that date back as far as the last ice age.

Unless 11th-hour efforts to stop it succeed, a 16-kilometre four-lane highway will cut a swath through this protected Greenbelt land, paving almost 11 hectares of wetlands and crossing 27 waterways to connect two Ontario highways. #HollandMarsh

“This whole area is important,” says Monague. “It’s evident that there has been [human] occupation all the way along here.”

Out on the water, Bert Duclos navigates his kayak in the afternoon sun, using his paddle to point out significant sites on the bank. A former heritage consultant for the province, Duclos is a local resident and self-proclaimed history nerd who’s written extensively about the area that, if the highway goes ahead as planned, will lie under tons of concrete.

Europeans are believed to have first come to the area in the mid-1600s, dubbing it the Lower Landing. The route along the river was used for the next 150 years, with the flat banks providing a stopping point and trading centre for fur traders, missionaries and other Europeans.

In the 1790s, settlers built a cart road from the area south to the settlement — now Toronto — on the shores of Lake Ontario. (That road is now Yonge Street.) The Lower Landing grew as a settlement and trade centre, and then, through the War of 1812, as a pivotal military depot. Later, it became a port for steamers travelling the river.

In a history of the area published in Bradford Today, Duclos wrote, “The site of the Lower Landing is under imminent threat of total loss by the province’s proposed plans for the Bradford Bypass. The route of this highway joining Highway 400 and Highway 404 will put the Lower Landing under the bulldozer and tons of concrete. It’s tough to read a heritage plaque at 120 kilometres an hour.”

Archeological surveys are underway to determine the heritage value, if any, of the site. But value goes deeper than that, says Duclos as he floats down the river imagining the buildings and the activity that once was here.

There may be artifacts to be unearthed by archeologists, he muses. “We tend to focus on physical, but spiritual and cultural [are] just as important.”

Monague says that while much has changed, the area retains the richness that made it a central hub for millennia. There are medicines: wild mint for ticks, jewel weed for poison ivy. There is food and shelter, in the form of fallen trees and bark. There are all the living things that exist here in delicate balance.

“Everything is in a circle here,” he says. “This can’t be replaced. That’s the kind of thing we’ve forgotten, our connection to it all. We have forgotten that we’re part of it, and when we change it, we change ourselves. We separate ourselves from all of it.

“We have to do something different. And having more cars doesn’t help.”

I don't think the current

I don't think the current Ontario government should be allowed to make one more decision or take one more step until they've all completed a course in ecology, systems thinking, climate change and Indigenous traditional knowledge and ways of knowing. What a complete bunch of ecologically illiterate, life-disavowing, mean-spirited a$$hats. Why can the judiciary not serve an injunction against projects like this — projects that ensure "irrevocable harm"? Grrrrr.

At the beginning of the 20th

At the beginning of the 20th century all of Europe were summoned to go to war. To end all wars? No to begin endless war starting with the mental health of our species. This century brought us to Hitler, Stalin, Trump, Thatcher, and all the other rulers who promise wealth for all but take away our integrity while leaving the majority homeless and hungry. Where are the leaders waiting to take on a traumatized species on a battered and tortured planet?

As long as we entrust protection of the henhouse of the environment to the fox of government, we will be forever fighting battles, winning some and losing some. Our best hope is to take decisions about the environment away from governments of the day, with all the inevitable interests they must please or appease. Instead of fighting these battles one at a time, we need to fight one big battle to protect it all, once and for all. The power to protect needs to be vested in arms-length tribunals or courts, legitimized by either a constitutional amendment, or perhaps a referendum, or some other legal framework that can only be changed by a whole-of-society decision.

Governments now can simply vote away the hardest won environmental protections of the past, as Ontario’s Conservative Ford government has just done in knee-capping conservation authorities, and tearing through the Greenbelt with new expressways.

There will always be another temptation, and another battle. Since we can never add to the environment, by bringing species back, or recreating old-growth forests, the losses make it a one-way arrow. Whether quickly or slowly, the end will be the same, only the when will change, and the thought of that is morale crushing.

Is anyone thinking in terms of mechanisms to bind governments from destroying habitat by ensconcing its protection within a larger legal framework they cannot expediently change?

The last two paragraphs of Mr

The last two paragraphs of Mr. Heinrichs commentary are the first time I've heard of a constitutional prohibition against unilateral/partisan or commercial life altering destruction of the environment. I especially appreciate the human rights analogy to environmental rights. In truth both are required to repair and preserve life on earth

So if we, a relatively

So if we, a relatively wealthy and educated nation, can't protect our wilderness and especially our farmland in the face of economic interests, what is the future of the world's ice caps, or the rainforests in Brazil and the Congo? I think I can see the future of mankind.. and it doesn't look good at all.