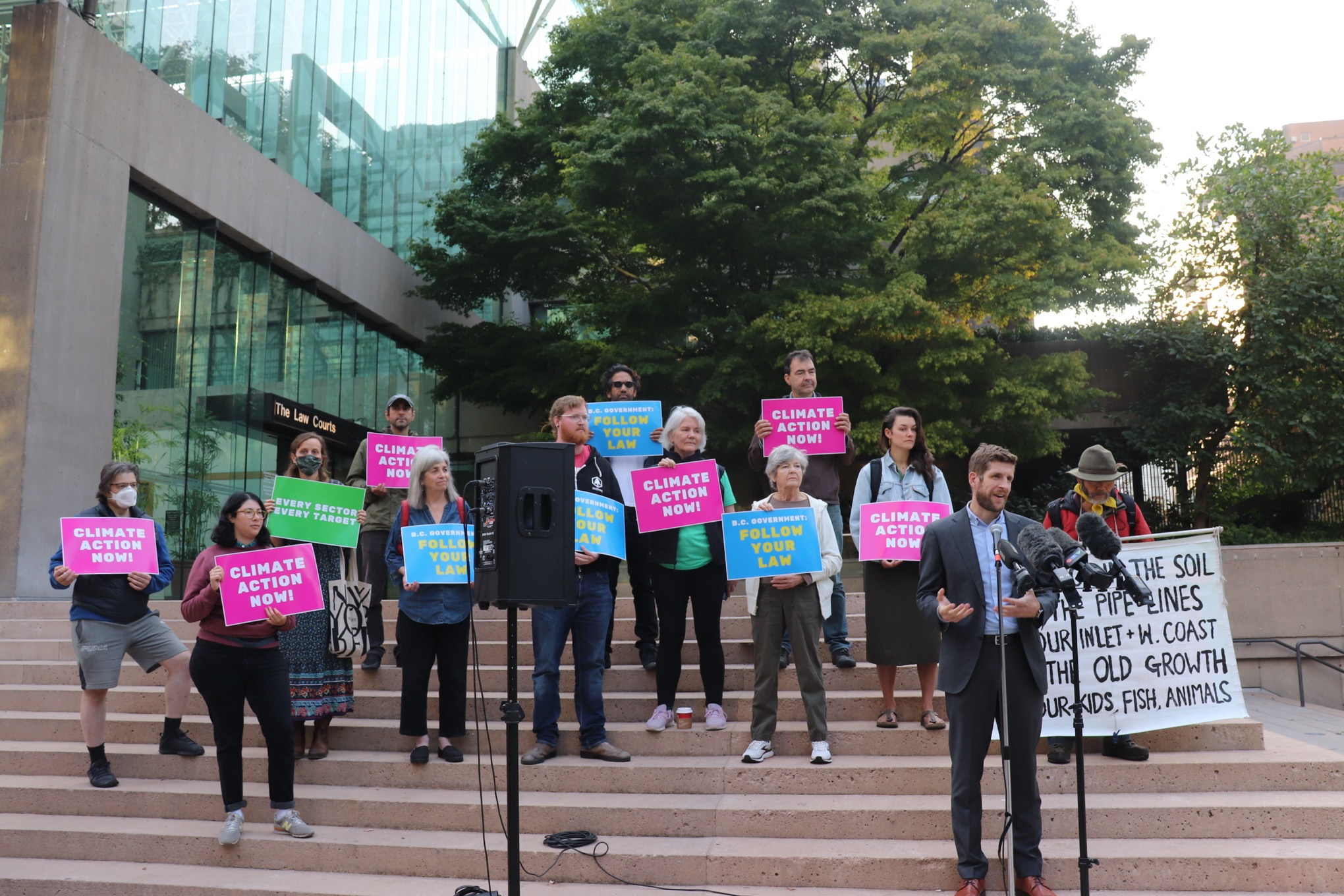 On Oct. 4, people rallied at the Vancouver courthouse to launch a hearing where Sierra Club BC and the province face off over B.C.'s emission reduction plans. Photo by Gabrielle Vacheresse / Sierra Club BC
Previous story

The B.C. government is in court this week defending itself against allegations that it has failed to present an adequate plan to meet the province’s greenhouse gas emission reduction targets.

The lawsuit was filed in B.C. Supreme Court by Ecojustice on behalf of Sierra Club BC in March. Lawyers from environmental law charity Ecojustice will represent the group in court hearings today and tomorrow in Vancouver.

By law, the province has to publish annual accountability reports on its progress towards emission reduction targets. Sierra Club BC argues this means the annual reports should reflect gaps in the plan. These gaps include the lack of a plan on how to reach 2025, 2040 and 2050 climate targets and the absence of a plan to cut carbon pollution from the oil and gas sector, which could grow rapidly in the coming years.

But while the province is taking steps to ensure we have more electric cars and improved building standards to reduce emissions, at the same time, it continues to subsidize the oil and gas sector, particularly liquefied natural gas (LNG), said Jens Wieting of Sierra Club BC.

“There's a reason why the B.C. government has still not demonstrated how we can meet the oil and gas sector targets for 2030,” Wieting told Canada’s National Observer earlier this week. That reason, he says, is that it's not possible to build new LNG terminals and reduce emissions at the same time.

LNG Canada is in the midst of building an LNG terminal in Kitimat, B.C., which will connect to the Coastal GasLink pipeline. In Delta, FortisBC plans to expand the existing Tilbury LNG production and export facilities on the Fraser River. In 2023, major construction will begin on Woodfibre LNG, a small-scale LNG proposal owned by Pacific Oil and Gas in Squamish.

The province’s climate plan does not reference LNG production or export.

In its official response to the lawsuit, the province said in May the issues raised in the suit are merely a difference of opinion and it should be thrown out. It called Sierra’s lawsuit “misguided,” and argued that the law doesn’t specify a standard of adequacy for plans to achieve targets, the Vancouver Sun reported.

The B.C. provincial government is in court this week defending itself against allegations that it has failed to present an adequate plan to meet the province’s greenhouse gas emission reduction targets.

“By delaying action, by delaying sharing information on how exactly we will reduce emissions, the B.C. government keeps opening up this corridor where we can still have new projects going forward,” said Wieting.

“This shows why it is so important to address the gaps today, not tomorrow. Because once built, LNG terminals will lock in high emissions for decades into the future.”

This would make it nearly impossible for other sectors to meet their emission reduction targets in coming decades, he added.

Escalating climate impacts at home and abroad — like the catastrophic floods in Pakistan and hurricane Fiona that recently rocked the East Coast — illustrate the need to rapidly reduce GHG emissions.

“It's very clear that ... without clarity, without specifics in B.C.’s climate action plans that show how we can meet our targets, and building new fossil fuel projects at the same time, we will not be able to avoid even worse catastrophic climate impacts in the future,” said Wieting.

Good for them. We have had

Good for them. We have had enough of governments setting targets and then not planning to meet them.