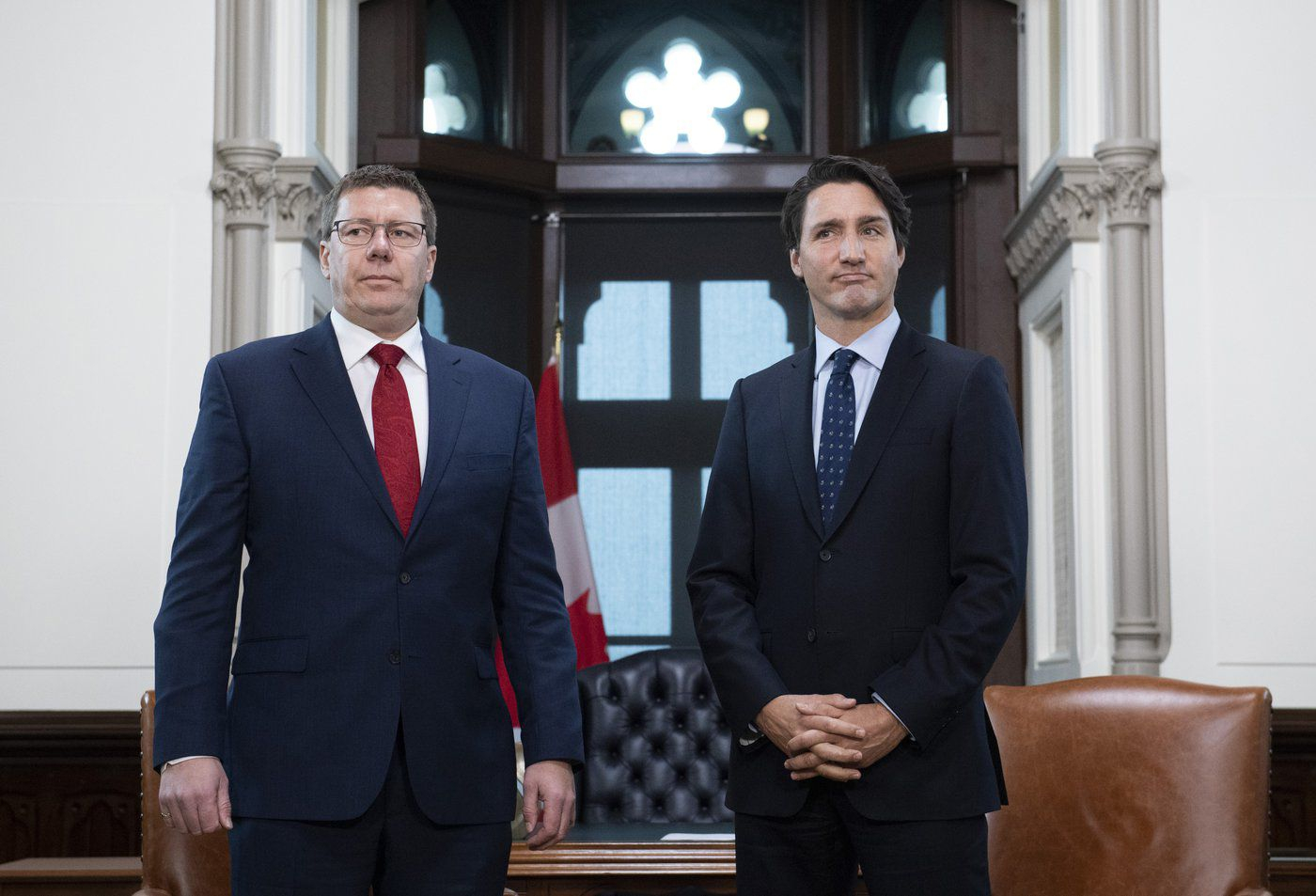 Prime Minister Justin Trudeau meets with Premier of Saskatchewan Scott Moe in his office on Parliament Hill in Ottawa on Tuesday, Nov. 12, 2019. File photo by The Canadian Press/Justin Tang
Previous story
Next story

Moe says Canadian environmental policies are causing economic harm to his province and creating hardship for farmers, natural resource workers and others.

A cost analysis from Saskatchewan's Ministry of Finance estimates the province could lose $111 billion by 2035 through federal environmental policies. Moe says the province is trying to maintain control over its natural resources, and that includes maintaining emissions from fertilizer and oil and gas production.

Nearly a year after tweeting "Saskatchewan needs to be a nation within a nation," the premier released on Tuesday a policy paper called “Drawing the Line: Defending Saskatchewan’s Economic Autonomy” at a chamber of commerce lunch in North Battleford.

The paper highlights the government’s plan to flex its own autonomy, starting with a bill to be introduced this fall to address federalism.

"We respect the Constitution we have in this nation. But (the bill) will most certainly reassert our provincial jurisdiction that we have and ultimately provide us that opportunity and certainty to move forward and expand some of the most sustainably producing industries on Earth," Moe said.

There will be an opportunity to collaborate with Alberta on the bill, Moe said, as Premier Danielle Smith has promised to table a sovereignty act this fall to assert Alberta's constitutional rights.

Saskatchewan is on the cusp of further investment and opportunity, Moe added, and he doesn’t want to see that disrupted by Ottawa.

The province continues to experience a resource boom in potash, uranium and oil brought on by the Russian invasion of Ukraine and global supply issues. In the first three months of the year, Saskatchewan made nearly $2 billion from potash and oil, enough for the province to balance its budget for the first time since 2014-15.

"All of the moves we are taking from here ... are about Saskatchewan. And they're about the opportunity we have in this province to grow and prosper, to attract investment and to ultimately reinvest back into our communities," Moe said.

Under the Constitution, natural resources mainly fall under provincial jurisdiction, said Dwight Newman, a law professor at the University of Saskatchewan.

"The complication is the federal government has some jurisdiction that can overlap with that. And on some certain types of environmental legislation, that may end up affecting resources," Newman said.

If conflicts between federal and provincial governments can’t be resolved through negotiation, it must be decided by the courts, he said.

That is being done with Canada's Impact Assessment Act, which allows the government to assess environmental impacts of projects on federal lands before they go ahead.

In May, Alberta’s top court gave its opinion that the law is unconstitutional, but the federal government plans to appeal. Saskatchewan had participated in the legal reference in support of its western neighbour, and Moe has said Saskatchewan would intervene should it move to the Supreme Court of Canada.

"Whether it indicates something beyond that, it’s difficult to know."

Saskatchewan previously challenged the federal government on the constitutionality of the price on carbon, but lost after the Supreme Court ruled Ottawa is acting within its jurisdiction.

This report by The Canadian Press was first published Oct. 11, 2022.