Devastating tornadoes hit Canada without warning — something has to change 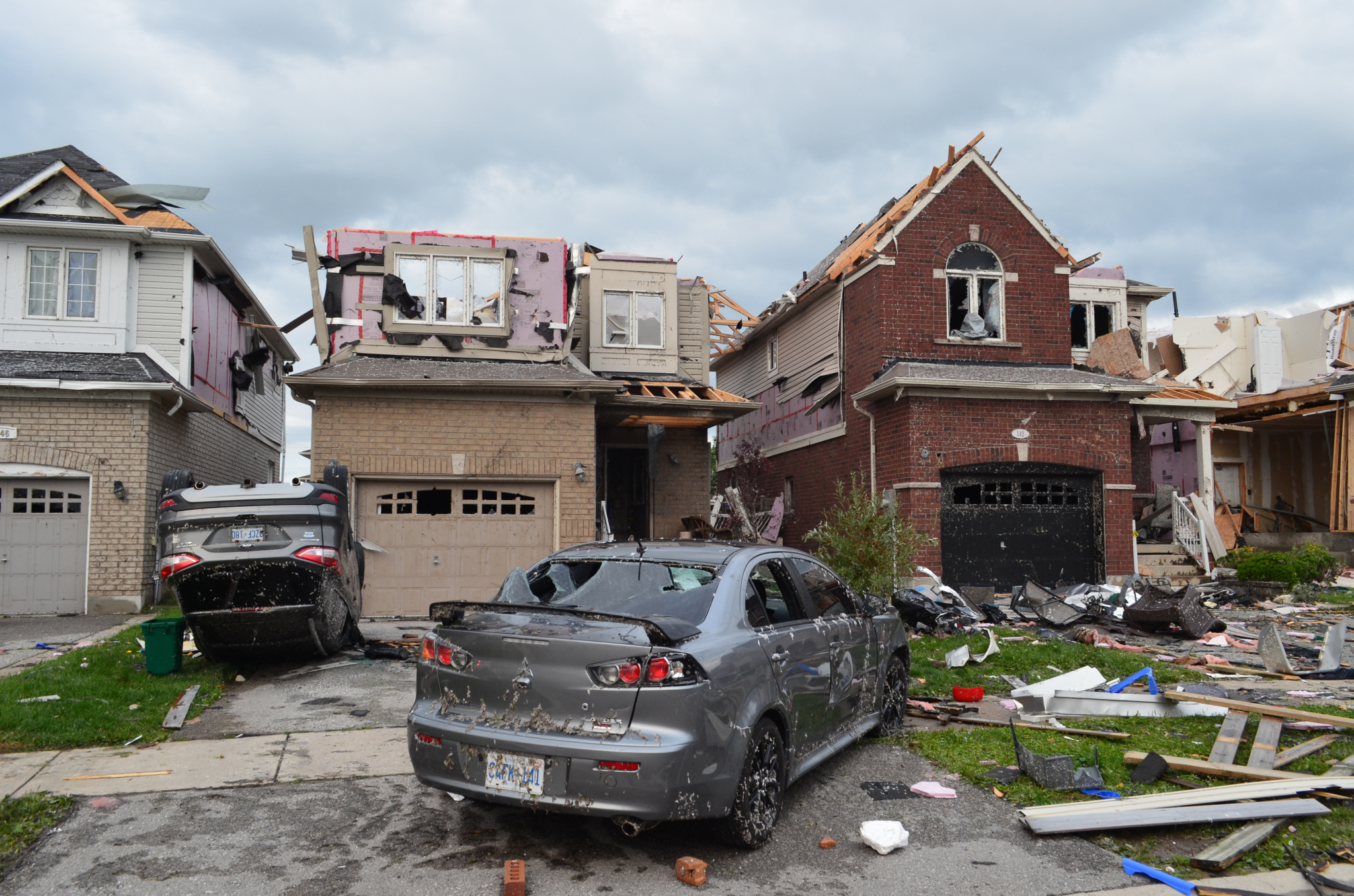 Damage in the aftermath of a tornado that struck Barrie, Ont., on July 15, 2021. Photo submitted by The Northern Tornadoes Project
Previous story

The sky was an ominous grey, and a white dusting of insulation blown from damaged roofs coated building walls and car windows when severe weather scientist Dave Sills arrived in Barrie, Ont., to view the tornado damage.

The tornado that spun up on July 15, 2021 flipped cars, smashed windows and ripped off rooftops. Sills witnessed people whose homes were destroyed or badly damaged wandering the streets with suitcases and garbage bags filled with scavenged necessities.

With maximum wind speeds estimated at 210 km/h, the tornado was classified as a two on the Enhanced Fujita (EF) Scale because it fell within the 180-km/h to 220-km/h range. It carved a 12.5-kilometre scar into Barrie, injured 11 people, and caused an estimated $107 million of damage.

“Every time you get to one of these [post-tornado] scenes, you’re bewildered by the chaos of it,” said Sills, executive director of the Northern Tornadoes Project (NTP), a Canadian research program that aims to better detect, understand and predict tornadoes while mitigating their harm.

“You’re in awe with what the wind has done, but you also feel so bad for the people who are affected.”

Unfortunately, many residents didn’t receive Environment Canada’s tornado warning alert until after it had hit, said Sills, noting delayed or completely missed warnings are not uncommon in Canada.

This past May at the beginning of Canada’s tornado season, NTP published an assessment of Environment and Climate Change Canada’s (ECCC) 2019 to 2021 tornado watch and warning performance.

It compiled a comprehensive database of tornadoes in Canada for those years and found that 70 per cent had no ECCC tornado warning.

Results were slightly better when looking at the more powerful tornadoes on the EF Scale, yet warnings were still not issued in 64 per cent of the 39 documented EF2 tornadoes.

NTP recommended ECCC increase the number of tornado warnings it issues and get them out faster. This will require greater training and ensuring that forecasters have “cutting-edge tornado detection, nowcasting, and forecasting tools,” the report stated.

The National Tornadoes Project crunched the numbers and found that 70 per cent of tornadoes that touched down in Canada between 2019 and 2021 had no warnings. #tornado #EnvironmentCanada

NTP said it believes the number of tornado watches and warnings increased this year compared to previous years; final numbers will be tallied later this fall. But ECCC says this potential increase isn’t necessarily because of NTP’s assessment.

“Environment Canada did look seriously at a couple events last summer — the tornado in Mascouche, [Quebec] and the tornado in Barrie. Both kind of fell through the cracks a little bit, for different reasons,” said Peter Kimbell, an ECCC warning preparedness meteorologist, in an interview with Canada’s National Observer.

Mascouche’s June 21, 2021 EF2 tornado arrived in the area with no tornado warning and killed one person who had taken shelter in a shed.

“We recognized that there needed to be a different approach to these severe weather events,” said Kimbell, and so ECCC adjusted its internal processes to focus more on severe thunderstorms, which can form tornadoes under the right conditions.

The change was made before NTP’s report card came out, he said, and ECCC plans to examine how the change influenced warning performance at the end of this season.

The discrepancy between the number of tornadoes and warnings is really a symptom of a bigger problem, which is Canada simply doesn’t know enough about tornadoes, said NTP’s lead researcher and Western University civil engineering professor Gregory Kopp.

As populations grow and cover more of the land, the impact of tornado strikes is expected to rise, putting lives, property and tax dollars on the line, he added.

NTP is seeking to learn more and mitigate losses through data collection, meteorology, engineering and even collaborating with social science experts for a more holistic view.

The research program was founded in 2017 as a partnership between Western University and ImpactWX to track tornadoes in northern Ontario. It expanded Canada-wide in 2019 and now also partners with the University of Manitoba, Pelmorex’s The Weather Network, Instant Weather and CatIQ, and collaborates with Environment Canada and other Canadian and international universities.

“I’m really, as an engineer, interested in the roofs and the strength of the roofs, because that’s the first weak link. Once you lose the roof, the house is structurally condemned,” said Kopp. In severe cases, sometimes the roof can’t be found because it’s been smashed to pieces.

There are low-cost, preventative solutions for major property damage, though, like using steel straps to strengthen wood-framed roofs and houses when building, and using longer, threaded nails — both of which should be incorporated into building codes, he said.

Anthropologist and assistant professor at York University Jennifer Spinney leads the social science, human-focused side of NTP’s efforts with the help of her disaster and emergency management students.

She and her students travel to affected communities, sometimes weeks or months later, to interview people about what happened.

Spinney recalls one woman recounting her survival story while sitting on the front step of what used to be her house and was now just a platform. She said she heard the rumbling, went out to see what it was, and when she realized what was happening, took cover in her bathtub, Spinney said.

“She braced herself with her hands and feet on the sides of the bathtub, and then the next thing she knew, she woke up in a pile of rubbish, far from her house,” said Spinney.

It’s important to consider the “human dimension” of severe weather, and documenting people’s experiences adds to the whole picture and ensures NTP’s work has maximum impact, she said.