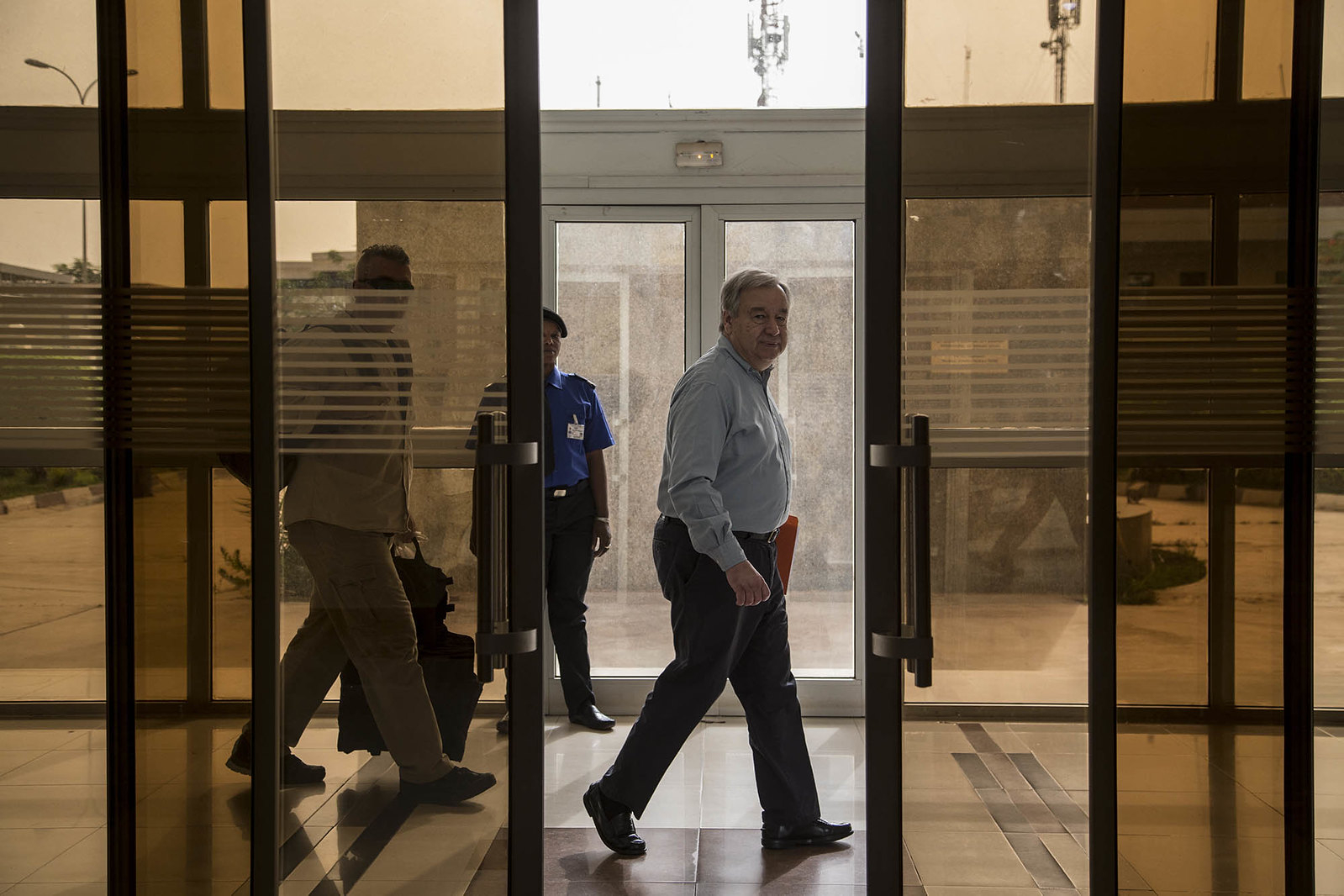 “Half of humanity is in the danger zone from floods, droughts, extreme storms and wildfires. No nation is immune. Yet we continue to feed our fossil fuel addiction.”

He forced them to face the facts: “We have a choice — collective action or collective suicide. It is in our hands.”

It was an unprecedented warning, delivered in colourful, forceful and apocalyptic terms. And it was one that António Guterres has been repeating for months.

In the past year, Guterres has notably stepped up his rhetoric on the climate emergency, calling optimism “an illusion,” warning that we are “digging our own graves” and accusing humanity of “treating nature like a toilet”.

Guterres’s views are backed by the most authoritative science. The Intergovernmental Panel on Climate Change, made up of the world’s leading climate scientists, warned this year there was only the slimmest chance of avoiding changes to the climate that would be catastrophic and “irreversible.”

The Intergovernmental Science-Policy Platform on Biodiversity and Ecosystem Services in 2019 told of similar calamity to the natural world: one million species at risk of extinction, natural ecosystems that have lost half their area, the biomass of wild animals plunging by 82 per cent and the life-support systems of the Earth at risk of collapse.

These are catastrophes, by any definition. But Guterres’s language, coming from the world’s most senior statesman, is still highly unusual. So is the provocation. No one has been spared his lashing, as he dares to use terms usually deemed too undiplomatic for public utterance.

He has accused the political and corporate world of blatant untruths. “Some governments and business leaders are saying one thing but doing another. Simply put, they are lying,” he said in April.

Oil and gas companies, with their huge profits, have been on the receiving end, too. “Fossil fuel producers and financiers have humanity by the throat. For decades, the fossil fuel industry has invested heavily in pseudoscience and public relations — with a false narrative to minimize their responsibility for climate change and undermine ambitious climate policies,” he told world leaders in June.

“He has been very helpful,” said one developed country official, who could not be named (because most such officials, unlike Guterres, are not allowed to speak freely). “You don’t often get officials of his level speaking as clearly and as frankly as he does.”

Born in Lisbon, Portugal, in 1949, Guterres is an engineer by training, and as such has an unusually deep understanding both of the causes of the climate crisis, the chemistry and physics that underpin the science, and of the solutions — renewable energy, electric vehicles, the overhaul of global infrastructure with clean technology.

He also has personal experience of political upheaval. Speaking to The Guardian by video call from his home in New York, dressed in a slightly tattered green cardigan and checked shirt, he said: “I was an extremely lucky person. I had all the possible positive things in my life. My family provided me with an excellent education. I had a revolution in my country when I became an adult, allowing me to have fantastic experiences.”

From there, he took on the role of UN high commissioner for refugees in 2005. “I had the best 10 years of my life, in which it was possible to be in the most dramatic situations in the world, but to have the power to take decisions and make life better for those people,” he told The Guardian. “So [with] all these experiences I’ve accumulated, my duty now is to do my best in these difficult circumstances, to help countries and help people overcome the enormous challenges we face, of climate, of war, of inequality.”

Guterres took office as UN secretary general in January 2017. Previous incumbents have faced their share of global crises. The UN had existed for only 17 years at the time of the Cuban missile crisis and nuclear Armageddon froze into a chronic threat throughout the Cold War. Famines, wars, Aids and the fall of the Eastern Bloc followed. In the past three years, add plague to that roster: the COVID-19 pandemic.

The current occupant believes the threat of the climate crisis surpasses all these. He warns: “At the present level [of emissions], we will be doomed. We are approaching tipping points, and tipping points that will make [climate change] irreversible. The damage that would not allow us to recover.”

Carlos Fuller, Belize’s representative at COP27, said: “I applaud him for being very forceful and persistent on the need for all countries, but especially the G20, to take action on climate change and transforming their economies dependent on fossil fuels. As head of the entire UN system, and the lead international civil servant, that is his obligation, and we must support his efforts.”

Not everyone agrees. “He’s been right to call attention to the crisis but he can overdo it,” said one aide involved in the UN climate talks. “After a while, that relentlessness language just turns people off, they stop listening.

“And he has been slow to recognize progress where it has been made. He was very negative about the outcome of COP26, and the problem is: Where do you go from there? What will he say about COP27, for example? You have to be able to say the positives, too.”

One of Guterres’s key themes is climate justice — how the poor and vulnerable, particularly in developing countries but also in rich countries, are most at risk in the climate crisis, and how the wealthy must take responsibility for their greenhouse gas emissions.

Could this alienate people with more conservative, right-wing views? That is a fear among a few observers, who argue that if the climate crisis is to be solved, voters across the political spectrum will need to be persuaded to act, with concerted global efforts within the next decade.

Yamide Dagnet, the director for climate justice at Open Society Foundations, said: “The secretary general’s strong, consistent and clear support for climate ambition is needed and refreshing. It is unfortunate that this strong and science-backed support is seen as a risk but it has paved the way for vulnerable countries to raise critical issues on adaptation, loss and damage, and keeping the 1.5 C target alive. He has been a champion at every turn, and I hope future secretary generals will build on it.”

One senior official who works closely with Guterres said: “He fully understands his role. He is utterly relentless in this crisis, and the worse the crisis gets, the closer we get to the tipping points, the more relentless, the more forthright, the more determined he gets.”

For many veteran climate experts, Guterres is the right secretary general at the right time. Rachel Kyte, the dean of the Fletcher School at Tufts University in the U.S., argues that the climate crisis — which for many people is complex, confusing and depressing — requires straight talking. As Guterres hits COP27 for what is likely to be another blistering attack on complacency and foot-dragging, she hopes he will continue.

“He is criticized for lacking nuance. But how nuanced should he be with the climate impacts eating away at chances for prosperity for the most vulnerable in society?” she said. “His ambition is for all of us — an ambition that we rediscover our solidarity in pursuing climate justice.”

Squashed by cars, slaughtered in their nests, Canada’s big snakes are under siege