B.C. needs fire. Meet the man bringing it back 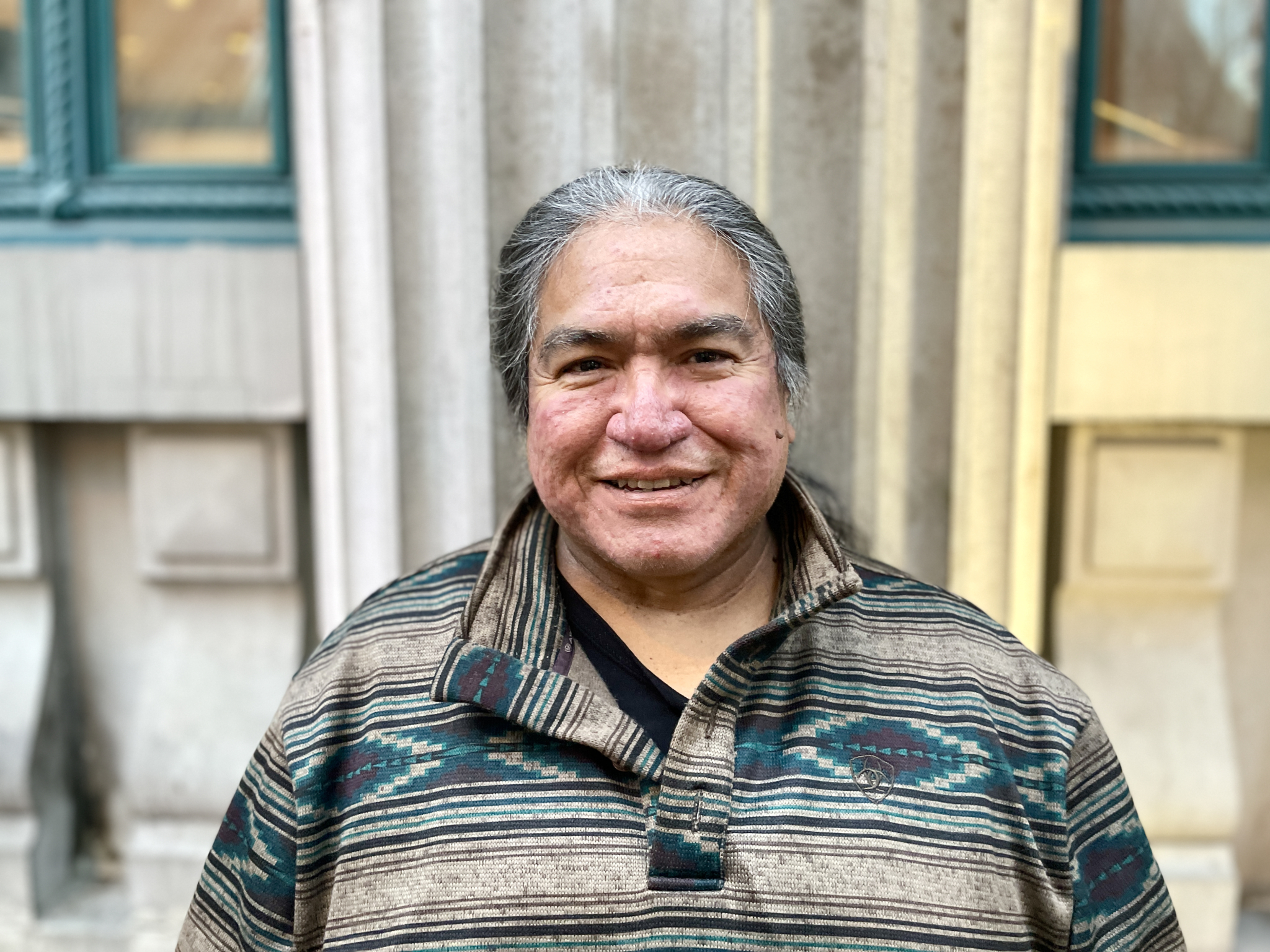 Joe Gilchrist has been working with fire his entire life, and is now trying to make Indigenous burning commonplace in B.C. Photo by Marc Fawcett-Atkinson/National Observer
Previous story

When Skeetchestn fire keeper Joe Gilchrist was young, he lived in a house where a wood stove was the only source of heat. He spent hours in front of the flickering flames, learning how they grew and moved as the fire slowly turned logs to ash. As he entered his teens, his grandfather taught him how to burn the forests and grasslands in the spring and fall on his people's traditional territory in the B.C. Interior.

"The grasslands, the meadows, the berries, the willow — everything is so much better with properly used fire," Gilchrist explained.

Cool fires helped medicinal plants grow and boosted forage plants for deer, he learned. Lighting them was an important cultural practice. It was also illegal. The fires were typically extinguished by the provincial wildfire service within hours.

Decades later, Gilchrist is on a mission to make the regenerative burning practices his grandfather taught him commonplace. At stake is an important practice for culture, food security and the future of the province's forests.

Forest fires have slammed B.C. in recent years, burning on average 348,000 hectares each year. They smothered the province in apocalyptic smoke and were responsible in 2020 for burning the village of Lytton to the ground. The problem is set to get worse as the climate crisis deepens, with experts predicting Western Canada will see up to 50 per cent more days with the dry, windy conditions that drive wildfires.

Climate change isn't the only problem. For nearly 100 years, B.C. has managed forests to make industrial logging as profitable as possible, planting dense tree plantations and suppressing moderate forest fires. Moderate fires like the ones Gilchrist's grandfather taught him to use were common before colonization and helped clear the forests of deadwood, eliminating a key fuel source for the dramatic fires common today.

"In the (B.C.) Interior, it's a fire-inclusive landscape," Gilchrist explained thoughtfully. "It needs fire … and if fire isn't put there, you start seeing the catastrophic fires like you're seeing now."

Traditional Indigenous knowledge and tree ring analysis show that cool, low-level fires swept through many of B.C.'s inland forests about once a decade, many of them lit by Indigenous people, Gilchrist said.

Tree ring records suggest the burning "pretty much stopped" in the 1860s, likely because of a smallpox epidemic that devastated Indigenous people in the region, he said. The fires picked up again intermittently after that, but by the early 1900s, had mostly petered out.

In 1912, B.C. created the Forest Act and the B.C. Wildfire Service to protect the province's forests from fire. The goal? Maximizing the amount of timber available for harvest by logging companies. The act made cultural burning practices illegal, threatening people with severe penalties for cultural burns. Later on, in the 1980s, it created teams of firefighters ready to put out fires like those Gilchrist's grandfather used to light.

Skeetchestn fire keeper Joe Gilchrist is on a mission to make the regenerative burning practices his grandfather taught him commonplace. At stake is an important practice for culture, food security and the future of B.C.'s forests.

The Forest Act — combined with other colonial policies, including residential schools — drastically reduced the number of cultural burns and threatened the existence of traditional knowledge on how to do them. The law made only a few exceptions for prescribed burns, mainly the ones logging companies used to dispose of wood waste.

By the time Gilchrist was a young man, there weren't many ways he could pursue his passion for fire and make a living. Joining the province's wildfire service was one of them.

He started fighting fires with the forest service around 1982, when he was 15 years old. After years gaining experience on the team, in the 1990s, he became the head of a firefighting team in Merritt, B.C. His boss at the time — respected fire expert Tom Lacey — "believed in cultural burning" and tried to integrate it into forest management around the city, Gilchrist recalled.

He started working more closely with Lacey and Nlaka'pamux fire keeper Harry Spahan in 1996 after transitioning to a full-time job with the province's wildfire service. They quickly noticed that every few years, people would light springtime fires in the same spots, then vanish to avoid being charged. The team had a hunch the flames were lit by Indigenous people practising cultural burning, but couldn't be sure. After mapping out the areas, Gilchrist's team decided to just let the fires burn, building barriers of less flammable soil to ensure it didn't get out of control.

"Instead of spending lots of money on firefighters putting a fire out, (we) just put the edges out, let it burn out and check it every two or three days," he explained. The approach was cheaper for the government and helped prevent dangerous fires in the summer by depriving them of the deadwood and grasses they need for fuel.

Despite the local fire district's acceptance of cultural burns in the 1990s, provincial laws continue to make them nearly impossible to conduct.

"For the most part, you can only burn on reserves," which don't fall under provincial jurisdiction, Gilchrist said.

The problem is B.C.'s "prescriptive" rules for intentional burns: people who are trying to conduct a cultural burn need to secure permission for a specific date far in advance, making it nearly impossible to adapt to the weather and fire conditions on the ground. If the conditions aren't good on the planned day, the cultural burn needs to be postponed, possibly for months, he explained.

"The government (needs) to step back, to not be so regulatory and authoritarian about the control of fire," he said. "Whatever they've been doing for 100 years, it's not working… Indigenous fire use is the way to go."

About five years ago, he partnered with Spahan, his former colleague in the 1990s, to create the Interior Salish Firekeepers. The organization is trying to make cultural burning commonplace on reserves and on the traditional territories of four First Nations in the Interior. Besides pushing for regulatory changes, they are creating a kindergarten to Grade 12 cultural burning curriculum for Indigenous schools.

"The students, especially when they're in kindergarten or grades 1 or 2, they're really drawn to that… As soon as you start a fire, they're right there," he said.

The organization also aims to secure funding for full-time fire keeper positions in each of the nations, said Jennifer Morrison, who is working with Gilchrist and Spahan on the project.

These people will help co-ordinate between their First Nation's government and other provincial or local authorities for burns. Conventional wildfire fighting jobs are relatively few, competitive and seasonal; the fire keeper positions would offer more sustainable and culturally relevant employment to young people who want to work with fire in each nation, she explained.

For Gilchrist, the dream is simple: Getting fire back on the land.

Editor's note: This story was amended to more accurately reflect the penalties inflicted by the early B.C. Forest Act cultural burning and to clarify that Jennifer Morrison is not a Registered Forest Professional.

Canadian company ‘misleading’ its investors in bid to build Brazil’s biggest open-pit gold mine in the Amazon, activists say

I wonder if all of the

I wonder if all of the wildlife affected by these planned burns would agree with this strategy.

It's entirely relative. Trying to have more control makes sense and like he says, what they've been doing sure as hell isn't working.