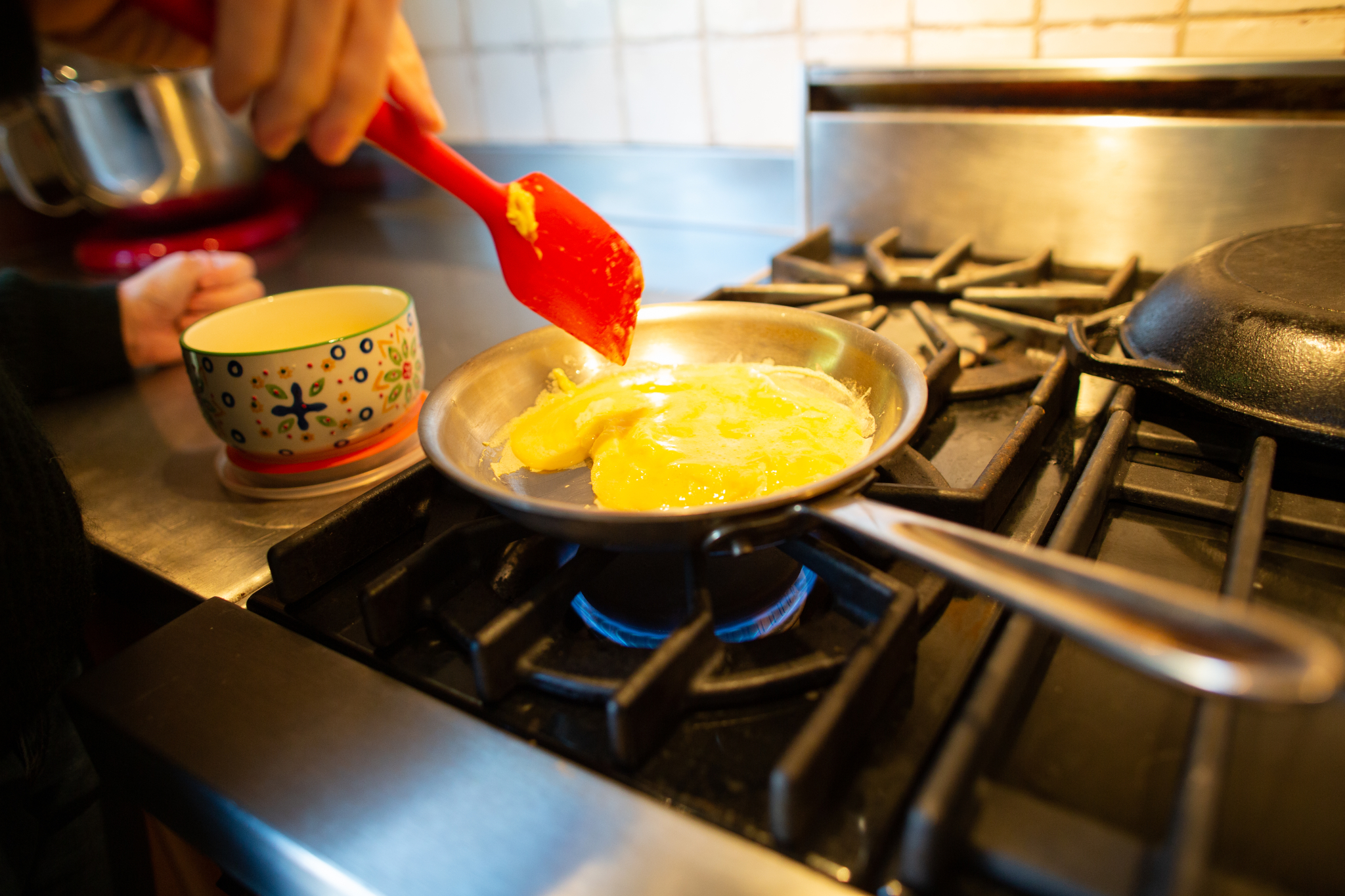 New research shows that gas stoves might be hazardous to your kids' health — and conservatives are melting down about it, writes columnist Max Fawcett. Photo by Jesse Winter for Canada's National Observer
Previous story

Ever since I moved out on my own at 18, I’ve coveted a gas stove. My dad, who became increasingly ambitious in the kitchen as he got older, would always preach the virtues of a powerful gas stove, and he was particularly fond of the one in his Toronto house that had six burners (including a pair with 30,000 BTUs of power). Using an electric stove to make dinner, he would say, is like driving a golf cart to work.

So why, after two decades of living in rental apartments and enduring their underpowered electric stoves, did I not switch over to gas in the first home I owned? Because there’s a growing body of research that was reaffirmed with a new paper released two weeks ago suggesting the culinary rewards aren’t worth the risks.

There is, of course, the negative climate impact of using fossil gas rather than electricity, especially in places where the grid is powered by clean sources. And while stoves burn a relatively tiny amount of gas, they’re a useful gateway for bringing gas into the home and enabling its other uses, like home heating and hot water. The gas industry understands this and has aggressively promoted gas stoves for years now.

But it’s the health impacts of gas stoves that have really grabbed people’s attention right now. A new peer-reviewed study in the International Journal of Environmental Research and Public Health drew a direct correlation between gas stoves and the risk of childhood asthma, and it attributed 12.7 per cent of current cases in the United States to the emissions they produce. This is hardly the first piece of research to draw that correlation, and it adds to the concern that public health experts expressed for years.

In response, the U.S. Consumer Product Safety Commission floated the idea of new regulations on gas stoves, while New York’s governor promised to make her state the first to ban gas appliances and heating in new buildings. U.S. President Joe Biden quickly knocked down the idea of a nationwide ban, but it hasn’t stopped conservative cultural warriors from pretending that the government is poised to seize them from people’s homes and businesses. “I’ll NEVER give up my gas stove,” Texas congressman and former Trump administration official Ronny Jackson tweeted last week. “If the maniacs in the White House come for my stove, they can pry it from my cold dead hands. COME AND TAKE IT!!”

As with most dumb American culture wars, especially ones that involve fossil fuels, this one has already made its way across the border. Jesse Kline, the National Post’s deputy comment editor, took a swing at it in a column of his own. “At the end of the day, this issue has more to do with climate zealotry than public health,” he wrote. “The left is doing its utmost to ensure that gas companies become the new tobacco companies, and so far, they seem to be succeeding.” Rob Anderson, one of Alberta Premier Danielle Smith’s triad of senior advisers, tweeted out a meme hinting at his (and her) willingness to take up this fight.

Gas enthusiasts have suggested the data here is being torqued, or at the very least overblown. And Gideon Meyerowitz-Katz, an Australian epidemiologist and public health communicator, suggested we all might want to pump the brakes just a bit here on the link between gas stoves and childhood asthma. “Personally, I would phrase the findings of this research as ‘gas stoves are associated with 6.3 to 19.3 per cent of current childhood asthma’ rather than arguing that this fraction of asthma is necessarily caused by gas stoves.”

Even so, that’s still a worrying data point. And the response from the Canadian Gas Association doesn’t exactly dispute the existence of that risk. According to a fact sheet, the best way to mitigate it is by installing “a range hood that covers all stove burners and vents to the outside of the building” and “cooking on the back burner and using the range hood on the highest setting.”

That you’d have to avoid using the burners closest to you and need to aggressively vent the byproducts outside is a major tell about the dangerous emissions coming out of those gas stoves. And as climate researcher Michael Thomas noted in his newsletter, this reliance on good ventilation is at odds with how most people use their stoves. “The industry talks about the best-case scenarios for air quality and ventilation,” said Rob Jackson, a researcher at Stanford. “In practice, we don't typically find the best-case scenarios in people's homes.”

That’s why the industry is pivoting to a more familiar (and effective) argument: it’s what the very best cooks prefer. But a growing number of those experts — professional chefs and cooks — stepped forward to make the case for induction, a technology that delivers all the power and control of a gas range without any of the noxious side-effects. In a long “ask me anything” thread, New York Times author and chef Alison Roman fielded dozens of questions about induction cooking and why it isn’t some sad compromise to gas.

New research shows that gas stoves might be hazardous to your kids' health — and conservatives are melting down about it. @maxfawcett writes for @NatObserver

But this isn’t an issue that’s going to be resolved with pragmatism and common sense. Like most fronts in the increasingly deranged culture wars we’re seeing — witness the far-right’s freakout over M&Ms, of all things — this fight will produce far more noise than signal.

The good news is that most of us can take comfort in two things: no, the government isn’t going to take away your gas stove, and yes, the growing awareness of non-gas options and the health benefits they offer will make them increasingly scarce. No amount of tantrum-throwing, on either side of the border, will change that.

The future of rare cold-water coral garden on B.C. coast is still on the line

I had a gas stove in my first

I had a gas stove in my first home. Removed it when we renovated the kitchen because it made my wall so dirty. Yes. Back in the day we washed our walls once a year. But even then, I didn't do the dot connection and ask....if all this greasy yellow stuff is on my wallpaper, is some it also in my lungs???

Our technological certainties and quick jumps to foregone conclusions have a tendency to make us dumber than we should be. Today I have an induction range, but even there, we bought it because it was the only white one available!! I can't stand the work it takes to keep stainless spot free.
Only wised up a couple of years ago when I read the asthma news. My daughter had a gas stove, my son-in-law asthma. We removed it for an induction. Last year, when our son bought a 1070's one owner bungalow and the ancient electric stove needed replacing, we treated those grandchildren to an induction range.

INDUCTION WORKS WONDERFULLY...is the cheapest on electricity requirements, and comes with 0 pollutants. The fossil fuel industry lies about just about everything....minimizes the risks, maximizes the supposed advantages.

That we have been sucked into their vile propaganda for so long bodes ill for the future. But then, we have it all boomsters will be dead by then, so I suppose it doesn't matter...so the Hot Air continues on most channels.

We eliminated, not just gas,

We eliminated, not just gas, but the whole obsolete concept of "the range", which was obsolete the day you didn't need to leverage one firebox into both a stove and an oven.

We've been so happy with this solution, which cost half as much as the "broken" (crucial parts all fine, it was the stupid, not-needed *computer circuit board* that died) range that it replaced.

I made fast-fry "spam fried rice" last night, and never needed to go past 7 on the 8-setting induction plate. I think 8 is just for heating up water fast, I can't imagine what cooking would require it.

It was so nuts to have $2000 go to the dump because a $2 part inside was broken and repairmen said they weren't made any more. (Same with the circuit-board on the dryer. another year). A modular kitchen can only ever have a few hundred dollars break on you at a time. No replacement items is unable to fit in a car.

Pardon the evangelism, but just follow us, when your range breaks.

We swapped out the gas over

We swapped out the gas over for electric in September. In a 24" width, we couldn't buy an induction top, so it's a flat surface with resistance underneath. Heats wildly faster than the gas did when on high. An interesting recent article in the Tyee cautioned against suggesting induction is the only choice, claiming it's only about 10% more efficient than electric (backed up here: https://www.leafscore.com/eco-friendly-kitchen-products/which-is-more-en...) and is pricey enough to be out of range for some. We're very happy to be off gas; Enbrige retrieved the meter some months later.

"Pricey" made my jaw drop.

"Pricey" made my jaw drop. Check out my link above, we saved a lot of money by switching to induction, by just avoiding a single giant appliance and buying 120V small appliances instead. Unless you have a real need for a very large oven, (larger than needed for a 10kg turkey), there's just no point any more.