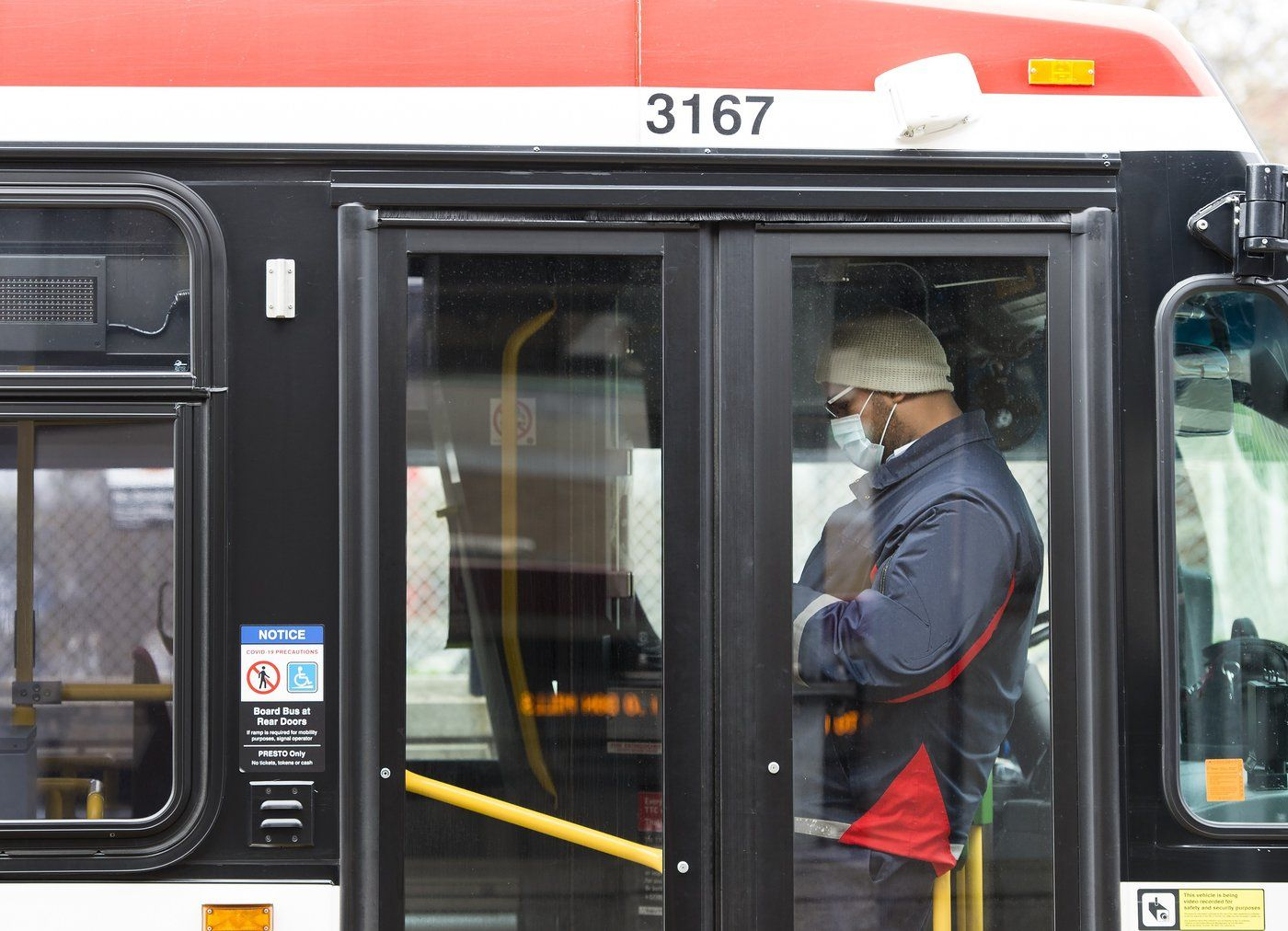 A TTC worker is shown in a bus while on shift in Toronto on April 23, 2020. File photo by The Canadian Press/Nathan Denette
Previous story

Violence against transit workers is unacceptable and needs to be addressed by multiple levels of government, the president of the union representing Toronto transit employees said Tuesday following two attacks on uniformed staff less than 48 hours apart.

Four 13-year-old boys have been charged with assault after they allegedly attacked two uniformed Toronto Transit Commission employees who were on their way to work by bus Monday afternoon. Police said Tuesday there was an altercation between a group of boys on the bus before the alleged assaults.

That incident took place after police said a TTC bus driver was shot with a BB gun while waiting to take over a bus on Saturday evening, with the suspects described as possibly teenagers.

"Transit workers should not feel at risk just simply coming to work and waiting for their vehicle, or riding to their vehicle, or simply just wearing a uniform in public," ATU Local 113 president Marvin Alfred said in an interview Tuesday.

"These are not isolated incidents. There is a problem right now in transit. There is an issue regarding safety in transit and this needs to be addressed actively. The TTC, the province, the city itself needs to address these concerns."

Toronto police previously said officers responded to the city's east end Monday afternoon where a group of 10 to 15 youths, all male, allegedly assaulted two TTC employees. Police are continuing to investigate after laying charges against the four 13-year-olds and anyone with information is being asked to contact investigators.

Police had described the employees' injuries as minor.

The TTC called the attack a "despicable" swarming and assault.

Saturday's shooting of a bus driver with a BB gun did not result in injuries, police said, with the suspects described as possibly male teenagers.

Alfred, the union president, said while there has been an increase in the number of violent acts targeting transit workers in recent months, he has no information to suggest more young people are involved.

"We just want it to stop, period. Regardless of who the assailants are, these acts of violence need to stop," he said.

Youth and transit violence have captured the public attention after a number of high-profile incidents.

That same month, a woman was stabbed to death and another was wounded in a random attack on a Toronto subway train. Last week, a person wearing a religious head covering was struck by a man in an alleged hate-motivated assault, police said.

On Tuesday, a woman was stabbed in the head and face while riding a streetcar in the city. Another woman was arrested in that case and will face one count of aggravated assault, police said.

The 55-year-old, who worked as a bus driver between 1988 and 2018, said he was physically assaulted at least three times throughout his career, including being slapped on the face at a transit station after telling a man he needed to pay his fare.

"The person just turns around and slaps me in the face and keeps walking," he recalled.

"The person's gone into the subway station ... I'm not injured, so it's not a priority call," he said. "That particular slap was witnessed by other employees, and they went, 'Are you OK? Someone should do something about it.' And I said, 'what's the point? The guy is already gone.'"

Ortiz said he learned over his career that avoiding confrontation was the best way to stay safe while driving a transit bus.

Toronto Mayor John Tory has said acts of violence and disrespect against transit workers need to end. He also said he was very concerned about what he called the "increasing number of criminal acts involving young people.''

Tracy Vaillancourt, a University of Ottawa professor and Canada Research Chair in children’s mental health and violence prevention, said while crime involving youth has steadily gone down over the past two decades, swarming attacks are “something we have to pay attention to” because their “consequences are enormous.”

She said a group or mob mentality could be one of several factors behind those attacks.

“They have really poor risk appraisal when they are in groups, so the more teenagers you put in a group, the worse their risk appraisal is. And so it could just be that they got caught up in it," she said.

Vaillancourt said teens are sensitive to social cues, meaning they are more likely to copy behaviours.

“If they see others doing something aggressive that is rewarded and it could be rewarded in the sense of notoriety and attention that you get from the media blowing it up, then that could be quite exciting for them.” she said.

Boredom and social media are also possible factors, she said.

“Social media is going to play a role in this too, just because they're probably co-ordinating (among) themselves and watching videos and getting excited about what they're seeing.”

She suggested governments invest in teaching social and emotional skills in the early stages of childhood to increase empathy, make sure children can manage frustration, and equip them to control impulses.

- With files from Maan Alhmidi and Sharif Hassan.