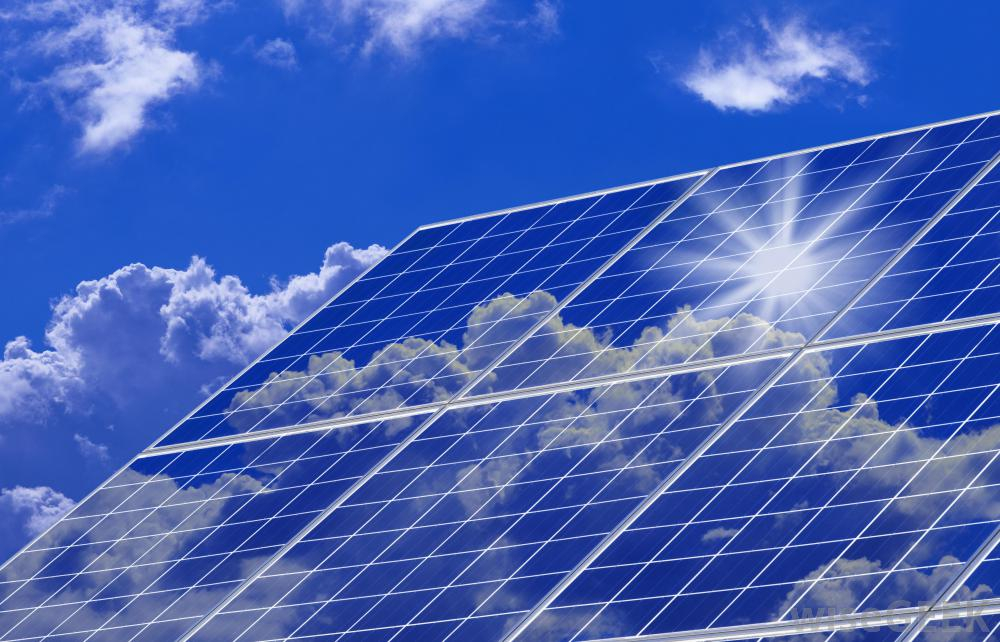 Nodelman, an environmental engineer, said he had been assigned to develop a solar energy pilot project for an Edmonton utility company where he worked.

He started by looking in the Yellow Pages.

“We knew nothing about solar installations at the time,” said Nodelman, today a climate change consultant.

He eventually found Gordon Howell in the listings. He phoned Howell - an engineer with expertise on renewable energy installations - and asked whether he could help.

It turned out that Howell, who had been researching the efficiency of solar photovoltaic cells for the federal government at Natural Resources Canada, was the right person for the job.

Many employees at the utility company - Edmonton Power - were skeptical. They saw solar as an expensive and unviable alternative.

At that time, they were right.

The project cost $55,000. Even though the solar energy generated savings on electricity costs, it would still take 210 years for those savings to pay off the initial investment. Twenty-one years later, Howell estimated that a solar project of that size would cost only $9,000, and take 18 years to recover its costs at current electricity rates.

“We anticipated we would be paving the path for the future of solar technology in Alberta,” said Nodelman.

Solar energy production and capacity has grown exponentially ever since then.

Over the last six years in Alberta, it has grown by 84 per cent annually and If this trend continues, Howell estimated that the province would have 2,000 megawatts of PV capacity installed by 2024 – enough power for 275,000 homes or over half of all Calgary’s households. That would be 220 times today’s nine megawatts of PV installed capacity.

A solar industry lobby group estimated this could bring up to $5-billion in new investment and 70,000 new jobs for Alberta. But the industry faces fierce competition in the province’s deregulated electrical market as well uncertainty surrounding the climate change policies of Alberta Premier Rachel Notley's NDP government. It also hasn't yet announced details of any incentives to encourage more renewable energy as it pursues plans to phase out coal power plants.

New jobs in Alberta would be welcome in the fossil fuel-rich province, pummeled in recent months by the decline in global oil prices. Federal Finance Minister Bill Morneau noted in his recent budget that paid employment in the province had fallen by about 65,000 since October 2014 when oil prices started their precipitous decline. Over 95 per cent of those positions were lost in industries directly related to the oil sector, the budget said.

The decline has also had more substantial impacts on the rest of the Canadian economy and government tax revenues.

For the solar industry, Howell and Nodelman said some of its first steps in Alberta were spearheaded by the late Tooker Gomberg, an influential environmental leader who served on Edmonton's city council in the 1990s.

In 1993, Gomberg proposed to install a solar-electric system on on the roof of city hall. The city council voted against the idea after the Edmonton department of public works said the plan would damage the building.

But this didn't stop Gomberg, who kept pushing the city-owned Edmonton Power, today known as Epcor, to introduce some solar energy projects into its portfolio.

“He bothered Edmonton Power so much, that Edmonton Power asked its sustainability department to explore this,” said Howell, a managing partner at Howell-Mayhew Engineering.

This was when Nodelman was assigned by Edmonton Power to pursue the pilot project.

Two decades later, solar technology is getting cheaper. The cost of solar equipment, such as the panels and inverters, has dropped by 70 per cent in the last four years, and the cost of entire solar systems are expected to fall 40 per cent more by 2020 according to John Gorman, president of the Canadian Solar Industries Association, the industry lobby group.

But not everyone believes that Alberta should be betting its future on solar energy. Steven Paget, director of institutional research with FirstEnergy Capital Corp, said that Howell has made a lot of assumptions in his projections.

“Two gigawatts are plausible, but for solar, it is hard to pave its way without a form of government subsidy,” said Paget.

Alberta is a unique market because most electricity isn’t used in the summer but in December when days are short, said Paget. As a result, he said the government shouldn't promote solar energy.

“I can’t endorse the idea Alberta should endorse solar,” says Paget. “Any targeted initiative to put solar in the grid would have to consider that wind is a lower cost renewable and produces a higher capacity... We are a rich wind province.”

Currently, the largest solar farm in Alberta and Western Canada is East of Calgary. The Green Acres Hutterite colony built a two-megawatt system without government subsidies. The community made an initial investment of $4.8 million, and the project is expected to recover its costs through energy savings within 15 years.

But in Vulcan, Alta., EDF Energy Nouvelle Canada (EDF EN) is planning a project 30 times larger. The company is a subsidiary of Électricité de France S.A. – the largest worldwide power producer with $350 billion in assets.

EDF EN has proposed a 60 megawatt solar farm, 50 kilometres north of Lethbridge. It would produce enough power for 8,520 homes. The company aims to have the project operating by the Fall of 2018 at a cost of $150 million.

David Warner, a development manager with EDF EN, said that solar power is competitive in some southern US states. He added that the costs are continuing to drop.

“We’re confident those savings will soon find their way north of the border,” said Warner.

EDF EN hasn't made a final decision on its proposed farm, but Warner said he was confident the project would be approved.

However, EDF EN isn’t alone. Suncor, BlueEarth Renewables Inc., SunEdison Inc., and GTE Power Corp are also proposing large solar farms. The five firms have proposed a total of eight separate projects, including the Vulcan solar farm. Together, these projects, if completed, would require up to $900 million in new spending by the companies. They would also produce up to 352 megawatts of electrical generating capacity.

Industry observers believe this is the tip of the iceberg since some of Alberta’s big energy companies such as Enbridge, TransCanda, Enmax, TransAlta, and Epcor have not yet entered the provincial market.

Enbridge already operates over 2,500 megawatts of wind energy and over 150 megawatts of solar energy in Ontario and the U.S. Meanwhile, TransCanada operates eight solar power facilities in Ontario that generate enough power for about 12,000 homes. Both companies are well-positioned to lead the renewable energy shift in Alberta thanks to their financial standing, said a recent report by Bloomberg.

“Companies are getting ready for the starting gun,” explained Howell. “They want to be ahead of the race.”

Howell said companies like these are also preparing for the provincial government to announce new renewable energy policies.

“In the absence of any kind of incentives, these projects will not be built,” said Donald.

In Alberta, AMP Solar has projects in a development stage that would collectively generate about 100 megawatts of power, Donald said.

“We are all doing this without knowing what the rules of the game are,” said Donald. “Having more clarity will be helpful, but we have an idea of what it will look like.”

However, Warner was optimistic. As solar technology continues improving, he expects to see more large scale projects such as EDF EN’s proposed solar farm in Vulcan.

“The strong (solar) resource coupled with a mandate to increase the volume of renewables help set the stage for more sites like Vulcan Solar,” said Warner.

John Gorman, president of CanSIA, explained that solar energy projects could benefit from Alberta’s electricity hourly rates since they collect energy during the day when there is more demand and higher prices for consumers.

David Vonesch, chief operating officer with Skyfire Energy, said that during the day, the price can peak at a rate that is 65 per cent above average. These higher prices offset the higher investment required for solar projects, he explained.

However, fluctuating electricity prices make it hard for investors to ensure predictable returns from building new power plants. This is a barrier for all projects, but especially challenging for renewables, Gorman said.

Natural gas power plants use costly fuel to generate electricity, but companies can decide when to operate them. Meanwhile, solar doesn’t need fuel, but companies make more investments up front, and they can’t control when electricity is produced.

Gorman said the problem in Alberta for solar isn’t the cost of technology or the solar recourse, but the market structure.

“We need rules to be changed in the market.”

Donald, from AMP Solar, said large solar farm plants are being proposed with the future in mind.

Today, Alberta has more electric power than it needs, according to Howell, who estimated there was a 60 per cent oversupply of energy.

“You can’t build anything today and make money,” said Donald.

However, Donald added that companies are anticipating higher electricity demand in the future as well as a looming gap because of the government's proposed phase out of coal power plants. They also see opportunities for new projects because of the Notley government’s target of generating 30 per cent of its electricity with renewables by 2030.

“Depending on how you do the math, there will be somewhere between 7,000 to 10,000 megawatts of new renewables.”

Alberta should invest in

Alberta should invest in solar and wind to create jobs because well paid jobs in the oil sector are not coming back. Despite the low price of oil, production is still going up with apparently not many more jobs being created in the sector. Companies are implementing new technologies that will reduce considerably the need for new workers (they are even thinking replacing truck drivers with self driving vehicles). Texas, which is still the largest oil producer in the U.S., is creating more jobs in the renewable sector than the oil and gas sector. Texas leads the U.S. in wind energy producing around 11% of the state total energy with more than 18,500 megawatts. It is creating thousands of well paid jobs in the installation, maintenance and manufacturing of wind turbines.
In 2015, the U.S. solar industry has created more jobs than the oil and gas sector combined. With a great solar potential, Alberta could become a leader in renewable energy in Canada. It would help create more jobs, and reduce Alberta's GHG emissions which are still the highest per capita in Canada (after Saskatchewan) and among the highest in the world.

I agree that we should be

I agree that we should be building the renewable sector here in Alberta. But I worry about the preponderance of large companies with their eyes on the solar market. Solar provides a chance for individual home owners and farmers and perhaps co-ops to wrest control from the big companies. Leaving it to the likes of Suncor is asking the same companies that created the climate mess to fix it. Also, it risks perpetuation of our existing undemocratic dictatorship of the share holders.