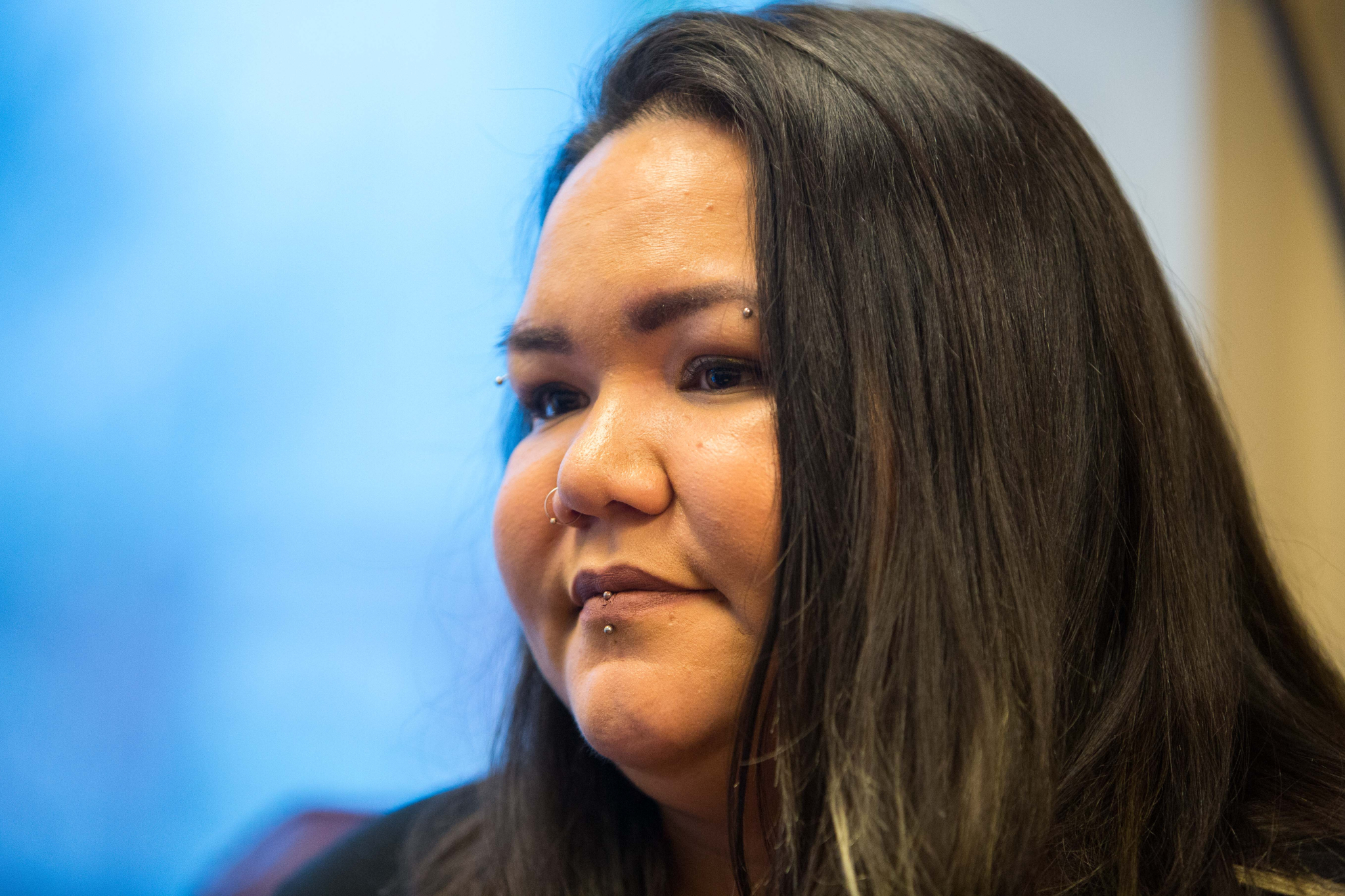 Jaylene Delorme-Buggins, seen in Ottawa on Jan. 22, is a role model for We Matter, an initiative with a message for Indigenous youth that no matter how hopeless life can feel, there's a way forward. Photo by Alex Tétreault
Previous story
Next story

Jaylene Delorme-Buggins was about seven years old when she saw her sister stick a needle in her arm.

The 24-year-old Yellowknives Dene from Hay River, N.W.T. said she grew up in a broken home, with a lot of unanswered questions about her cultural identity. She was sexually assaulted as a child and again later in life. She got into drinking and drugs early on, landing first in a treatment centre and then foster care. She left home at 16 and things got worse.

Delorme-Buggins eventually turned her life around and now holds multiple positions at the Native Women’s Association of Canada and is cooking up plans for a business venture. But in between, she lost her sister, Toni-Lynn Buggins-Godin, as well as a good friend to drug overdoses.

She told her remarkable story to National Observer on Jan. 22, on the sidelines of a two-day suicide crisis summit in Ottawa. The summit, called the Hope Forum, was hosted by Indigenous-led non-profit We Matter. The group, founded in 2016, gets Indigenous role models to discuss their experiences of overcoming hardship in short videos.

Suicide and thoughts of suicide occur at rates that are several times higher for Indigenous people than for other Canadians, but it doesn’t have to be this way, We Matter insists. Their message: “No matter how hopeless life can feel, there is always a way forward.”

Delorme-Buggins is now one of those role models. As her teenage years progressed, her life spiraled into deeper and deeper abuse. By the time she was 21, she says she was using cocaine on a daily basis, leading to sleepless nights for days on end. She ended up in the hospital because she couldn’t stop spitting up blood.

“That wasn’t even a wakeup call,” Delorme-Buggins recalled. “Maybe about a week. Then I went back to it.”

She began selling drugs to support her habit. At one point she fed one of her sister’s relapses, she remembers painfully. “I sold to her, so I could take for my own addiction, to keep going,” she said, fighting back tears.

In 2016, her sister would die from a crystal meth overdose after cardiac arrest, she said. It’s something she still hasn’t gotten over.

But despite being pummeled with such harsh life conditions, Delorme-Buggins began taking care of her sister’s kids after she died. She realized she needed to provide for them.

She applied for college, with plans to pursue a bachelor’s degree. Driven to succeed, she recalls happily how she raced to achieve credentials, getting an entire grade of math and English done in two and a half months.

Through school, she heard of opportunities like Daughters of the Vote, an initiative of Equal Voice that let her sit in the seat of her MLA and discuss women in office. She was a winner of the Native Women's Association of Canada's aboriginal entrepreneurship conference. She went to Kelowna, B.C. to engage in a discussion on the repatriation of Indigenous artifacts.

Turning her life around wasn’t easy, but now she feels like she’s climbing mountains all the time. “I matter, and you matter, and you’re going to make it someday, and I know you can do it, because we matter,” she said.

The two-hour roundtable on Jan. 22 was held at the Wabano Centre for Aboriginal Health in Ottawa, and broadcast live on Facebook. The social media giant co-hosted and facilitated the event using 360-degree live video technology.

The moderators, co-creators Kelvin and Tunchai Redvers, walked the crowd through different sides of the youth suicide crisis, passing a microphone around to hear firsthand experiences.

“When discussions happen, too often the youth voices aren't heard...we think that the youth have the solutions for these problems,” said Kelvin.

Many hands went up when he asked at various points who in the crowd had family or friends lost to suicide, or who had attempted it themselves.

"Indigenous youth have a particular hardship because their identity has been fractured and dismissed, and that doesn't sit well with themselves or inspire confidence,” said Ricky-Lee Watts, another We Matter role model, in an interview with National Observer on the sidelines of the event.

Watts, who is now an intern with the provincial government in British Columbia, said when he was younger he didn’t see a future for himself. But after a number of experiences, he said he learned to embrace vulnerability and to ask for help.

"When Indigenous youth see a campaign like this, they see other Indigenous youth out there in the world and — particularly with this campaign — share a message of hope of how someone's worked through these experiences, like myself,” he said.

The stories told at the forum were wrenching: friends and family who struggled with suicidal thoughts; a cousin who struggled with depression and anxiety, who killed himself at 20 years old; a best friend who stopped her friend’s overdose — and then took her own life a year later.

At several points, speakers broke down in tears or grief. Supporters came over to comfort them. The stories of rejuvenation got spontaneous applause.

Many stories reflected the history of residential schools, or other systems of oppression that existed in Canada, and how trauma was perpetuated through generations.

Redvers said he also felt many stories reflected how, at the moment that help was needed, it wasn't there. “It seems like the grassroots” is the most effective way of getting resources out to communities, he noted.

Speakers also noted discrimination in the mental health system and long travel times for people seeking medical help. Employers need to create safe spaces for Indigenous youth, and establish policies to address the issue of racism in the workplace, others said.

Still others said community efforts, like healing circles, also should receive more funds. Two-spirit issues should be given more prominence, and Indigenous youth representatives should be placed inside more organizations.

Asked what he’d like to see, Watts pointed to funding for culture and identity to support youth empowerment. "You're planting seeds,” he said, showing the importance of land for sustainability of food, spiritual elements, and holistic health.

‘The most important conversation’ in Canada

Philpott said she couldn’t promise to act on all the comments, but did promise to listen and take them into account. “This is the most important conversation happening in Canada right now,” she said to the crowd.

The government was looking at fixing three layers of support, she said. First was mental wellness supports in communities, with people who understand the context of intergenerational trauma. Second was access to decent living conditions, clean water, and other social determinants of health. The third was a proper recognition of rights.

“Until we can transform our country based on a recognition of rights, we'll never solve the mental wellness challenges,” she said.

At a press conference on Jan. 23, Philpott outlined the role of her new department, Indigenous Services, created when the Trudeau government split Indigenous and Northern Affairs Canada in half at the end of August. Carolyn Bennett, formerly the departmental minister, now leads the Department of Crown-Indigenous Relations.

Philpott has previously said the government will target the high rate of tuberculosis among Inuit, and noted that she is organizing a two-day meeting on Indigenous child welfare later this week in Ottawa.

She has also described the new department as planning for obsolescence — the day, sometime in future, when Indigenous communities will provide services for themselves, and the government will enter into agreements with them, instead of providing services directly.

On Tuesday she pointed to the B.C. First Nations Health Authority, which designs and manages First Nations health programs and services in the province, and the Manitoba First Nations School System, the first ever Canadian Indigenous school system, as examples of what those kind of agreements will look like across the country.

A excellent article. The

A excellent article. The Minister of Indigenous Services Jane Philpott is on the right track in my opinion. The sooner Indigenous people can be there own masters and out from under the Governments thumb via the Indian Act, the better.
Continually providing Money with no oversight ends up with nothing getting done and the individual members of the band having no say. It does not work in any segment of society.

We will have to wait and see if the words turn into action under the Liberals. All members of parliament Liberals, Conservatives, New Democrats and Green Party need to buy into the proposals and see that they continue no matter who is the Party in power. This applies to the Provincial and Territorial governments as well.