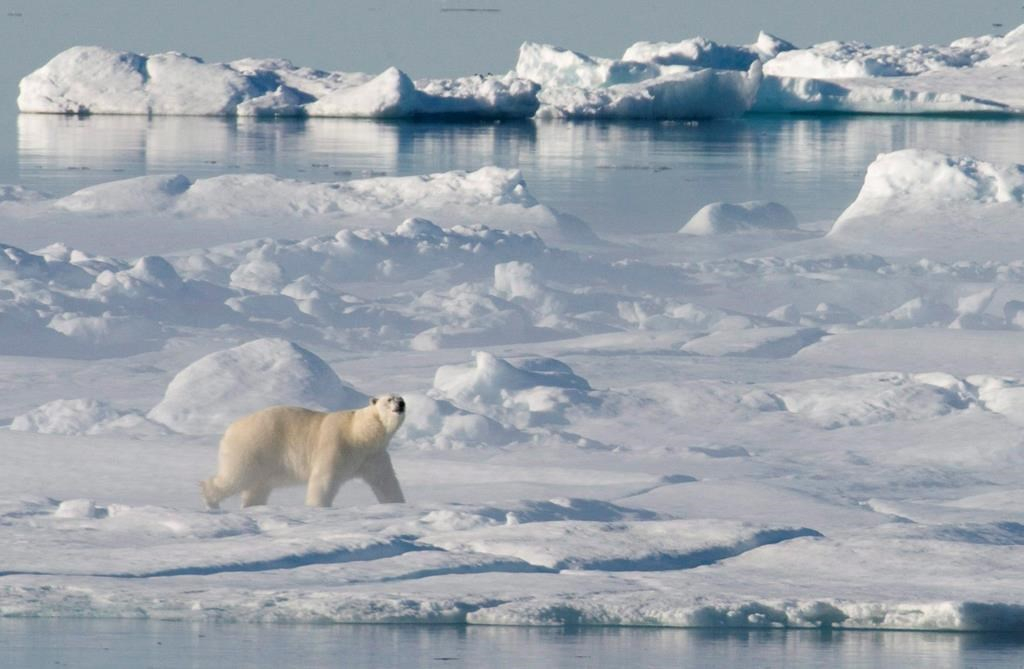 A polar bear stands on a ice flow in Baffin Bay above the arctic circle as seen from the Canadian Coast Guard icebreaker Louis S. St-Laurent on July 10, 2008. File photo by The Canadian Press/Jonathan Hayward
Previous story

The federal government has released its long-awaited policy on developing the Canadian Arctic in a changing environmental and political world.

But after three years of work on the lengthy document, some are left asking, "Where's the caribou?"

The document proposes eight priorities. Health, infrastructure and economic development are at the top.

It mentions a shopping list of northern asks: from roads to resources to housing to high-speed internet.

The framework offers no timetables, funding guidelines or plans for what comes first.

"It's basically saying trust us, re-elect us, and we'll figure out how to do it next time," added Rob Huebert, a political scientist at the University of Calgary.

Northwest Territories Premier Bob McLeod was less than generous in his praise.

"It's a living document," he said. "We will work to improve on it."

"We'll be a lot happier when there's more tangible stuff that comes out."

Whitney Lackenbauer, an Arctic historian at Trent University, points out that the policy acknowledges it doesn't represent a consensus.

"I found myself asking, 'What is the overarching vision here?'" he said. "I think it speaks to the electoral process truncating something that was midstream."

Crown-Indigenous Relations Minister Carolyn Bennett defends releasing the plan mere hours before an election call. She said it took so long because so many — First Nations governments and groups as well as three territories and four provinces — were consulted.

"It is the pace of our partners. It's been very exciting to develop it this new way.

"This kind of collaboration we believe is necessary. No longer are these policies written in Ottawa and visited upon people in the North."

"In Phase 2, it'll be our partners that will help us develop the governance and the implementation plan."

That's a failure, said Huebert. A real policy document would include hard choices and a future direction.

"I'm looking for signs of actual policy decision where they said, 'We are going this way,' rather than promises that we will do that."

Without seeing dollars attached to them, Savikataaq is wary of the pledges made in the document.

"We were hoping there would be some kind of budget attached to something, or timelines. What we need is concrete stuff here."

Byers pointed out the document may confuse international observers as well. Parts of it talk about the Arctic as a zone of co-operation, while other sections discuss rising threats and uncertain security.

"There will be a team of people in Beijing reading these documents right now and trying to figure out what they mean. This isn't that crystal-clear, forward-looking statement of an Arctic power that Canada might want to make on the international stage."

For Savikataaq, an Arctic policy is simple and could be implemented tomorrow.

"The feds have to do some nation building."

So far I have heard nothing

So far I have heard nothing from federal candidates regarding plans to build a presence and protect Canada's sovereignty on the northern border. Ask your candidates.