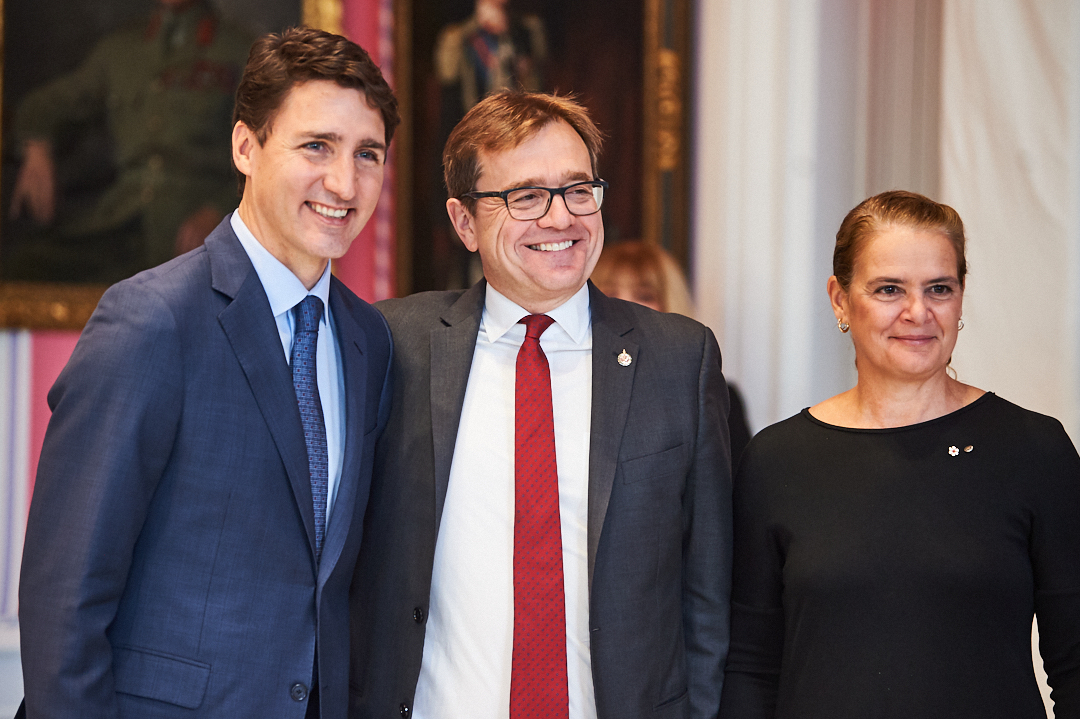 Following an election that trimmed the governing Liberals to a minority, Prime Minister Justin Trudeau showed no sign of dropping his government’s stated commitment to climate action when he unveiled a new cabinet Wednesday. But whether the government will act strongly enough to address the climate emergency remains to be seen.

Jonathan Wilkinson — former minister of fisheries, oceans and the Canadian Coast Guard — was sworn in as the minister of environment and climate change. But there is other climate clout in the cabinet. Several new ministers bring real world experience from the environmental sector — including former Greenpeace activist Stephen Guilbeault and Toronto-area Greenbelt advocate Deb Schulte, who chairs the Standing Committee on Environment and Sustainable Development.

The announcement was welcomed with cautious enthusiasm by environmental activists and academics. A cabinet that includes a “stronger field of notable environmental advocates” could shift the balance of internal debate, despite not being given direct oversight over climate related files, said Dale Marshall, national program manager at Environmental Defense.

That shift in environmental debate will, most likely, start with the party campaign promises. The Liberals committed to a robust climate agenda during the election campaign, including a focus on clean-fuel standards, the phase-out of coal, support for green finance, energy efficiency and renewable forms of energy such as solar and wind power. And the party promised to build out a zero emission vehicle strategy, but that has not yet been fleshed out into policy.

Fulfilling campaign promises will be one thing. But what happened before parliament was dissolved for the election may be a bigger challenge for the new government’s climate plans.

Trudeau’s government nationalized the Trans Mountain Pipeline expansion in May last year. Buying a pipeline and its planned expansion sparked environmental protests across the country but it didn’t prevent growing resentment towards the Liberal government in the western oil-producing provinces, who have yet to benefit from any additional capacity on the link to the Pacific coast. (Legal challenges continue to dog the project)

Now the new minority Trudeau government needs to develop a plan to deal with alienation of those in Alberta and elsewhere in the country who rely on the oil and gas industry while following through with environmental promises like the one to implement “legally binding” targets of net-zero carbon emissions by 2050.

And the man at the front of it all is Jonathan Wilkinson.

Wilkinson told reporters outside Rideau Hall after the swearing in ceremony on Wednesday that “Canadians were pretty clear during the campaign that they want strong action on climate change”. To which reporters asked how, exactly, he was going to do it.

Wilkinson’s background gives some strong clues about how he might do it.

Wilkinson, who replaced Ottawa-area MP Catherine McKenna as environment minister, has a working relationship with B.C. Premier John Horgan, the most vocal opponent of the Trans Mountain expansion among provincial leaders. Wilkinson worked with Horgan on environmental initiatives, such as a joint federal-provincial initiative to protect wild salmon populations, back when he was fisheries minister. And he has more western cred. Wilkinson grew up in Saskatchewan, he went to university there and sowed his early political roots as an advisor to former premier Roy Romanow.

Wilkinson also understands the workings of the ministry. He was McKenna’s parliamentary secretary in the last Trudeau cabinet.

But what might be the real key to how Wilkinson will do was the thing he told reporters in response to the question: “I spent 20 years in clean tech before I got into politics”.

Wilkinson, who was first elected in his North Vancouver riding in 2015, was previously CEO of clean tech companies QuestAir Technologies and BioteQ Environmental Technologies (now BQE Water Inc.,which treats water for the mining industry) and an executive at renewable energy and fuel company Nexterra, as well as at management consultancy Bain & Company.

But Marshall and others warned Trudeau’s minority government could yet decide that their electoral losses in Alberta and Saskatchewan require actions that work against efforts to reduce the country’s greenhouse gas emissions.

“Whether the Liberals are willing to address production and emissions coming from the oil and gas sector will determine whether they are successful on climate change,” said Marshall.

Indigenous, environmental and public interest groups wasted no time challenging the new cabinet to live up to those promises (and another to build nation-to-nation relationships with First Nations, Inuit and Métis peoples) by rejecting Teck Resource Ltd’s Frontier mine proposal.

The Alberta government of Premier Jason Kenney gave its approval to the project in late October, moving the regulatory process to Ottawa where it is now pending federal cabinet approval.

The decision will be a key early indicator of how this cabinet configuration will direct itself when it comes to the thorny nexus between environment and energy.

The Frontier site is located about 110 kilometres northwest of Fort McMurray, and is expected to produce about 260,000 barrels per day of bitumen once operational, according to Teck.

The major open-pit oil sands mine proposal is also located on Treaty 8 territory in a pristine area home to the last wild, disease-free herds of Wood Bison, and on the migratory path of the endangered Whooping Crane, a coalition of northern Alberta students, Indigenous community members, scientists and workers said in a statement.

The mine would cause “irreversible harm” to the Peace-Athabasca Delta and “directly compromise” Canada’s ability to reach its Paris Agreement targets, said the group, which includes Indigenous Climate Action, Climate Justice Edmonton, the Canadian Parks and Wilderness Society, Keepers of the Water and Oil Change International.

“We shouldn't try to fool ourselves,” he said. “Getting to net-zero emissions means phasing out the production and consumption of fossil fuels.

“That’s going to be incredibly hard to do in a way that deals fairly with the workers and regions currently dependent on oil, but the only thing harder would be to suffer the consequences of failing to make this transition."

Alberta's Kenney called on the newly-formed government to pay his province $1.73 billion as an equalization rebate.

“With no ministers from Alberta, I hope that ministers with portfolios of especially urgent interest to our province will listen to Albertans, take our concerns seriously, and work constructively with the Alberta government to address them,” he said in a statement.

“Adding to Albertans’ frustration is federal policy aimed at the heart of our economy and intruding into our provincial jurisdiction,” he said. “The federal bills C-69 and C-48 hurt energy production and drive away investment by making it next to impossible to transport and sell our oil for a fair price.”

Bill C-48 bars oil tankers from loading at ports on the northern coast of British Columbia, while C-69 imposes tougher requirements for major resource-exploitation and transportation projects to consult affected Indigenous communities, widens public participation in the review process and requires climate change to be considered when are being evaluated.

Chris Barrington-Leigh, an assistant professor at McGill University’s School of Environment and Institute for Health and Social Policy, agreed with the need for Canada to fund Alberta, but only if the goal is to wean it off fossil fuels.

“This is the time for all of Canada to pour money into Alberta,” he said. “It is not Alberta’s fault that the world is fossil fuel-based and that made Alberta wealthy.”

“In going through a big transition or changing direction, there’s an awful lot of coordination of beliefs that has to go on in the economy, and that requires leadership,” he said.

The appointment of former foreign minister Chrystia Freeland as deputy prime minister and minister for domestic affairs was also seen as a serious attempt to improve provincial-federal relations.

With files from Sean Craig and Sarah Lawrynuik.

Canada's National Observer will continue seeking comments and reactions over the next week from environmental groups across Canada regarding the new cabinet and climate action. Stay tuned. We will report back to you.

Some suggest that we require collective, international (war measures)action effort if we expect to reduce carbon emissions. There is the hoped for cure, ITER which could produce fusion power such as produced by our sun…Sadly, Canada is not a member(https://www.iter.org/proj/inafewlines) ,35 other nations are ITER members!

We dithered for years ,pre- WW2 while Hitler built his war machinery .Again we dither but we talk a lot…as we head to another Climate gabfest in Milan, soon !

For WW2 Canada created 28 new war related crown corporations to meet the war needs ….conscription , food and gasoline rationing, war savings bonds, etc. .
Our present climate war has been going on for years yet we see little direct international climate defensive action ,just talk.
As the population increases, (approaching 8 billion) our activities impact our environment(not rocket science!)…which can tolerate only so much ‘messy about’ !!
Fortunately the UN did its job when it complied the IPCC, science based, reports about the atmosphere’s inability to absorb the ever increasing amount of carbon dioxide . Recall when acid rains and refrigerant CFC created an imbalance in the atmosphere ? These problems were corrected when world leaders agreed to change to less damaging procedures. Why now ,are scientists studies and IPCC all but ignored by those that most need to take corrective action ?
Canadian taxpayers have contributed much to the study of potential technology that could lead to some progress in shortening the Climate War, before we lose !! see …https://www.nrcan.gc.ca/our-natural-resources/energy-sources-distributio...
So, come on Canada LEAD the beginning of the correction that so many look for.. Don’t be shy Minister Wilkinson …collect like-minded countries and help get the show on the road, ala WW2.You take ‘direct action’ Mr. Minister by staying home and watch Milan meeting on TV, instead of again sending a plane load of Canadians to this Milan Climate conference…and save burning thousands of gallons of jet fuel !