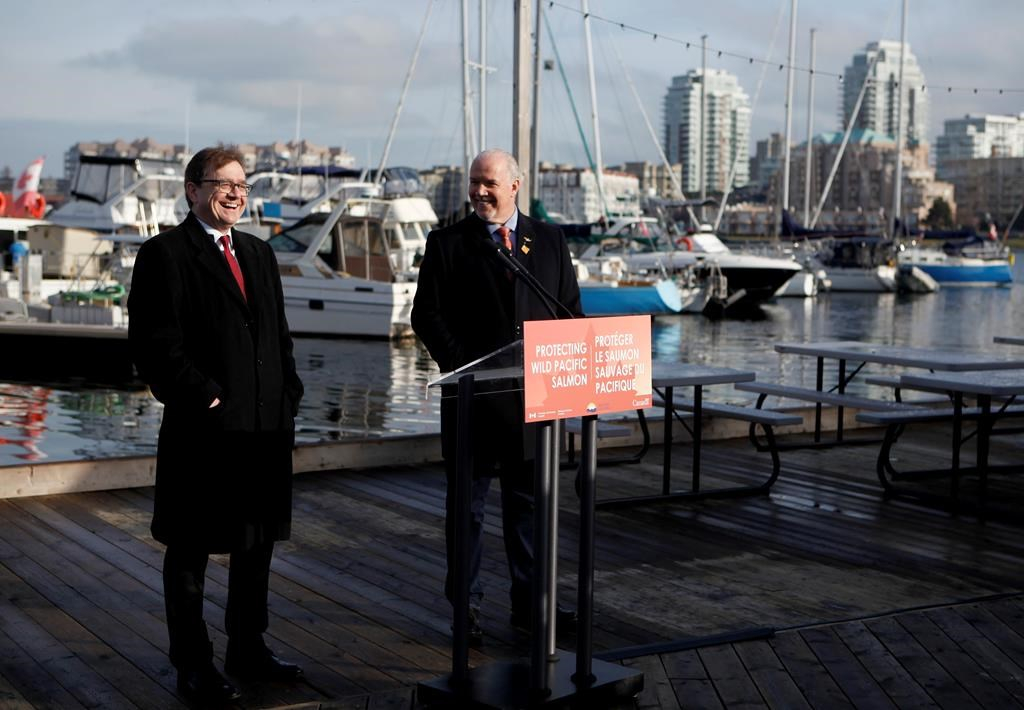 Premier John Horgan and federal Minister of Fisheries Jonathan Wilkinson make an announcement about the Salmon Restoration and Innovation Fund during a press conference at Fisherman's Wharf in Victoria, B.C., on Mar. 15, 2019. Photo by The Canadian Press
Previous story
Next story

The federal and British Columbia governments are preparing to cast a net to find new ways of protecting wild salmon habitat and restoring stocks.

The B.C. Salmon Restoration and Innovation Fund will be open to conservation, Indigenous and research groups to focus on projects aimed at protecting and restoring wild salmon stocks.

Wilkinson said working together with the province, First Nations, conservation groups, scientists, and the recreational and commercial fishing industries on biodiversity improvements and innovation initiatives can protect and enhance wild salmon stocks.

"Our goal is to manage Pacific salmon stocks in a way that conserves and rebuilds those populations to protect biodiversity while concurrently enabling fishing opportunities for First Nations, commercial and recreational harvesters," he said. "We all have a responsibility to ensure resources are managed sustainably and protected wisely."

Wilkinson and Horgan made the announcement at Fisherman's Wharf in Victoria, surrounded by fishing boats, float homes and passing passenger ferries.

Wilkinson said the fund is seeking proposals that focus on innovation, infrastructure or science projects that support the protection and restoration of stocks and examine products or technologies to support sustainable fishing.

Horgan said all levels of government and industry, Indigenous, conservation and community groups must work together to improve the survival rates of wild salmon, which face threats due to declining numbers and climate change.

"When it comes to our wild salmon stocks there is no better indicator of the challenges we face than rising water temperatures, low snow pack, rivers that aren't full with enough water to sustain our salmon, and that's where we need to intervene," he said.

"The salmon don't know boundaries," said Horgan. "The orca don't know boundaries. They don't know jurisdictions, one order of government over another. All they know is that humans have been interfering in their life cycles and it's time for humans to get in the game and make a better choice and better decisions and help the salmon survive."

On the impact of the proposed Trans Mountain pipeline expansion project on wild salmon and orca populations, Wilkinson said the federal cabinet has yet to makes its decision on proceeding with it, but strict salmon protection measures are in place along the proposed route.