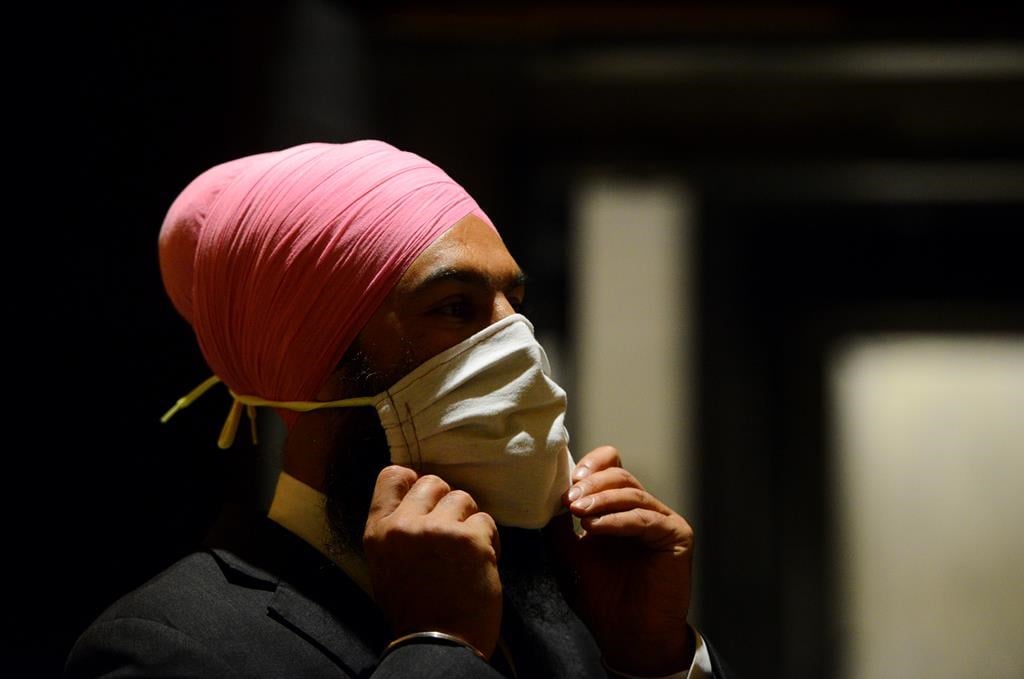 NDP leader Jagmeet Singh arrives to hold a press conference on Parliament Hill amid the COVID-19 pandemic in Ottawa on Monday, May 25, 2020. Photo by The Canadian Press/Sean Kilpatrick
Previous story
Next story

The Liberals, Conservatives, New Democrats and the Greens have all applied for the program, which sees the government cover up to 75 per cent of a worker's salary, to a maximum of $847 a week per employee.

The program is meant for companies that have suffered major losses of revenue as a result of the pandemic, though it also covers non-profits and charities.

Trudeau didn't answer repeated questions about why his party needed to access that support, speaking only broadly about the aim of the program.

"We know families across the country depend on the jobs that they do to pay groceries, pay for the rent. That's why we put in place a wage subsidy that is available to small businesses, large business, non-profits and charities to be able to support people who might otherwise be laid off," he said.

"This is going to be an important part of the economy bouncing back."

To be eligible, a company or organization must have seen its revenues from January and February decline by 15 per cent in March or 30 per cent in April and May.

The donations were down from the last non-election year, and all three have said they've dropped further since the COVID-19 pandemic began shutting down the country in mid- to late March.

At the same times, costs continue to be incurred.

"It was a simple decision when we saw loss of revenue at the party level and workers potentially being laid off, losing their jobs and having to go onto other programs like the CERB," he said of his party's choice to apply for the program.

"This is exactly what the wage subsidy is for, to ensure that workers remain connected to their jobs and we believe that's important."

Singh said the NDP will be topping up their staff salaries so their paycheques remain unchanged.

The Conservatives have said they applied as well to account for the higher costs incurred by the switch to off-site work.

The party also has a leadership contest under way.

Three out of the four contenders — Leslyn Lewis, Peter MacKay and Erin O'Toole — have spoken out against the decision by the party to apply for the subsidy program.

O'Toole has said if he wins, the party won't take the subsidy and will over time repay the amount collected.

Currently, the subsidy runs out on Aug. 29. The vote for Conservative leadership ends on Aug. 21, with the winner expected to be announced a few days later.

Bloc Quebecois Leader Yves-Francois Blanchet, whose party did not apply, called the decision to do so, by the Liberals and Conservatives in particular, unacceptable.

The programs were designed to help people facing bankruptcy, he said.

"This is funding the next campaign for the Liberals and the Conservatives," he said.

I have no idea how much the

I have no idea how much the public purse already subsidizes political parties through allowances to sitting members of parliament or lefiglators. No doubt that information is publicly available if one is willing to hunt for it. then of course there are tue various constitutency offices, and party administrations which may not be/probably aren't paid from the public purse. With donations slumping under epic rates of economic distress the question then becomes: are the jobs likely to be lost without subsidies to political parties, any more essential than jobs being lost in the productive/service sectors like agriculture and food processing/distribution? like building trades? like social services?. Seems to me we can survive for a while without political operatives, better than we can survive without plumbers, or dental technicians or hair cutters, or home health care aides? There is much more to recovery of the economy than jobs - there is the much thornier issue of what priorities are we going to address?

I think it is absolutely

I think it is absolutely disgusting that political parties and politicians can access this program. No wonder it passed so easily. The taxpayers of Canada will ultimately pay for this. No government can give away money they don’t have or don’t expect to have. Guess who the government relies on? Us, the general taxpayer, we are too poor to afford and access tax shelters. Remember the old axiom..nothing is free.