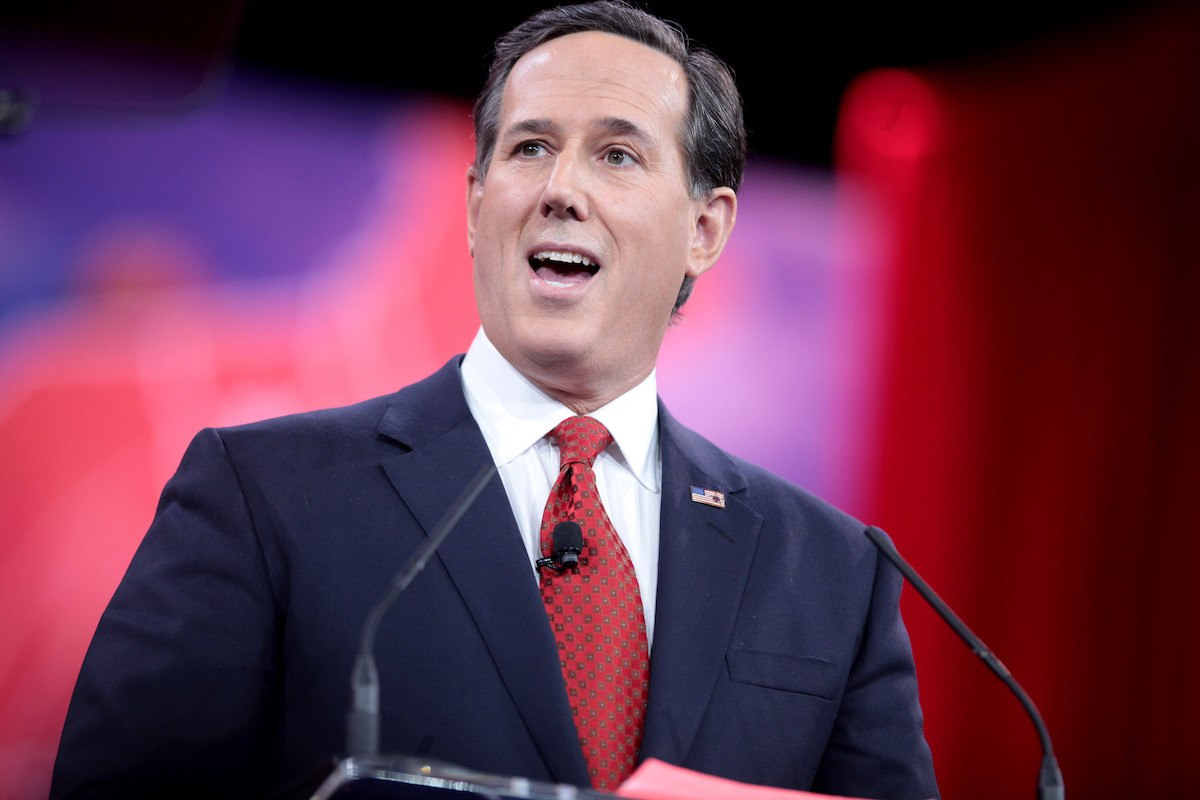 Last month, at an event hosted by the Young America’s Foundation, a non-profit for conservative youth, CNN contributor and former Pennsylvania senator Rick Santorum was riffing on the origins of the United States when a thought appeared to cross his mind.

“We came here and created a blank slate. We birthed a nation from nothing. I mean, there was nothing here,” speechified Santorum, when the idea intruded upon his brain. “I mean, yes we have Native Americans, but candidly, there isn't much Native American culture in American culture. It was born of the people who came here pursuing religious liberty to practise their faith, to live as they ought to live and have the freedom to do so.”

Santorum’s triumphalist mythologizing and offhanded disparagement came with a familiar sting for First Peoples. When Media Matters for America republished a clip of Santorum’s comments last week, Indian Country was quick to react.

“To correct the record, what European colonizers found in the Americas were thousands of complex, sophisticated, and sovereign Tribal Nations, each with millennia of distinct cultural, spiritual and technological development,” wrote National Congress of American Indians president Fawn Sharp. “Imagine the history of the United States without the economic contributions of cotton and tobacco alone. It's inconceivable.” The Native American Journalists Association, of which I am a member, was equally cutting, calling on CNN to fire Santorum.

Amidst the Twitter-fed uproar, it was easy to overlook the most unsettling thing about the former Pennsylvania senator’s comments. It’s not that Santorum’s narrative of a white Christian democracy birthed on “virgin” soil is out of step with dominant narratives, it’s that his retelling, which elides the bloody and calculated deeds that wrenched this continent from First Nations and to this day erases the unique contributions Indigenous peoples have made to humanity, remains commonplace. But no matter where you survey the historical record, Santorum’s view is obviously wrong. Just consider Pittsburgh, where the CNN contributor’s political career began.

Anglo settlement of what is now the Steel City began with the erection of Fort Pitt, designed to ward off French attacks and Indigenous resistance, at the confluence of the Monongahela and Allegheny rivers. In 1763, amidst an Indigenous religious revival, an alliance of Odawa, Ojibwe, Potawotami, Huron, Miami, Wea, Kickapoo, Mascouten, Piankashaw, Lenape, Wyandot, Cayuga and Seneca rose up against the British. At Fort Pitt, the Lenape, Seneca and Cayuga attacked the British stronghold on three sides, laying siege to soldiers and settlers for weeks. To repel the offensive, the British turned to biological warfare, gifting Turtleheart, a Lenape leader, and other Indigenous negotiators with two blankets and a handkerchief infected with smallpox. In a letter to one of his colonels, British Gen. Jeffery Amherst endorsed this underhanded tactic as well as “every other method that can serve to extirpate this execrable race.”

While it’s unclear how many Natives were infected with the variola — a disease that causes vomiting, fever, pus-filled blisters and even blindness — the British did succeed at holding off the Natives. Later that fall, King George III issued the Royal Proclamation of 1763, forbidding settlement west of the Appalachian Mountains. The decree offended the interests of colonists and land speculators, including a Virginian named George Washington, and played an important role in the lead-up to the American Revolution. The line the proclamation drew down the Appalachians was further clarified through treaties with two especially powerful Indigenous polities — the Haudenosaunee Confederacy and the Cherokee Nation — who would leave an enduring mark on United States, North American and global history.

But that’s not the end of the story — far from it. During the U.S. War of Independence, the nascent Congress dispatched commissioners to Fort Pitt to negotiate a treaty between the newly independent colonies and the Lenape — the United States’ first with Native nations. As in every other treaty Americans would forge with tribes, the Americans promised a lot — even suggesting, according to historical accounts, that the Lenape and other tribes could be admitted to the union as a state — but in actuality, delivered little.

The treaty, like many others, was lubricated with alcohol and brokered through deceit. The Lenape likely believed the treaty did little more than formalize their neutrality in the war. The United States, meanwhile, wrote the agreement in such a way that it not only guaranteed safe passage for the Continental Army and militia through Lenape country, but also assured the tribe’s allegiance against the British in the war. A year after the signing, Killbuck, a Lenape negotiator, read the articles of the agreement and said they were “wrote down false.” Continental Army Col. George Morgan agreed. “There never was a conference with the Indians so improperly or villainously conducted,” he remarked.

If @CNN thinks Rick Santorum’s views are worth elevating, then it’s long past time for it to have at least one Native person regularly on air, writes columnist @jnoisecat.

If anything, this sort of anti-Indian treachery became more commonplace under American rule. In a particularly grisly event further down the Ohio Valley at Gnadenhütten, present-day Ohio, in 1782, a 160-man-strong militia rounded up an unarmed group of friendly Christian Lenape as they harvested corn. Pointing to the Lenape’s possession of pewter bowls, teakettles and branded horses as proof the Natives had participated in raids against the whites, rather than as evidence of their assimilation, the militia held a vote on the Indians’ fate. A large majority agreed they should be executed, though the militiamen disagreed on the method: burning or scalping.

Eventually the dispute was settled with a vote and the Lenape were told to prepare themselves, with Christians prayers, for death. They were sorted into two slaughterhouses: one for men and another for women and children. Ninety-six Natives were killed. Two boys survived, one who was scalped and left for dead and another who managed to slip into the cellar beneath one of the houses, hiding as the blood streamed and pooled. In a new book, Surviving Genocide, Oregon University historian Jeffrey Ostler describes the Gnadenhütten massacre and the sweep of history from independence through Indian Removal in the 1830s and beyond as an era of ethnic cleansing and, indeed, genocide.

And yet, despite the butchery of their “New World” Lebensraum, the Americans, like the British before them, would have to reckon with enduring Indigenous presence and power.

In the north, the Haudenosaunee Confederacy, comprised of six nations — the Seneca, Cayuga, Onondaga, Oneida, Mohawk and Tuscarora — whose homelands stretched from the St. Lawrence River in what is now Quebec to present-day Pennsylvania, were among the strongest. But they were admired by Europeans, including some of the Founding Fathers, like Benjamin Franklin, for more than their military might. The Haudenosaunee possess one of the oldest continuously running representative parliamentary systems in the world — second only to the Icelandic Althing. Their confederacy was likely forged in the 12th century, perhaps in 1142, according to some oral and astronomical evidence, with a constitution called the Great Law of Peace, which united five nations in a system premised on harmony, checks on centralized power and the consent of the governed. (The Tuscarora later joined this confederacy, sometime around 1720.)

It was a remarkably free and egalitarian structure, governed by 50 clan chiefs who made decisions through consensus. All leaders were male, but they were chosen and easily replaced by the women of their clan. Early suffragists like Elizabeth Cady Stanton and Matilda Joslyn Gage, who settled in the Haudenosaunee’s historic homelands, said they were inspired by this part of the Great Law.

Under the confederacy, each tribe and citizen was granted a remarkable degree of autonomy, expressing “such absolute notions of liberty,” according to scientist and colonial administrator Cadwallader Colden, “that they allow no kind of superiority of one over another, and banish all servitude from their territories.” Some historians have even suggested this form of government influenced the United States constitution. While the evidence for this is limited, it is hard not to conclude that, in 1776, the average Haudenosaunee — and certainly the average Haudenosaunee woman — enjoyed a degree of freedom much greater than the average American.

Elsewhere, other Native peoples also influenced the United States in fundamental ways. One need not look further than the legal profession. In the 1823 case Johnson v. M’Intosh, for example, which Santorum would have read in the property law class required for all first-year law students, the Supreme Court ruled that only the federal government, and not private individuals, could purchase lands from tribes. The case played a foundational role in defining the powers specifically held by the federal government as well as the origins of property rights in the American legal system.

Later, in the 1832 case Worcester v. Georgia, the Cherokee Nation won a ruling that recognized the sovereignty of tribal nations, albeit in a limited form. Over 500 tribes, and indeed every resident of this country, has been touched by these legal structures and precedents: property rights, federal power and self-determination. It’s just that, unlike most Americans, Native Americans don’t have the privilege to forget that.

You see, it’s impossible to understand the United States’ landmass, its property system, its federal government, its corruption, its violence, its obsession with guns and its conception of freedom without Indigenous Peoples. And yet there are so many Rick Santorums who opine on the nature of a nation built on land, life, liberty and so much else taken, borrowed or otherwise lifted from Native people without even the basic acknowledgment of our presence, our contributions and our losses.

I’m not sure CNN should can Santorum, as many of my Native colleagues, would like. I’m worried that might just turn him into the latest martyr of the “cancel culture” wars. Santorum hasn’t won an election since Sen. Bob Casey beat him by 18 points in 2006, and it’s probably unwise to unintentionally elevate the voice of a man who encounters his own thoughts so clumsily at a time when the conservative movement is losing its grip on reality.

That came out as a touch

That came out as a touch awkward, in the sense that most of Julian's readers can hardly imagine a more appropriate appointment than Julian.

Julian may be appropriate but

Julian may be appropriate but he is far from unique. In recent years many indigenous scholars (and some "whites" claiming to be indigenous) have been reviving the knowledge and the history of the original humans inhabiting the "New World" It is typical of Santorum to once again claim, as a long dead Pope once did, that the New World was "Terra Nullius" - unpeopled and free for the taking. Only the most ignorant of our citizens still believe this crazed notion. The New World was richly populated, by millions of souls by some accounts and in less than 300 years European interlopers managed, largely through imported diseases, to erase 90% of the pre existing population. Slowly, painfully, brutally, Europeans buried the original peoples, civilizations and cultures. Trying their very best to cancel all these complex and fascinating cultures. They actually succeeded pretty well. for a time. Somehow, it seems, despite these best, ongoing, efforts, Indigenous peoples have remained and there is a very good chance that as the European systems of Capitalism and distorted politics implode under the pressure of climate catastrophe, it will be the adaptable, resilient Indigenous peoples who will survive. If CNN survives, no doubt most of its commentators will be of Indigenous ancestry.