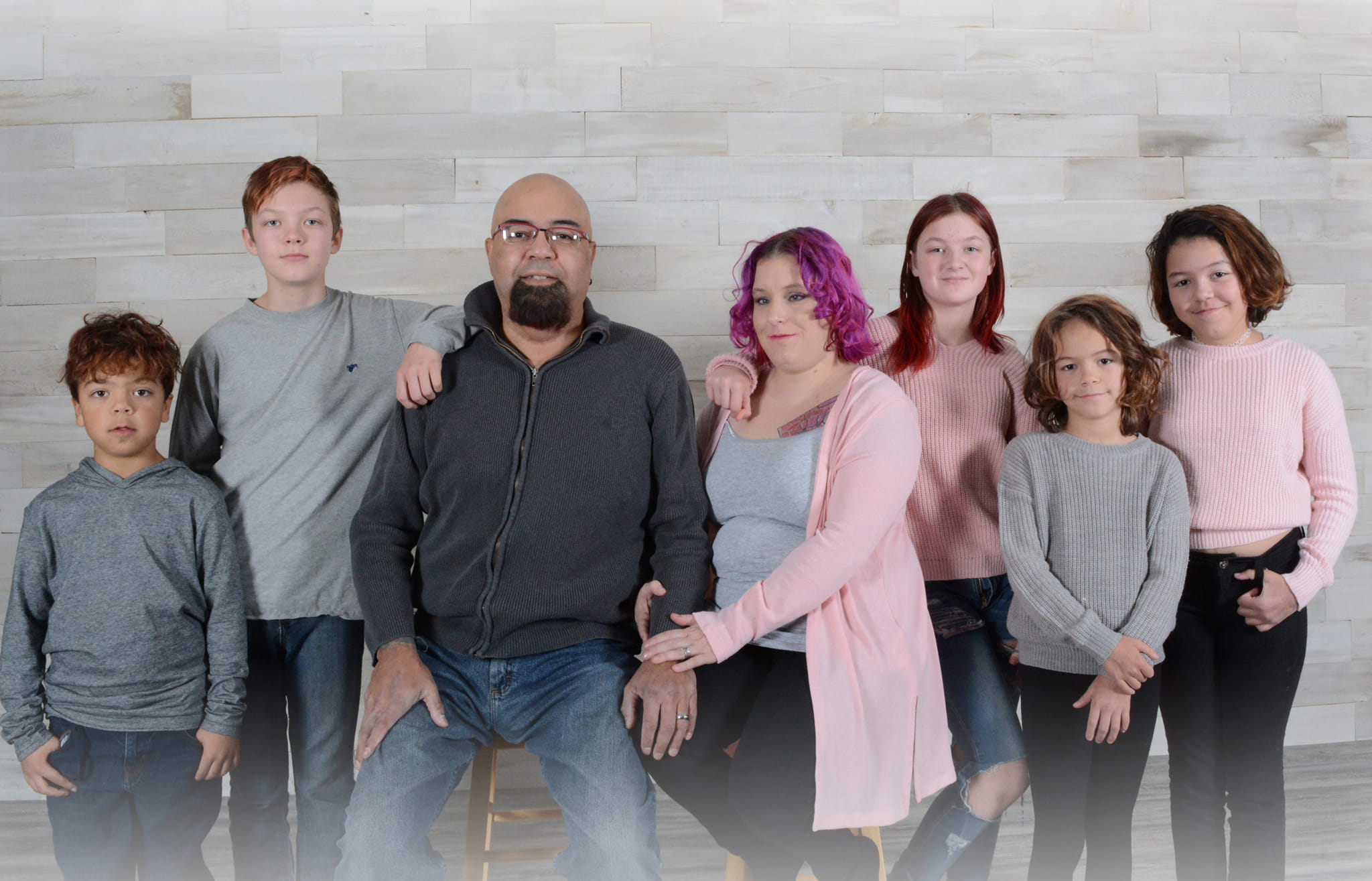 ​​​​​​​Nick Benjamin with his wife and their five children. Even with a good salary, Benjamin is struggling to feed his family. Photo supplied by the Benjamin family
Previous story
Next story

Roughly one in 10 households nationwide is food-insecure. Among those most at risk are renters, persons with disabilities, Indigenous people, and families with young children.

Nick Benjamin and his family are among them.

The Manitoban lives with his wife and five children. Though he makes a good salary, it falls short when they have seven mouths to feed and his wife is ineligible for disability assistance due to his income.

The Benjamin family also feels the strain of inflation.

"I’m not sure we’ll have food at the end of the month because prices go up each time we shop," he says.

This year, Canada’s inflation reached a 30-year high, with food prices making their biggest jump in more than a decade.

Several staples, including beef, chicken, dairy and milk, are impacted. It’s estimated the average Canadian family will spend an extra $966 on food in 2022.

It does not help that transportation, gas and housing costs are also rising, meaning less money for groceries.

While food banks can relieve some pressure, they only offer so much: even after a visit to the local food bank, Benjamin has nothing more than the minimum to feed his family at lunch and dinner.

"There’s no snacking, and it hurts because the kids are growing and need those," he says

Low-income families are tired of what they consider fluff: the cycle of debates, consultations, studies, reports and unfulfilled promises — none of which fill stomachs, writes Spencer van Vloten @BcDisability. #poverty #cdnpoli #EndDisabilityPoverty

Without fresh groceries for another week, the race is on to see if their supply lasts until the next trip to the store.

The worry is overwhelming the Benjamin family. 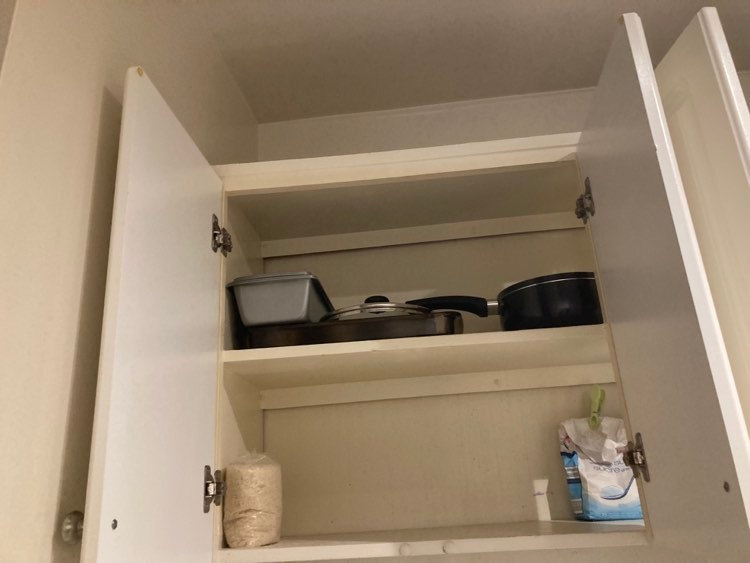 She opens the fridge door and grabs her meal for the night: a small pack of yogurt.

Leaving two other packs in the fridge — her breakfast, lunch and dinner over the next few days — she takes a seat.

The yogurt has expired and exudes a familiar sour stench. A cup of starchy macaroni completes her meal.

After just a few spoonfuls, she is finished and her empty stomach growls indignantly.

"I am starving," she replies with a shrug.

This is what life is like for Tycholaz and thousands of low-income Canadians.

To see why, just do the math.

Your money is nearly gone from rent alone, and to avoid freezing or living in the dark like a cave dweller, you have other bills to pay, too.

With what remains, all you can afford to eat are a few items off the grocery store bargain shelf.

And even those are drifting out of range as costs rise.

"With the inflation on everything, it is getting to be too much. Some days I go with nothing at all, says Tycholaz.

Ken Birkin knows all about the struggles faced by Brandi Tycholaz and the Benjamin family.

The 62-year-old from North Vancouver, who operates a small business making balloons, has a monthly shopping budget of $60.

With that, he can afford just one meal a day — sometimes a plate of shredded lettuce, other times a bowl of ramen.

Instead of looking ahead to outings with family, his life is about surviving day-to-day, meal-to-meal, cheque-to-cheque.

But those cheque amounts are staying the same while costs rise. He's feeling the impact.

Birkin has endured bone infection, diabetes and mental health pressures. He struggles to walk, even after losing 125 pounds. He is stressed and frustrated.

"They have thrown me into the dumpster," he says.

Care is the word

Birkin's story sums up what food insecurity does to a person.

Canadians living in food-insecure households are vulnerable to chronic conditions like diabetes, heart disease, hypertension and arthritis. They die earlier than their better-fed counterparts.

Food insecurity also contributes to depression, anxiety and suicidal ideation, all of which increase relative to the level of food insecurity experienced.

Why is this happening all over Canada?

Recent inflation is part of the explanation, but at the root is the ongoing failure to effectively address poverty.

While many poverty-reduction proposals are made, few of the most notable ones are implemented.

Federally, there has been much discussion of a guaranteed basic income, and the Liberal Party of Canada voted in favour of such a policy at its 2021 party convention.

The federal government also promoted the introduction of a Canada Disability Benefit, an income supplement available to everyone on disability assistance.

But little of this has come to fruition, and Birkin, Tycholaz and Benjamin are tired of what they consider fluff: the cycle of debates, consultations, studies, reports and unfulfilled promises — none of which fill stomachs.

What they want is action: implement policies that recognize Canadians need more help as costs soar.

Measures at the start of the pandemic — such as federal supplements for families and provincial boosts for persons on social assistance — helped achieve this, and accordingly, food insecurity dropped during fall 2020.

It was a game-changer for Tycholaz, who received an extra $300 a month from the B.C. government.

“It was wonderful. We really needed it.”

It also showed that governments could act quickly when they wanted to, but these measures were short-lived, while poverty lives on.

Canadians like Tycholaz, Birkin and Benjamin continue to go hungry, and the gap between the costs of living and the means they have to live on is widening.

As Tycholaz spoons at her empty yogurt pack and reflects on the situation, she notes that one critical element is missing: care.

"Politicians can start by showing me they care, but right now, they aren’t doing that. Maybe they need to live in our shoes until they know what it’s like to go hungry."

Spencer van Vloten is a community advocate and nationally published writer from Vancouver. He edits the community news websites BCDisability.com and YouandMeBC.ca, and has been awarded the British Columbia Medal of Good Citizenship and the City of Vancouver Award of Excellence.

The upsides of high oil and food prices

As I read article upon

As I read article upon article of inflation, poverty, family food shortage, I think of of 2 things, the second which no news outlet seems to adequately address.
So first when I was 10 years old in 1957, my dad explained what elections were about, but one comment he made has stuck with me 65 years. " son, Canada is the richest country in the world yet the people we elect have not figured out how to feed and house the kess fortunate. This is wrong" . Has anything changed?
Second. 40 years ago Reaganomics and Thatcherism grabbed our politicians, government became the enemy, free markets were touted as the economic God and would save us all.
Hah! What a joke. For 40 years neoliberalism has grown despite its failures in all aspects of our society. Housing, food, wages, services! Yet this ambiguous theory, is still touted as our saviour. Even a pandemic has failed to motivate our press or our politicians as to the real problems. The market and unrestrained capitalism doesn't work. Capitalism is our system. Great, but we can't continue to lower taxes within our democracy and survive. Populist movements come from injustice and unfairness. The old saying states, the rich get richer and the poor get poorer. Never has that been more true, than now. When will our politicians realize you can't eliminate the middle class and have a democracy survive. The goals of neoliberalism are to have an elite ruling class, then the rest of us. We are fast approaching this. Inequality has taken over the USA, and is growing in Canada. More Inequality means more poverty, more homelessness, more hunger, and much more populism. A downward spirial

I completely agree with your

I completely agree with your analysis, but wonder? Why do so many of us not connect the dots but instead keep voting for the same old parties that have ruled Canada since its inception?? And why by now don't more of us see what you so clearly articulate, and demand better?

We are a two trillion a year economy.......why do we let our ruling classes get away with offering paltry sums to address climate change.......less than they are willing to send in guns to keep a foreign war going......and we continue to act as if there's no money for feeding and housing our own people......but lots of cash to keep a moribund world order puttering along?