There’s not an obvious connection between the crazy castles in Ottawa and the steel mills of Hamilton, but perhaps we should be making the link more forcefully.

Thanks to excellent work by reporters like Justin Ling and others, we know the “freedom convoys” are not expressions of organic populism and we have a disturbingly sharp picture of the far-right hate groups that instigated and organized the mayhem.

But populist backlash doesn’t require true malevolence to catch fire, especially if the instigators hold the megaphones of elected leadership. The dangers of angry populism are also looming for climate action. Conservative leaders like Jason Kenney and Pierre Poilievre are already stoking public fears about inflation and cost-of-living, trying to direct genuine anxiety into backlash against scapegoats like carbon pricing and other climate initiatives.

In an atmosphere of rising economic anxiety, that scapegoating can be potent. So, it’s ever more important to inoculate climate action by showing, with tangible action, that people will not be left behind. That an energy transition will be a “just transition.”

We usually think of just transition for people working directly in coal or the oil and gas industry. Canada is extraordinarily lucky to have a generation of forward-thinking labour leaders who have worked with government to make important progress with communities and workers in the coal industry. But the federal Liberals have been much too slow to deliver on their promise of a “Just Transition Act” for oil and gas workers — it’s safe to say premiers like Kenney and Scott Moe are not likely to be proactive with surging oil revenues and help their provinces’ workers prepare for the future.

But the importance of just transition extends far beyond the oilpatch. Many thousands of Canadians have livelihoods tied to high-carbon industries. To update Upton Sinclair’s famous aphorism, no matter how broadly climate concern penetrates public consciousness in the abstract, it will always be difficult to get someone to support something when their salary depends on them rejecting it.

Which brings us back to the steel mills of Hamilton.

This week, we saw tangible action from a surprising source: the Ford government announced $500 million to convert ArcelorMittal Dofasco to green steel. Dofasco’s coal-fired blast furnaces are the single-largest industrial source of CO2 in the province and will be converted to electric. Ontario’s cash will be matched by $400 million from Ottawa.

"Car-makers are investing billions and billions of dollars searching for ways to reduce carbon emissions along their supply chain," Doug Ford told the CBC. "Well, I have news for all of them. That search starts and ends right here in Hamilton with Dofasco Steel."

Climate activists aren’t often enthused about subsidies to big polluting industries but this project is just the kind of inoculation we need, demonstrating a future for nearly 5,000 direct employees and a vision for the region while catalyzing serious industrial decarbonization.

Steel, like cement, is one of those products that is mind-bogglingly ubiquitous. Steel girds our built civilization just as concrete pours its foundations. They are heavy carbon polluters because both industries pack a double-whammy: furnaces with intense heat and, in addition, a chemical process that releases carbon dioxide.

With big industrial projects, you’ve always got to question whether the companies are really lining things up on a pathway to zero carbon or throwing money down a road that’s ultimately a dead-end.

Chris Bataille is one of Canada’s leading experts on deep decarbonization and specializes in steel. He assures us the Ontario project is “exactly the direction we need to be going with steel.”

“The trick is we need to stop using coal-driven blast furnaces and move to electric arc furnaces fed by more recycled scrap, and clean primary iron reduced using hydrogen instead of coal. This sets us on that long-term path.”

Credit where it’s due, but Ford’s sudden enthusiasm for green steel shows just how bizarre and muddled an energy transition is going to be. His government has spent its term in office tearing up climate policies, putting stickers on gas pumps and tearing down renewable energy projects.

In fact, Ford’s last election campaign was quite literally the case study for “Economic populism and carbon pricing.” The University of Purdue’s Leigh Raymond concluded, “Ontario’s experience constitutes a warning about … the power of populist attacks focusing on energy prices for ‘working families.’”

As the impacts of climate change become more and more obvious, and the public becomes more and more convinced a transition off fossil fuels is inevitable, populists like Ford are shifting tactics and playing all sides: sometimes acknowledging the threat and supporting projects, but also picking fights with key climate measures and broadly engaging in predatory delay.

The challenge is to force them to tell a more complete story in this era of economic anxiety. That the cost of acting is dwarfed by the price of inaction. That security for your family and livelihood depends on a comprehensive embrace of climate action.

There are 204 medium to large renewable energy projects across the country already in operation or coming online with Indigenous participation.

And community-scale projects are also booming, according to Indigenous Clean Energy’s new report Waves of Change. It estimates between 1,700 and 2,100 such projects are “now in place.”

“Nearly half of these installations are in Ontario, driven in large part by feed-in-tariff measures that offer Indigenous communities a pathway for clean energy participation.”

Both Coastal GasLink and the Trans Mountain expansion pipelines are going way over budget. TC Energy revealed this week that CGL would go “significantly” over budget, but declined to put forward a new estimate.

And who knows what the Trans Mountain expansion will eventually cost? The estimates keep soaring: from an initial $5.4 billion, the estimates rose to $7.4 billion, later to $9.6 billion. By 2020, the price tag was $12.6 billion. On Friday, the company pegged it at $21.4 billion.

You’ll recall, the feds bought the TMX pipeline project on our behalf for $4.5 billion. That’s just the purchase price — the ever-rising construction estimates land on top.

Deputy PM Chrystia Freeland sounded spooked by the new estimate: "I want to assure Canadians there will be no additional public funding for Trans Mountain," she told reporters.

CEO Ian Anderson also announced he would be retiring effective April 1. In the announcement, Anderson defended the project, saying: "The progress we have made over the past two years is remarkable when you consider the unforeseen challenges we have faced, including the global pandemic, wildfires and flooding."

Going into retirement, he still doesn’t grasp the irony.

Over 100 people (the count is still rising) died as floodwaters surged through the mountain town of Petropolis, near Rio de Janeiro, Brazil. A month’s worth of rain fell in three hours.

The horrible reality of the climate crisis! This is so heartbreaking https://t.co/PUiudNCTWP

There was a lot of news this week about banks and the financing of climate breakdown.

Canada’s biggest bank is poised for a boisterous annual meeting when shareholders vote on a climate resolution. Bloomberg reports:

“The resolution was prompted in part by RBC’s role in helping pipeline company Enbridge Inc. issue a sustainability-linked loan and sustainability-linked bond last year, said Matt Price, Investors for Paris Compliance’s director of corporate engagement for the finance sector. At the time, Enbridge was building a new section of its Line 3 oilsands pipeline, a project that would, by some estimates, add as much CO₂ to the atmosphere each year as Argentina. It was also vehemently opposed by Indigenous peoples in Minnesota who feared the desecration of their lands and waters.”

In related news, RBC was singled out for its continued financing of coal. The German group Urgewald updated its “Coal Exit List” and found financial institutions had pumped $1.5 trillion into coal between 2019 and 2021. Canadian banks were responsible for $127 billion — RBC led the Canadian pack with $83 billion in bonds and shares, $14 billion in financing and loans.

Canada’s Export Credit Agency needs to clean up its act

“The top reason for EDC's dismal rating is that it continues to invest in the domestic oil and gas industry despite a flurry of recent government announcements promising Canada would phase out public financing of fossil fuels … From 2018 to 2020, EDC provided US$11 billion annually on average to the oil and gas sector.”

“Canada’s four main fossil fuel-producing provinces shelled out $4 billion in subsidies for the industry from April 2020 to the end of last year,” writes Natasha Bulowski, covering a new report from the International Institute for Sustainable Development.

Two whistleblowers filed complaints with the U.S. Securities and Exchange Commission alleging Facebook misled investors about its program to combat misinformation about climate change and covid.

"Complaint alleges climate change misinformation was prominently available on Facebook and that the company lacked a clear policy on the issue as recently as last year, despite executives’ committing to fight the “global crisis” during earnings calls." https://t.co/4JxwURd1uJ

Not the most uplifting roundup this week, so let me leave you with some news from Taiwan where battery-swap stations are about to outnumber gas stations. Not all EVs have four wheels, in fact most don’t. There are now about 430,000 (!) e-scooters registered in Taiwan. 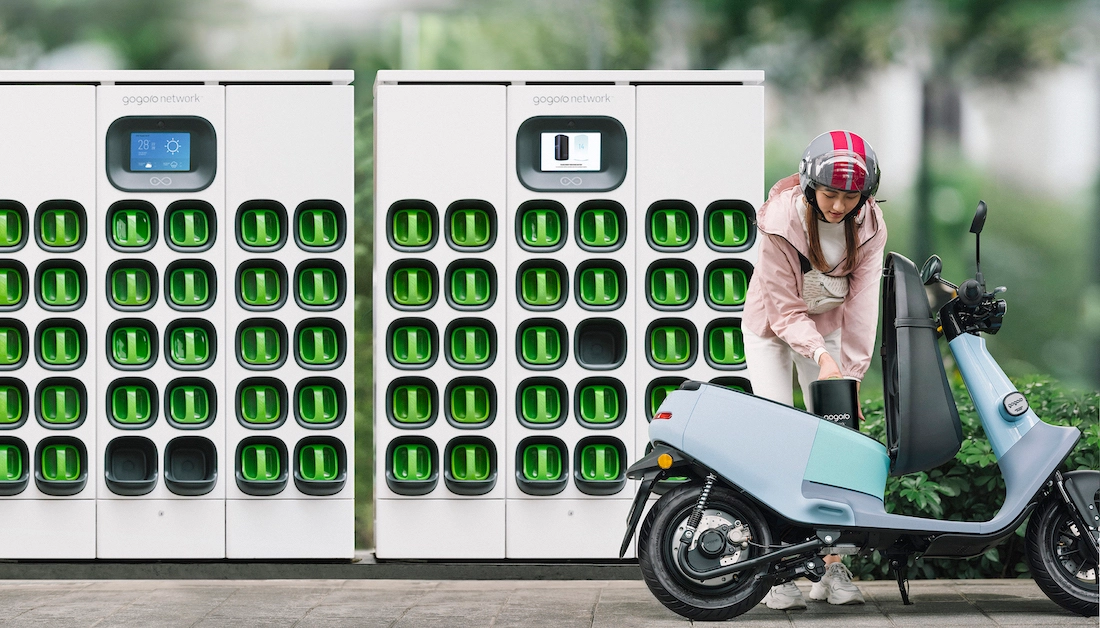 The company that’s dominated the Taiwanese scene — Gogoro — has now entered the Chinese and Indian markets where motorcycles and scooters make up the majority of vehicles on city roads.

Financial Post: Trans Mountain expansion is running over budget by billions of dollars and months behind schedule

Taiwan Today: Taiwan zips toward a green future with e-scooters