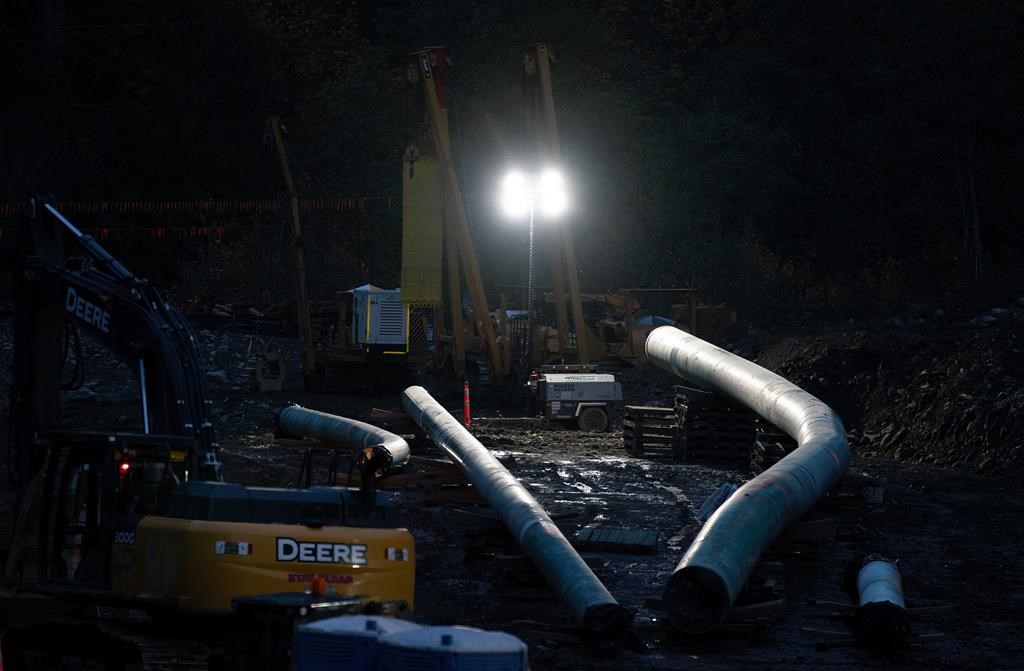 CALGARY — The federal government said Friday it will not put more money toward the Trans Mountain pipeline expansion in spite of a newly disclosed price tag for the project that comes in 70 per cent higher than expected.

"I want to assure Canadians there will be no additional public funding for TMC," Freeland told reporters in Ottawa, adding the government has engaged BMO Capital Markets and TD Securities to provide financial advice on the project and has been assured by both parties that the project remains commercially viable.

Freeland's comments came shortly after Trans Mountain Corporation announced the projected cost of the pipeline expansion has soared from its earlier estimate of $12.6 billion to $21.4 billion.

The company blamed the cost increases on the COVID-19 pandemic and the effects of the November 2021 flooding in British Columbia, as well as project enhancements, route changes to avoid culturally and environmentally sensitive areas, and scheduling pressures related to permitting processes and construction challenges in difficult terrain.

The company has also pushed back the projected completion date of the project to the third quarter of 2023. The pipeline expansion was originally expected to be complete sometime this year.

The existing Trans Mountain pipeline carries 300,000 barrels of oil per day, and is Canada's only pipeline system transporting oil from Alberta to the West Coast.

It was bought by the federal government for $4.5 billion in 2018, after previous owner Kinder Morgan Canada Inc. threatened to scrap the pipeline's planned expansion project in the face of environmentalist opposition.

On Friday, Freeland said the federal government still believes the Trans Mountain expansion is a "serious and necessary project."

"This project is in the national interest and will make Canada and the Canadian economy more sovereign and more resilient," she said.

The federal government has said all along that it does not intend to be the long-term owner of the project, a position restated by Freeland Friday. She said the government will launch a divestment process later this year.

A number of Indigenous-led initiatives have already come forward saying they will seek an equity stake in the project.

“Ian led a project that continues to progress while setting new standards for major pipeline project execution, including unprecedented levels of involvement from Indigenous Peoples and communities," board chair William Downe said in a news release.

"On behalf of the board, we wish Ian only good things as he leaves us."

This report by The Canadian Press was first published Feb. 18, 2022.

As police pour into Ottawa, residents steel themselves for final showdown between cops and protesters

Free emissions are a bad

Free emissions are a bad thing of our ignorant past like: drunk driving; smoking inside; and letting people who think the planet is disposable boss us around.

Assessing the risks of Kinder

"An oil spill would put at risk industries that together employ over 200,000 people locally including tourism, film and TV, real estate, high tech, agriculture and coastal industries.

***
In 15 years of operations, Kinder Morgan has accrued a significant number of spills, largely the result of human error. This includes four along the Trans Mountain route since 2005.

In the case of a major spill, taxpayers would likely be responsible for the burden of costs, as a company’s liability is limited to $1.3 billion and a major spill could easily cost ten times this amount."