Canadians escaped the worst of this summer’s climate impacts, touch wood, but alarm bells are ringing around the world.

South of the border, CNN’s meteorologist opened the Labour Day forecast declaring, “America is burning up.” California, in particular, has been roasting. Heat records are falling like birds from the sky throughout central and southern California and, by the time you read this, a rare hurricane will have brought fierce winds up the coast from its landfall in Mexico.

Homeless people are desperate for somewhere to rest that doesn’t feel like lying on a frying pan. Lakes and rivers have shrivelled to record lows. The state was urging Californians to do everything possible to keep enough juice on the grid to run air conditioners, ironically even pleading with drivers to limit charging their electric cars.

The parched western U.S. has been described as being in the grips of a “megadrought” — the worst in at least 1,200 years, but that may be a mischaracterization, implying a situation that will eventually pass. “This isn’t a drought,” scientist Brad Udall told Colorado’s Vail Daily. “Myself and other scientists are trying to use a different term: Aridification.”

Meanwhile, the Sahara continued its aridifying advance into southern Europe, launching a fiery assault first on Portugal and Spain and then more broadly. Europe sweltered through its hottest summer on record, causing thousands of deaths and crippling food production. Average temperatures from June to August were almost half a degree Celsius above the previous hottest summer, which was … wait for it … the summer of 2021.

Shrivelling lakes and waterways revealed sunken ships, unexploded bombs from the Second World War, Roman ruins and ghost villages. But most ominous are the “hunger stones” engraved with warnings to future generations. When the markings are visible, famine and hard times lie ahead. One stone was first carved in the Middle Ages and re-engraved in 1616 with the words: “If you see me, weep.” 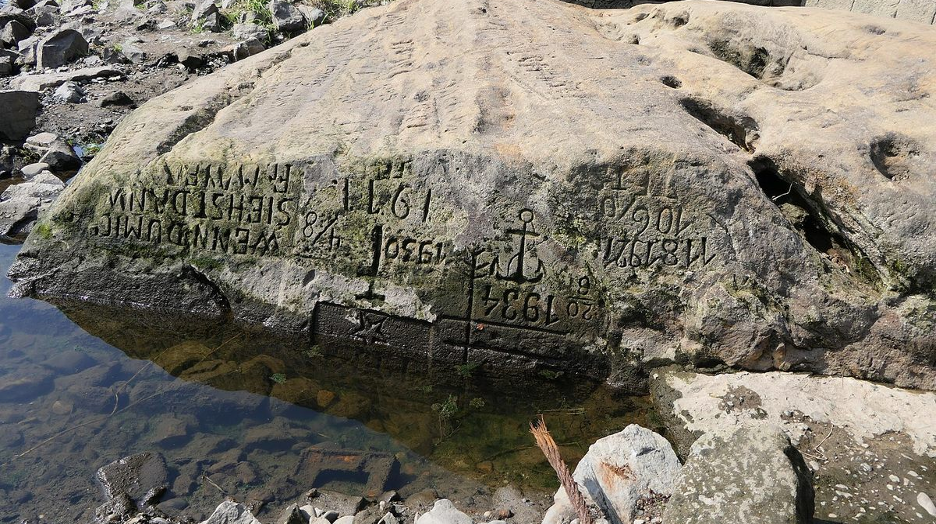 The record-breaking heat across Europe will be an “average” summer by 2035, according to a study by the U.K.’s Met Office. That finding holds even if the world’s governments all cut their climate pollution as much as promised. The U.K.’s Climate Crisis Advisory Group called the finding “an urgent reminder of the need for countries to go well beyond their (pledges) under the Paris Agreement.”

You probably heard about climate impacts in the U.S. and Europe, but there has been much too little coverage of the long (very, very long) heat wave in China. Southern China, in particular, has been suffering through what is possibly the most vicious heat wave in human history — extreme heat and drought lasting more than two months, from mid-June through the end of August.

China’s biggest lake shrunk to just one-quarter of its usual size and several regions launched “weather modification” operations, firing missiles armed with silver iodide into the sky in an attempt to “seed” clouds and cause rain.

The summer’s most devastating impacts have hit Pakistan, where tens of millions of people have been displaced, well over 600,000 in relief camps. Over 1,300 are already known dead, at least a third of them children, killed by torrential monsoon rains that submerged a third of the country.

The devastation is almost unfathomable and still being tabulated: 1.7 million homes, 246 bridges, 6,500 kilometres of roads. More than 800,000 hectares of swamped farmland. The numbers start to blur, but here’s one that may stick with you — in the next month, 73,000 pregnant women are expected to give birth without health-care support.

“It is just like a sea,” said Pakistan’s prime minister. “Water everywhere as far as you could see.” And more rain is forecast in the coming weeks.

The UN secretary-general didn’t mince his words: “There is a lot of attention on the war in Ukraine. But people tend to forget there is another war — the war we are waging on nature, and nature is striking back, and climate change is supercharging the destruction of our planet.”

“Today it is Pakistan. Tomorrow it can be anywhere else. To deal with climate change, that is the defining issue of our time and a business-as-usual approach is pure suicide.”

The emergency in Pakistan is the brutal injustice of climate change on stark display. Pakistan is responsible for a negligible amount of the greenhouse gases accumulating in our atmosphere but ranks in the top 10 on the Climate Risk Index — Pakistan is already suffering temperatures beyond the “wet-bulb” level for human survival and is home to more glaciers than anywhere in the world outside the polar regions, all of them melting rapidly and exacerbating the floods.

Canada, should you need reminding, ranks in the Top 10 for overall responsibility and first or second on a per capita basis. The biggest historic emitters are the U.S., China and Europe.

Pakistan’s climate change minister, Sherry Rehman, has been full-throated about these “historic injustices,” excoriating wealthy countries and companies causing the fossil-fuelled crisis. “I wince when I hear people say these are natural disasters. This is very much the age of the Anthropocene: these are man-made disasters.”

She placed the blame squarely on large fossil fuel countries and companies. “You can’t walk away from the reality that big corporations that have net profits bigger than the GDP of many countries need to take responsibility.” she told The Guardian.

As it happens, Pakistan currently chairs the G77 group of developing countries whose proposals for loss and damage financing were quashed by the U.S. and Europe at last year’s UN climate negotiations. We can expect to hear much more from Rehman and her colleagues in the runup to this year’s Conference of the Parties scheduled for November in Egypt.

One of Queen Elizabeth’s remarkably few indiscretions came just ahead of last year’s UN climate talks in Scotland. She was caught channelling her inner Greta on a hot mic, venting frustration at “irritating” politicians who “talk, but they don’t do.”

This five-alarm summer certainly shows they aren’t doing nearly enough, but the late Queen wasn’t entirely correct. Let’s leaven the litany of climate disasters with a look at some of the things they did “do” this summer.

California passed a law banning the sale of gasoline-powered cars after 2035. The governor of the world’s car culture capital called it “one of the most significant steps to the elimination of the tailpipe as we know it.”

“Our kids are going to act like it’s a rotary phone,” Gov. Gavin Newsom told the New York Times. California is the largest auto market in the U.S. and transportation is the country’s biggest source of climate pollution. More than a dozen states model their emissions standards on California.

By 2026, 35 per cent of passenger vehicles will have to emit zero greenhouse gas emissions and 68 per cent by 2030. Canada has a similar 2035 “target” but only B.C. and Quebec have actually put rules in place.

The Chinese province of Hainan went five better, banning new fossil-fuel vehicle sales by 2030. The government made the announcement about “New Energy Vehicles,” as they’re called in China, as part of its carbon-peak implementation plan. China is already the world leader in terms of EV sales and Hainan will include not just cars, but delivery vans and urban sanitation as well as rental and ride-hailing vehicles.

The United States finally passed a national climate law and it’s a big one: $370 billion in spending and tax credits as well as pollution pricing on methane. Several sober energy analysts estimate the legislation will cut emissions 40 per cent by the end of this decade.

The name of the legislation is very interesting in its own right: after decades of failing to pass any real national climate legislation, lawmakers oriented themselves against fossilflation and called it the “U.S. Inflation Reduction Act.”

The world’s biggest offshore wind farm went live. Hornsea 2 was commissioned by the U.K. government and built by Ørsted in the North Sea. Each turbine blade is 81 metres long and one single revolution can power an average U.K. home for a day.

Ørsted is itself a fascinating story — the company used to be called DONG Energy, short for Danish Oil and Natural Gas. It has transformed itself into a fully renewable energy company, the best example yet of a fossil fuel company completing an authentic energy transition.

France banned fossil fuel ads. Advertisements for natural gas will be banned from the beginning of next year and other companies, like supermarkets, won’t be able to run ads for cheap gas.

Everything’s bigger in Texas, now including geothermal. The Whisper Valley community outside Austin sits on top of the biggest geothermal grid ever built to heat and cool homes. Bore holes were drilled on every lot and piped together into a network capable of serving 7,500 homes, which are all equipped with solar panels. “We essentially have no power bills at this point,” one resident told CNBC.

☀️👷 “For the first time ever, clean energy jobs outnumber those involved in producing, transporting, and burning fossil fuels,” according to a new @IEA report.

All Nunatsiavut towns now have solar power. The region’s Inuit government is working to get its remote communities off diesel power. It began installing solar panels in 2018 and got solar on all Nunatsiavut community centres over the summer.

I’ll leave you with a thoughtful piece by David Coletto and Trevor Melanson: 'Climate action equals smaller energy bills' is the message every Canadian needs to hear. If you’re concerned that politics is fully consumed by the cost of groceries and gas, or perhaps intrigued that the U.S. got climate action framed as inflation reduction, this is one for you.

Summarizing a summer of research, David and Trevor write: “In our current inflation crisis, it’s more important than ever that Canadians see a light at the end of the tunnel — and that climate action will take them there.”

Thank you for reading Zero Carbon. Please forward it along and always feel free to write with feedback or suggestions at [email protected]