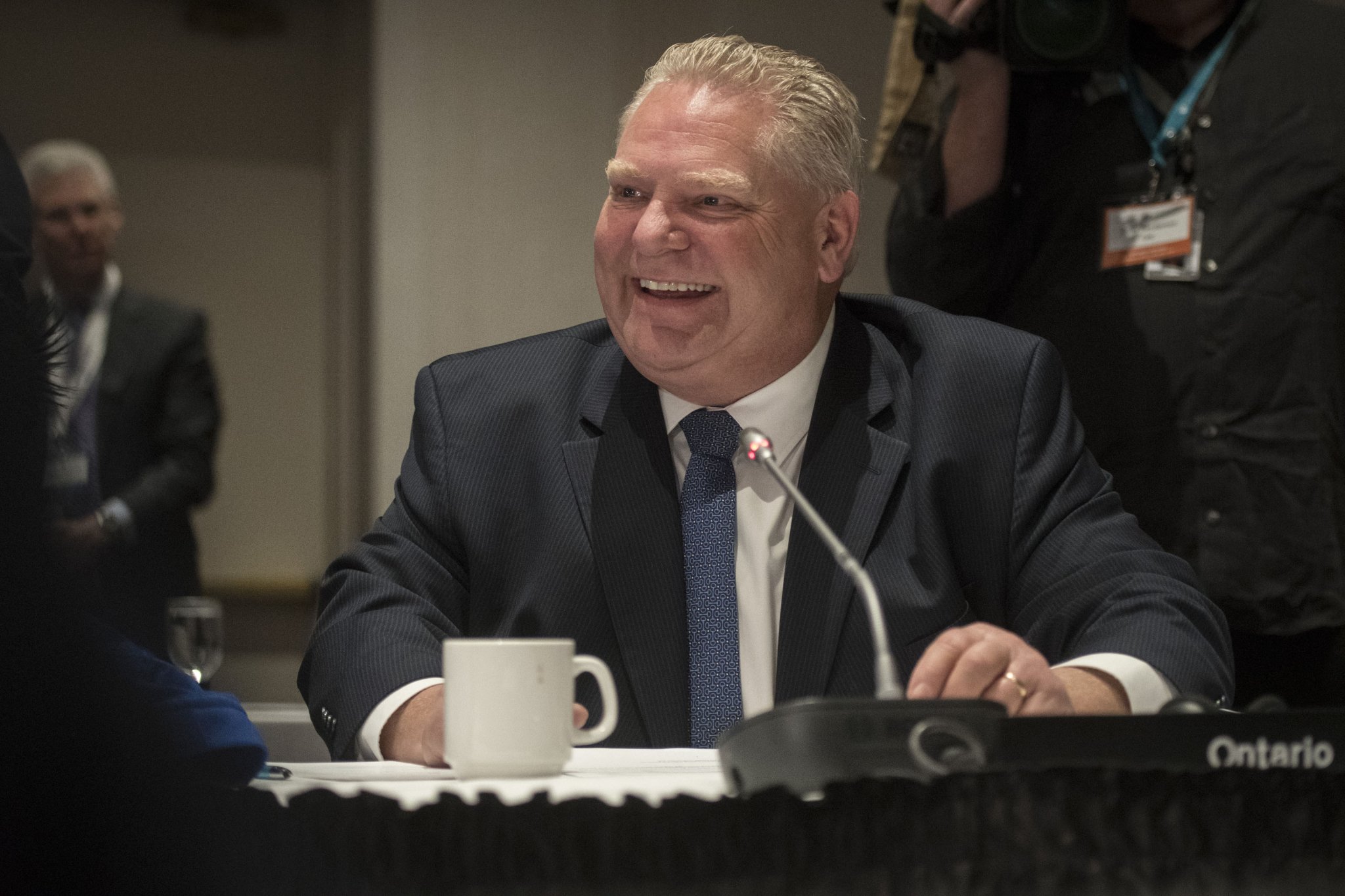 There are perhaps no two forces more anxiety-inducing than the existential threat of climate change and the very personal threat of rising living costs.

But how do climate action and affordability overlap with each other?

This was an area of research we wished to better understand: the intersection of our greatest long-term threat and our most salient near-term one. Do people believe climate action would make life more affordable for them, or do they assume it would be yet another hefty bill atop a seemingly ever-growing stack?

While research shows climate action actually lowers energy bills, it was clear that people’s perceptions might not align with reality — and that these perceptions could heavily impact the next few years of political discourse. Especially as the Conservative Party of Canada’s leadership front-runner (whose fate will be confirmed on Sept. 10) sharpens his “axe the carbon tax” talking points.

Accordingly, Clean Energy Canada and Abacus Data conducted a series of Ontario-based surveys and focus groups this summer, given the political importance of Canada’s biggest swing province along with our desire to understand how recent regional EV investments were resonating with residents. What we found was that while almost everyone we surveyed saw climate action as broadly beneficial, many felt climate efforts were likely to cost them more over the short term — even if such efforts might save them money in the long run.

While participants strongly supported climate action regardless of this cost, it was clear that if our current climate efforts had an Achilles heel, a belief that it might cost people more in the short term was it — regardless of whether that was true.

It would be hard to overstate just how critical affordability concerns are right now to people. Last year, 90 per cent of Canadians ranked a pocketbook issue as a top concern likely to impact their vote in the 2021 election, while a deeper analysis revealed economic anxiety cuts across the political spectrum.

That said, a number of arguments did resonate strongly with those we engaged in this research, encouraging them to see climate action as beneficial to their cost of living.

Electric vehicles were widely understood as cheaper to fuel than gas cars, and participants viewed EV rebates (federal and provincial) along with government investments in charging infrastructure as effective ways to improve affordability.

This was consistent with a poll of 1,500 Ontarians we did in May, which found 63 per cent of Ontarians believe EVs are cheaper than gas cars when one considers the full cost of ownership, like fuel and maintenance.

They’re not wrong. Clean Energy Canada analyzed a number of popular electric and gas car models earlier this year and compared ownership costs over eight years. With just one exception, the electric version of every car looked at was cheaper — usually significantly so.

Another highly persuasive argument for participants was around energy security. While oil and gas prices are driven by factors outside our control — geopolitics and the manoeuvring of countries like Russia and Saudi Arabia — clean electricity is produced and priced in Canada.

These arguments were not only effective but grounded in reality.

Meanwhile, the International Energy Agency expects average household energy bills in advanced economies to decline between 2020 and 2050 — with even steeper declines if governments achieve their net-zero ambitions by 2050.

Modelling from the Canadian Climate Institute similarly found that Canadians will spend a smaller percentage of their incomes on energy en route to net-zero.

These trends aren’t hard to explain: even if you’re spending more on electricity, a lack of fossil-fuel costs and improvements in energy efficiency add up to net savings.

Nearly everyone we spoke to knew EV manufacturing was a major economic opportunity for Ontario. This wasn’t particularly surprising, considering Ford, General Motors and Stellantis have all made recent investments to manufacture EVs or EV batteries in the province — with plenty of political photo-ops, to boot.

But while Canadians now generally understand the link between economic growth and climate action, climate-ambitious governments would be wise to better communicate the cost-of-living benefits of their climate efforts while, at the same time, ensuring greater access to these long-term cost-saving solutions today.

And that includes Ontario Premier Doug Ford. The province has made big investments to manufacture EVs, while Ford now has his eye on a 100 per cent clean electricity grid. The premier has always expressed concern over Ontarians’ cost of living. He now has a critical opportunity to merge his oldest message with his government’s new, more climate-friendly vision.

In our current inflation crisis, it’s more important than ever that Canadians see a light at the end of the tunnel — and that climate action will take them there.

Those who paint climate action as an expensive luxury are out of step with reality, and yet, there remains a real gap between evidence and perception.

The climate reason is clear. The economic argument is strong. With a compelling cost-of-living case on its side, climate action will be that much more durable in the face of politicians who still wish to “axe the carbon tax.”

Trevor Melanson is the communications director of Clean Energy Canada, and David Coletto is the CEO of Abacus Data.

this is a fluff piece by

this is a fluff piece by clearly uninformed or deliberately biased journalists. DOIG FORD HAS HIS EYE ON ONE HUNDRED PERCENT CLEAN ENERGY. really?
he cancelled all green projects and bought three gas plants that will use fracked LNG.
He plans to run new gas lines to places rather than hydro transmission,
no rebates on anything green ,
killed improved insulation and construction code changes.
anything here look remotely like Renewable future focussed to you?

The main cause of our recent

The main cause of our recent inflation is fossil fuels. From personal transportation, transportation of our consumer goods then generating our electricity. Dropping FF prices direct relation to slightly less inflation. Plus , hydro electricity is constant price. No worries about what your invoice will read next month. Once we get heat pumps installed Canada wide, heating will be less expensive. But the big bonus is jobs and growth. Not good for the planet, but good for economic growth.

Not sure wheres it is that

Not sure wheres it is that electricity is a constant price. Here we have not only time-of-use billing, but frequent increases at all times, and for all levels of usage. On top of that, the "customer charges" keep on increasing.

Thanks! In my understanding,

Thanks! In my understanding, this resonates strongly what is predicted in England and with the Australian experience.

This article relies on the

This article relies on the reader not following the hyperlinks referenced within because after following a few, it is clear they are of poor quality (secondary and tertiary - i.e. 2nd hand, 3rd hand - source referencing) or do not support the allusions drawn in the article (such as Doug Ford's, uh, "desire" for 100% renewables).
I don't know from where SFU/Wosk Centre obtains funds which support Clean Energy Canada, but, in my opinion derived from its output to-date that I have read, (e.g. National Observer op-eds; Facebook ads; mailing list) it deals more in Fairy Dust than hard solutions and the SFU/Wosk Centre reputations are not enhanced by this program.

Where in the world did these

Where in the world did these authors get the idea that Doug Ford has “a more climate-friendly vision” and has his eye on 100% clean energy grid”? They provide no evidence for this assertion and in fact the evidence is quite to the contrary —- from his Govt’s pushing for extension of natural gas lines throughout rural Ontario and support for gas powered energy plants, and its regular usage of special Ministerial Zoning Orders to over-rule local land use regulations AND the public’s right to consultation, giving developers literally a free hand to pave over wet lands and formerly protected green spaces and similarly giving a free hand to the gravel extraction and open pit mining industry … to his commitment to building a completely needless mega- highway 413 which will destroy countless acres of green space, agricultural lands, intrude into our protected Green Belts, & promote environmentally destructive urban sprawl —- and on and on. This is why nine brave young Ontarians, supported by top environmental organizations such as ECOJUSTICE, are suing Ford’s Govt for destructive climate policies and actions that are violating their/our rights under Canada’s Charter of Rights and Freedoms —- to security of person and, thus, they are arguing, to a liveable environment . And this land mark case is now at the level of Ontario’s Superior Court —— although the Ford Govt has tried unsuccessfully to have it thrown out of court.
So while I generally agree with the article Re. the message that “Climate action equals smaller energy bills”, I am amazed by its faulty and misleading portrayal of Doug Ford.

All this denigrating of the

All this denigrating of the article and its authors is quite unjustified. Trevor Melanson is editor of the Clean Energy Review and does a pretty good job of bringing various clean energy related news to one's attention. David Coletto is CEO of Abacus Data which does good work in public opinion research.
The research this article alludes to was presented in a 1-hour webinar on October 20. It offers smart advice that every climate activist should heed:
https://www.youtube.com/watch?v=YBzniW70kz8&t=27s
Premier Ford's remark about 100% clean energy is what he said during the Leaders' Debate last May (see the link in the article for the CNO report on that). Of course it's b.s., and surely he figures that nuclear is 100% clean energy, but it's what he said and he might as well be reminded of it for the rest of his term.