Only the storytellers can explain us now

This week’s news read like the opening chapter of a Tom Clancy novel — three near-simultaneous explosions blew up not just one but two Russian gas pipelines running under the Baltic Sea to Germany.

Danish fighter jets scrambled to the scene, capturing extraordinary video of the roiling ocean as methane spewed into the atmosphere from a cauldron almost a kilometre-wide.

Political leaders declared it an obvious act of sabotage, only possible by a “state-actor.” Nord Stream’s steel pipes are over four centimetres thick, covered with another 10 centimetres of steel-reinforced concrete. Jack Ryan would be racing to Europe, if only this were fiction.

In one of many strange twists, neither Russian pipeline was actually in service — Germany refused to open Nord Stream 2 after Russia’s invasion of Ukraine, and Russia has been strangling gas deliveries through Nord Stream 1 to pressure European households as winter heating season approaches.

But the pipes are kept pressurized and hundreds of thousands of tonnes of the potent greenhouse gas will be vented into the sky, probably the single-biggest methane release ever (although dwarfed by ongoing emissions from the fossil fuel industry worldwide).

If they weren’t even operating, why blow them up? The point is surely the chaos itself, whether online or fear and discord IRL, through our elections, social movements and energy markets.

On Thursday, a fourth methane plume was discovered by the Swedes. So, both pipelines were attacked, each in two spots. All four sites are just beyond Denmark’s territorial waters. The other side of the line would have been an attack on a founding member of NATO.

The plot gets thicker. The Nord Stream pipelines exploded just as Norway and Poland inaugurated a new alternative to Russian gas pipelines, the Baltic Pipe project — its route notably crosses the Nord Stream lines — and just a couple of days after Norwegian drilling platforms went to high alert after suspicious, unidentified drones appeared and breached their security perimeters.

All uncomfortably reminiscent of Occupied, the Norwegian TV series that became an international hit on Netflix. Russia takes control of the country after a new Norwegian government is elected on a climate mandate and shuts down its North Sea oil and gas industry, replacing exports to Europe with zero-carbon energy.

Strangely enough, the land nearest the Nord Stream explosions is the Danish island of Bornholm. Regular readers will know it as one of the beacons in the geography of hope. Bornholm is already one of the world’s most advanced clean energy sites and Russia’s invasion of Ukraine has galvanized new German-Danish projects to build an “energy island” with gigawatt-scale floating wind farms for electricity and the production of green hydrogen.

Online conspiracy theorists are already alleging it was not Russia that sabotaged the Nord Stream pipelines but more likely the eco-zealots at the World Economic Forum, or the White House and European capitals, all part of the larger plot to take away freedom and enforce “climate lockdowns.”

The so-called pandemic was just a dry run in these corners of the internet. We’ll see the full power of the state come to bear under the pretence of fighting so-called climate change.

We should be paying more attention to climate fixation on the far-right, having seen how their crazy metastasizes, gets amplified by misinformation campaigns by “state actors” and results in occupations in Ottawa or in Washington, D.C. The “climate lockdown” theories have already leapt to Fox News, on shows like Tucker Carlson Tonight.

And Carlson was quick to direct suspicion about the Nord Stream sabotage onto U.S. President Joe Biden. After all, Biden’s press secretary did say that the energy crisis drives home the importance of accelerating towards a clean energy economy. Carlson was scathing:

“The people lecturing you about your SUV may have blown up a natural gas pipeline and created one of the great catastrophes of our time… We could wind up very quickly in Third World conditions.”

Surely, we might hope, climate conspiracies will ultimately get washed away by storms like hurricane Fiona or Ian. And public opinion is certainly turning in favour of more aggressive action as climate impacts become harder and harder to ignore. But the storytellers warn there is unlikely to be a clean pivot and instead a more muddled and violent process.

At the extreme, hurricanes like Ian are simply background in Canadian writer Omar El Akkad’s American War. In fact, Florida is all but gone beneath a rising ocean as America’s divisions are exploited. The country once again descends into civil war when southerners rally to defend the Texas oilfields after oil is outlawed. (Disturbingly, a poll this summer found 43 per cent of Americans thought a civil war was at least somewhat likely, over half of strong Republicans.)

El Akkad’s book is a masterful work and a haunting caution about the fires stoked by culture war propagandists and grievance mongers when they intersect with climate chaos and energy politics.

Fiona’s wreckage was forecast several years ago in Catherine Bush’s retelling of The Tempest, which she situates on Blaze Island (standing in for Fogo Island) off the coast of Newfoundland. A climate scientist is driven to build a remote, ruggedized home for himself and his daughter after a career spent under attack and ridicule.

It’s an entirely understandable reaction, underscored by the crazy in Parliament this week. While machinery began clearing splintered homes in Atlantic Canada, and Ian bore down on Florida, the new Conservative leader used his first opposition day trying to repeal carbon pricing on fossil fuels.

It’s striking how often attacks on climate policy and renewables are among the very first — Day One! — moves by politicians aiming to stoke resentment and grievance politics.

But Pierre Poilievre’s Conservatives managed to find a new low in the rhetoric that drives scientists batty. On Tuesday, Rosemarie Falk rose in the House of Commons to deliver her coup de grace against “quote unquote ‘carbon pricing.’”

If it works, “How come it didn’t prevent hurricane Fiona?” railed the MP from Battlefords-Lloydminster to applause and calls of “You tell ’em” from her colleagues.

It’s a short clip, well worth watching to see just how far the Conservatives have fallen from the days when Brian Mulroney used pollution pricing to clean up acid rain.

On carbon pricing: "What is it doing to prevent disasters?"

"How come it didn't prevent Hurricane Fiona? Where are those tax dollars going?"#cdnpoli

Prince Edward Island is particularly vulnerable to climate impacts and these striking satellite photos show how hurricane Fiona washed away the P.E.I. coastline in hours. 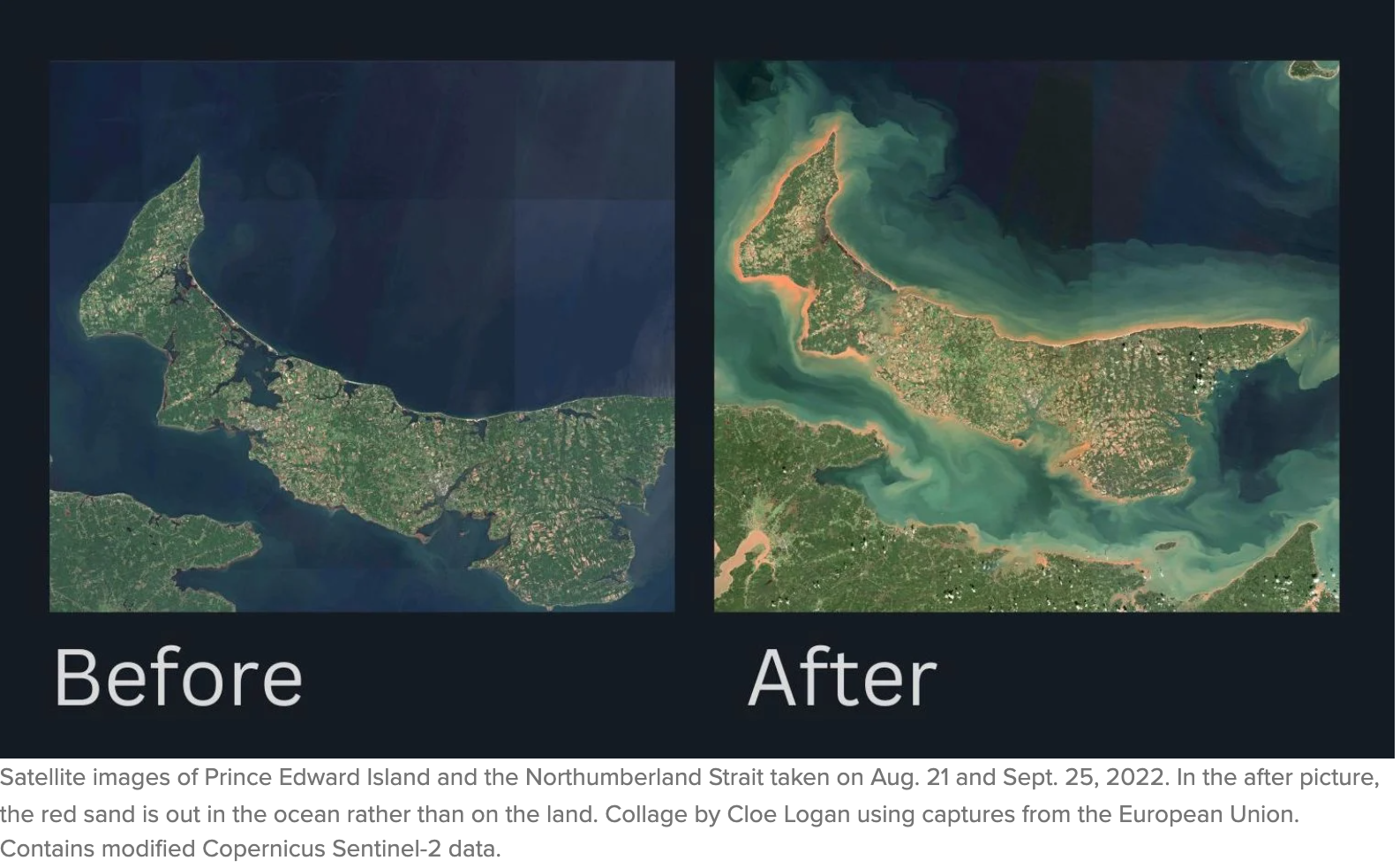 “I think at a certain point, we need to recognize that it's no longer a question of reaction. We need to work on prevention. We need to look at possibly a managed retreat in some areas,” Will Balser, the coastal adaptation co-ordinator at Ecology Action Centre, told Cloe Logan.

Canada can save billions by adapting faster

Every dollar spent on adaptation saves $13 to $15 later. That’s from a new report called Damage Control.

“Canadians will see lower incomes and a choice between higher taxes or fewer government services if there isn't more effort to adapt to the changing climate … the Canadian Climate Institute warns.”

Damage Control underscores the fact that climate action is much cheaper than climate change. In fact, by pushing 15-year-old arguments in Parliament, the Conservatives are letting the Liberal government off the hook, “sparing the Liberal government the burden of answering big questions about whether Canada is prepared for what's coming,” Aaron Wherry cogently argues.

Oilsands rolling in cash, not spending on promises

Canada’s big oilsands companies launched the Pathways Alliance over a year ago, promising to help Canada meet its 2030 and 2050 climate targets. They’ve got their advertising campaign up and running but, despite record profits, they haven’t made a single investment decision, according to analysis by the Pembina Institute. Instead, they’re sending dividends to shareholders. What are they waiting for?

Canada's oil companies won't do what they promise — instead, they bide their time, awaiting Poilievre, argues columnist Max Fawcett.

John Woodside reports on pushback against the “Fuelling Canada” campaign: “a group of doctors, nurses and public health advocates organized by the Canadian Association of Physicians for the Environment (CAPE) filed the complaint with the federal regulator against the Canadian Gas Association (CGA), accusing the organization of misleading the public about so-called natural gas.”

Pipelines under development — 2X the diameter of the Earth

The pipeline frenzy is “‘dramatically at odds” with climate goals.” Canada is more than holding its own at sixth place globally.

A BBC investigation in Iraq “found millions of tonnes of undeclared emissions from gas flaring at oil fields where BP, Eni, ExxonMobil, Chevron and Shell work.” It’s an enormous amount — equal to the GHG emissions from 4.4 million cars; if captured instead of flared, the gas from just one of the fields would power three million European homes. And the toxic impacts are staggering.

This was a key promise that countries made at COP26

Marjorie Taylor Greene, one of the loudest Republican members of Congress, took aim at Air Canada’s “absurd” order for electric-hybird planes, joking they’d be powered “like the slaves who were rowing in ships,” with passengers forced to spin pedals to keep them aloft. No wonder it was Air Canada, she said, that’s the country with “President Justin Trudeau.”

“This year, a quarter of all new cars purchased in China will be an all-electric vehicle or a plug-in hybrid. By some estimates, more than 300 Chinese companies are making EVs, ranging from discount offerings below $5,000 to high-end models that rival Tesla and German automakers. There are roughly four million charging units in the country, double the number from a year ago, with more coming,” reports The New York Times.

On this side of the Pacific, just four per cent of North American production is electric.

...and in America, that's still not many. At this rate, it will take years for supply to catch up with demand pic.twitter.com/LdMsVHXROr

India is seeing the light on renewables 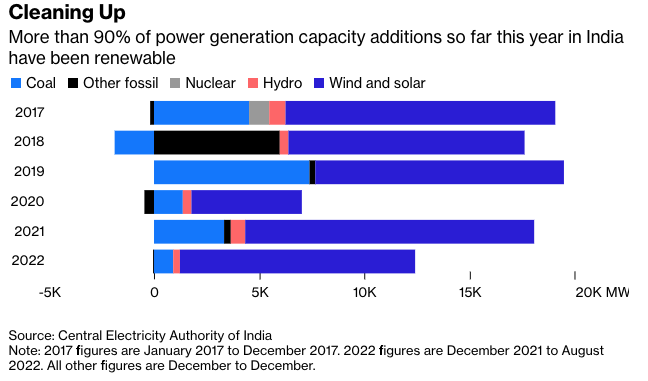 Electric school buses in the wild

It was a bit of a dark newsletter this week, so here’s a cleanse …

#electric school bus sighting this AM! @LionElectricCo rolling in #outaouais, #cleanenergy future is rolling in… pic.twitter.com/nY3CSBtfjh

I’ll leave you this week with a recommendation for more on the hard-right’s fixation with “climate lockdowns.” Justin Ling is really a must-follow, especially for a Canadian angle. (You can get The Climate Lockdown Hoedown free but you should consider subscribing to his newsletter, Bug-eyed and Shameless, if only to compensate for all the tortured hours tracking squalid online forums.) He maps out the climate conspiracy pathway — from tin-foil hats to mass-audience on Fox News.

“It is the byproduct of something I’ve taken to calling the Kooky Internet to Tucker Pipeline,” Justin writes.