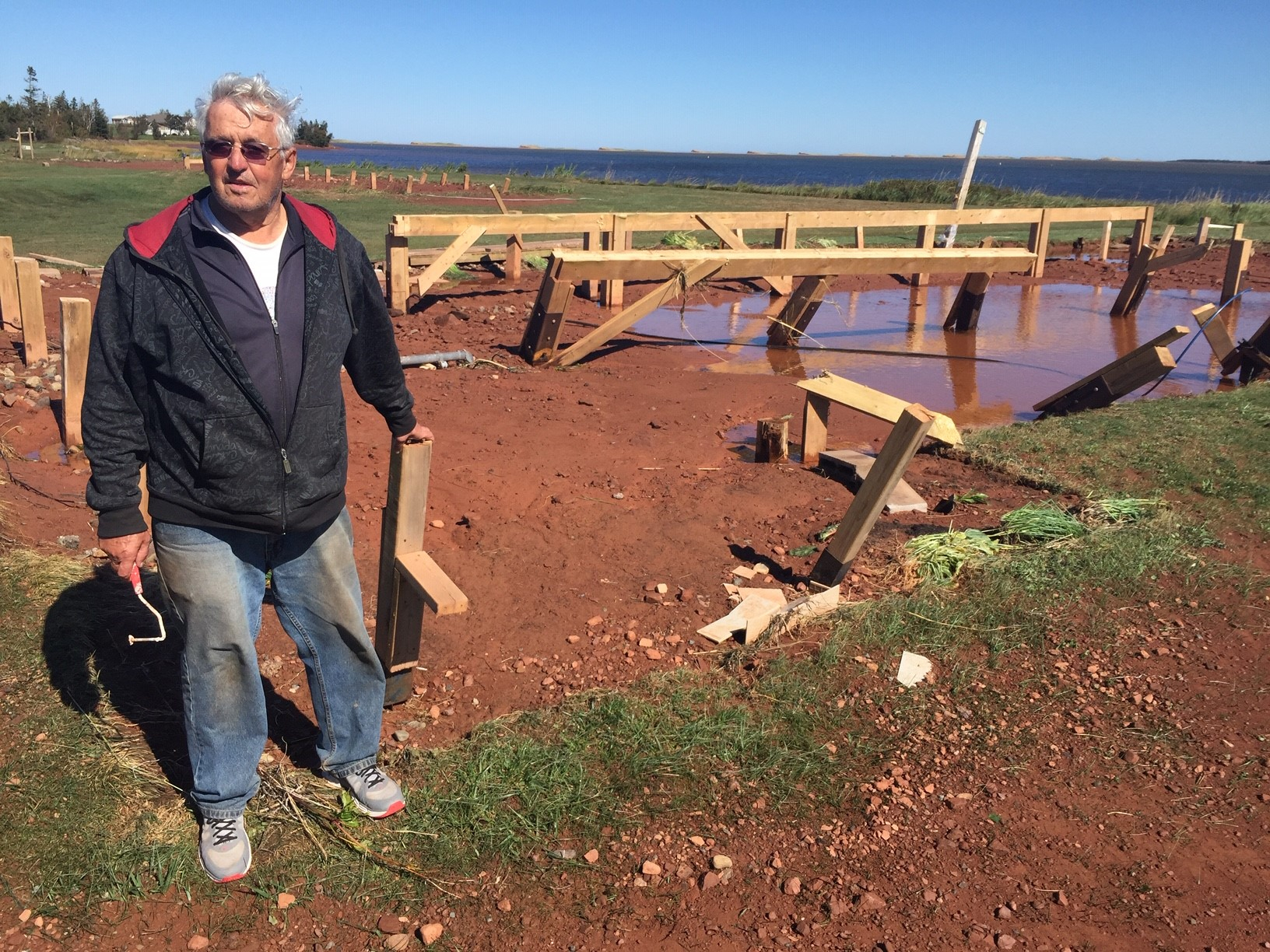 Rick Callaghan of Charlottetown stands next to all that is left of his cottage near French River, P.E.I., on Sept. 25, 2022. Photo by THE CANADIAN PRESS/Brian McInnis
Previous story

Hurricane Fiona sped up erosion that would have taken years to carve out Prince Edward Island's coast, washing away shorelines in the space of a few hours.

Satellite images taken by the European Union and posted by the Canadian Space Agency show a stark difference in the province’s iconic red sandy beaches before and after the storm.

“We're looking at possibly decades of recovery for some of these dunes, especially the dunes in P.E.I. and in parts of New Brunswick,” said Will Balser, coastal adaptation co-ordinator at Ecology Action Centre.

CBC reported the Brackley Beach and Cavendish areas of the province’s national park saw their worst damage in almost 100 years during the weekend storm.

Before hurricane Fiona, P.E.I. was already experiencing problems with erosion from waves breaking down its sand and sandstone coastline. Sea ice levels, which act as a buffer for the shoreline, have been historically low. To recover, the province’s dunes require a “steady, consistent wind and wave pattern to deposit sediments over months and years,” explained Balser.

Erosion is a natural process that has become more frequent and severe in recent decades. The province is now losing an average of 30 centimetres of land per year due to rising sea levels and stronger storms fuelled by warmer oceans. Both result from climate change, which Canada plays a major hand in causing: the country was rated the 10th-largest greenhouse gas emitter in the world in 2021.

"You can see that sort of orange glow around the shoreline ... on the satellite images. But you look at the wider plume that's gone out into the continental shelf, there are hundreds of square kilometres of sediment chucked out into the deep ocean, which will probably never be returned to land," said Balser.

"... If we're looking at having these storms more frequently and more intensely, we're never getting that long steady period of recovery that we need."

The intensity of hurricanes will continue to increase in the future, experts say, giving P.E.I.’s sand dunes insufficient time to naturally recover between storms. The University of Prince Edward Island’s Climate Lab has studied how erosion and sea-level rise will affect coastal communities in the province since 2012. In 2014, its modelling showed more than 1,000 homes are “at risk from coastal erosion.” Another “146 commercial buildings, five wastewater treatment settling ponds and even one wind turbine are shown in our study to be vulnerable” over the next 90 years. The lab made a visualization tool to show the effects.

The province is now losing an average of 30 centimetres of land per year due to rising sea levels and stronger storms fuelled by warmer oceans resulting from climate change. #PEI #Fiona

Adam Fenech, director of the Climate Lab, noted its study only accounted for current rates of coastal erosion. “All of our knowledge tells us that coastal erosion will increase as a result of rising sea levels, lowering landforms (coastal subsidence) and an increase in coastal storms,” he wrote in a 2014 post on the UPEI website.

Canada’s smallest province was hit hard by last weekend’s hurricane, which damaged buildings across the island. A significant number of people are still without power.

Our #coastsnap stations in #PEI captured some devastating beach and dune erosion from #HurricaneFiona . Shoreline change and volume losses from these and our other #coastie sites in Atlantic Canada coming soon. @DocHarleyMD @ScienceUWindsor @UWinResearch @CZCAssociation pic.twitter.com/qw5KvFUleD

Our building habits add fuel to the fire, Balser adds. Urbanizing coastal environments, such as dunes and forests, and building roads along the shoreline increase erosion. It raises a difficult question: what do people do who already live along the coastline?

Firstly, “we certainly shouldn't be building ... in these environments,” said Balser, noting both the provincial and federal governments could fund relocation efforts for communities.

“I think at a certain point, we need to recognize that it's no longer a question of reaction. We need to work on prevention. We need to look at possibly a managed retreat in some areas,” they said, pointing to places like California dealing with sea-level rise.

“It might be fine for the next year or two until another Dorian or another Fiona comes along.”

What are the equivalent of

What are the equivalent of mangroves in Canada. On Lake Winnipeg, some shoreline has eroded 200 feet in a century! Willows seem to help or slow down erosion of the similar sand non rock shoreline