The ‘Big Lie’ and other whoppers

The UN secretary-general accused “Big Oil” of “peddling the Big Lie” in a thundering address at Davos this week.

António Guterres was referring to PR campaigns to obfuscate climate science, and declared that, just like tobacco companies, “those responsible must be held to account.”

The UN chief wasn’t just looking backwards. Guterres declared the Paris goal of holding global heating to 1.5 C is “going up in smoke.”

Guterres could have had a few Canadian premiers in mind when he pointed his finger at the reckless expansion of fossil fuel extraction.

“Fossil fuel producers and their enablers are still racing to expand production,” Guterres said, “knowing full well that this business model is inconsistent with human survival.”

You’ll note these broadsides weren’t coming from Greenpeace or Greta Thunberg. But Greta did make an appearance on the outskirts of Davos.

With her boots still caked in Rhineland mud — just two days after her arrest for protesting a German coal mine — Thunberg and three other young climate activists were joined by none other than the head of the International Energy Agency.

Birol was just as straightforward as the UN secretary-general, if not as blunt in his language. Rather than accuse industry of “the Big Lie,” he accused it of using the invasion of Ukraine as an “excuse” to justify expansion.

The money being spent on a single LNG terminal could solve household energy poverty in sub-Saharan Africa, Birol said. Despite its enormous solar potential, Birol pointed to the fact that the entire region has less than one-third the solar power installed as Belgium.

Sitting beside Greta Thunberg were Uganda’s Vanessa Nakate, Helena Gualinga from Ecuador and Luisa Neubauer from Germany. The young women produced a “cease-and-desist” letter addressed to the oil and gas CEOs converging on Davos.

“I am very happy we have activist colleagues pushing this agenda forward,” responded Birol. In what passes for humour in energy world, he joked the International Energy Agency had produced an open letter, too: the agency’s groundbreaking net-zero report in 2021 that found no role for any new fossil fuel extraction.

We could sure use some of that straight talk in Canada. Instead, we have at least one premier pushing whoppers about the energy transition and specifically about federal efforts to make it a “just transition.”

Alberta’s Danielle Smith claimed this week that Justin Trudeau “will eliminate 2.7 million jobs.” The premier is “lying to Albertans,” writes Max Fawcett — the number refers to estimates of all Canadian jobs affected in some way by the global energy transition. The Alberta “War Room” (a.k.a. Canadian Energy Centre) issued a slightly more nuanced but equally misleading petition.

One Alberta minister even claimed Trudeau will "kill 2.7 million jobs in Alberta … that's straight from a Liberal memo."

An odd claim from a provincial minister — since there aren’t 2.7 million jobs (in total) in his whole province.

You might never emerge from under the covers if you were exposed peddling such egregious falsehoods. Not so, Alberta’s United Conservatives. The party is doubling down on social media, producing videos from the premier and, of course, fundraising: “Chip in what you can to help us fight back.”

But let’s turn back to the global stage for a moment because it’s been a week for whoppers. A major investigation has turned up “strong discrepancies” about forest offsets used by multinationals like Disney, Gucci and Shell, as well as airlines, sports teams and rock bands (sorry, Pearl Jam).

In his speech at Davos, the UN secretary-general warned that climate plans need to be “grounded in real emissions cuts.”

Specifically, plans must not “rely on carbon credits or shadow markets.”

A nine-month investigation into the world’s leading provider of carbon offsets found more than 90 per cent of its rainforest offsets are “phantom credits.”

The investigation looked into offsets approved by Verra and was carried out by the non-profit investigative journalism outfit SourceMaterial along with our Climate Desk partners at The Guardian, and Germany’s Die Zeit.

This is one hell of a bombshell story on forest offsets, by @pgreenfielduk, @hannahknuth, @Source_Mat

“The implications of this analysis are huge,” Barbara Haya, head of the Carbon Trading Project at the University of California, Berkeley, told SourceMaterial. “Companies are making false claims and then they’re convincing customers that they can fly guilt-free or buy carbon-neutral products when they aren’t in any way carbon-neutral.”

The investigation found only a handful of Verra’s rainforest credits reduced deforestation and 94 per cent had no climate benefit. One flagship operation in Peru has serious human rights abuses, including forced evictions and homes being cut down with chainsaws.

Even if regulation could clean up the carbon offset racket, we’d still be left with a whopper: almost all carbon offsets … aren’t.

They rely on poor public understanding of climate dynamics (surely not a problem among the esteemed readers of this newsletter). When a factory fires up its boilers or a driver turns on a fossil-fuelled car, the carbon spewed into the atmosphere stays there, effectively forever (300 to 1,000 years).

Most offsets are based on this deceitful notion, known as “avoided emissions.” And they’re pretty cheap. Often cheaper than actually cutting emissions. Which, in turn, leads to something Ketan Joshi calls “mitigation deterrence” — permission slips for companies and governments to delay real climate action.

We usually think about cars when we think about EVs. But electrification is happening even faster with buses and two-wheelers. Around the world, almost half of bus sales are now electric, and almost 40 per cent of two-wheelers.

Where things stand on vehicle electrification at the end of 2022 pic.twitter.com/0I0HmjmZmK

Heat pumps over half

Finland has installed heat pumps in over half the country’s households. It’s an important factoid for Canadians to know because Finland … gets cold.

1.5m heat pumps have now been installed in a country with just 2.7m households.https://t.co/nHXXDusF6m pic.twitter.com/mSjO2spp54

And in Germany, heat pump sales grew by over 50 per cent last year. 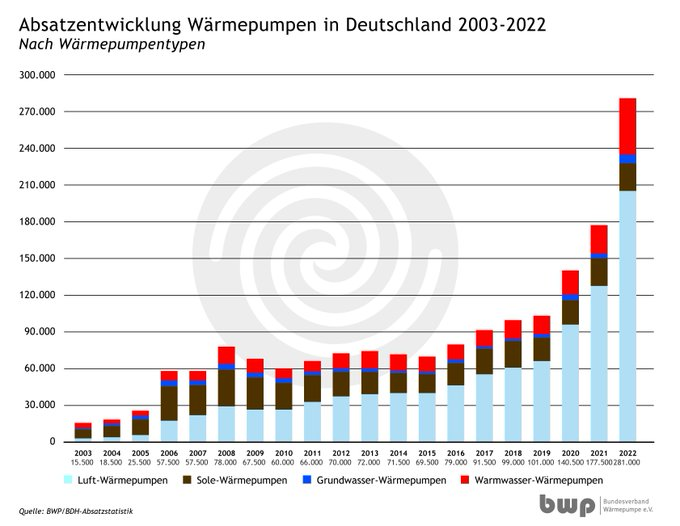 While we’re talking about Germany, at the end of 2022, over half of new cars came with a plug (one-third are fully battery-electric).

This summer, BP is planning to start drilling exploratory wells at Cape Freels, 400 kilometres off Newfoundland. “The fact that this project is even conceivable given the climate emergency is beyond reckless,” says Sierra Club Canada’s Gretchen Fitzgerald.

It’s all part of “a tsunami of offshore oil exploration plans swirling around Newfoundland and Labrador. The province has a plan to double offshore oil production by 2030 and is incentivizing companies to explore for new projects to make that goal happen.”

Check out the map of offshore proposals that John Woodside and Cloe Logan put together last year: 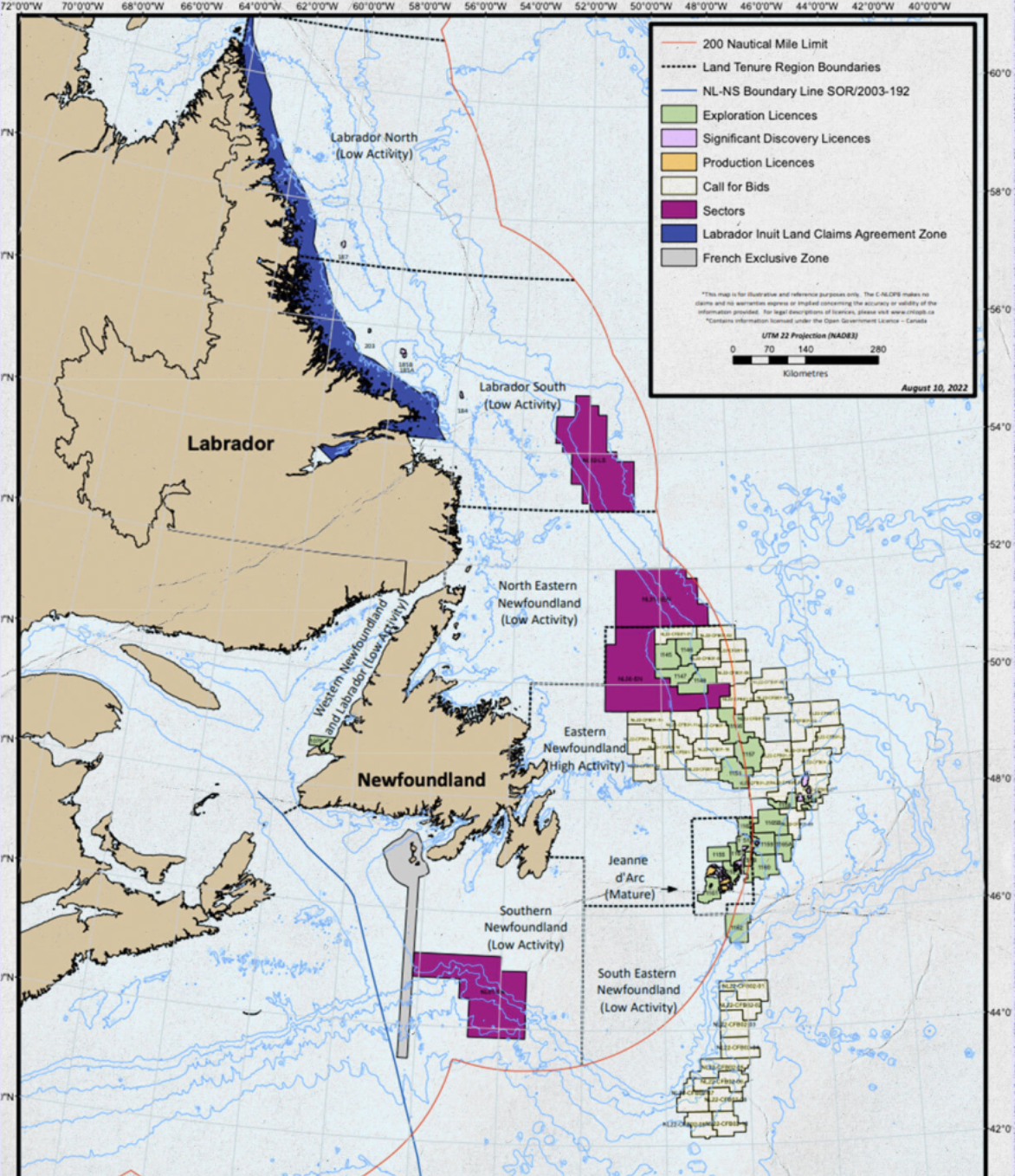 “The spoils of inflation are ending up largely in corporate profits, particularly in oil, gas and mining industries,” according to an analysis by David Macdonald for the Canadian Centre for Policy Alternatives. 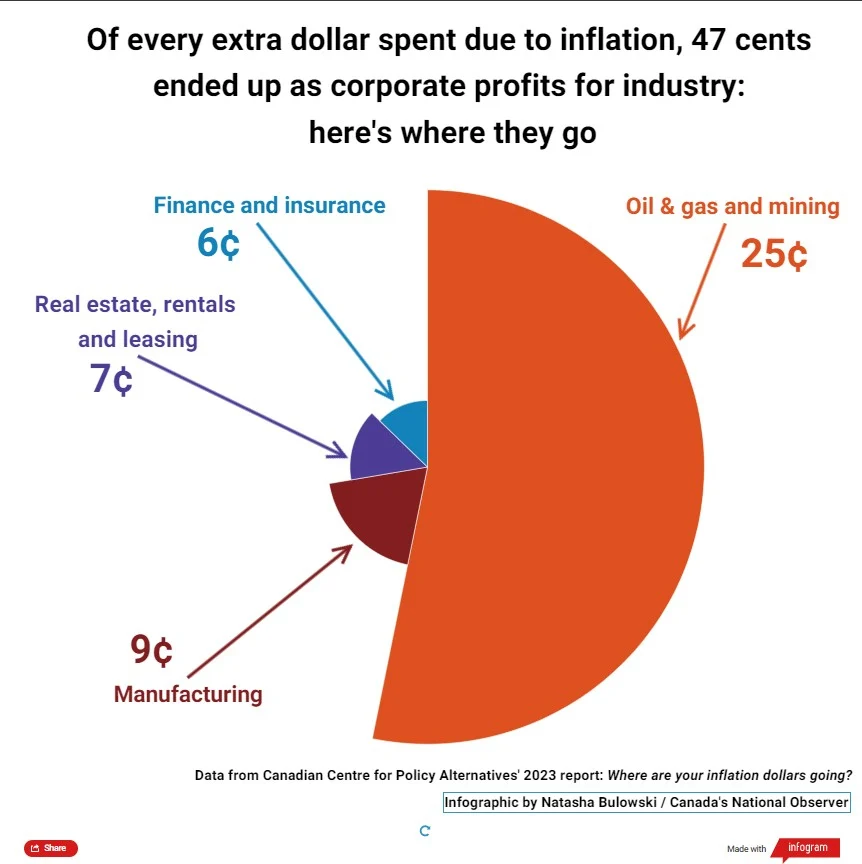 Four Canadian banks are in the global Top 20 for bankrolling fossil fuels despite pledging to go net zero. RBC is the biggest, coming in at ninth place globally. That’s according to an analysis of financial institutions that joined the Glasgow Financial Alliance for Net Zero (GFANZ). Since joining the alliance, the biggest banks have provided $270 billion to fossil fuel expanders.

“GFANZ members are acting as climate arsonists,” says Paddy McCully from Reclaim Finance. “They’ve pledged to achieve net zero but are continuing to pour hundreds of billions of dollars into fossil fuel developers.”

“Six pension funds passed with a mix of grades ranging from C- to B+, five are failing to make the changes necessary to protect Canadians from climate risk, and across the board, there’s a high level of inconsistency when it comes to ambition, detail, transparency and urgency.”

“None of them are actually aligned with the path required to protect the retirement security of beneficiaries and ensure a safe climate future,” Patrick DeRochie, senior manager at Shift Action for Pension Wealth and Planet Health, told Canada’s National Observer.

The province aims to cut diesel power generation 80 per cent in isolated communities, said Josie Osborne, minister of energy, mines and low-carbon innovation. The Haida Nation will use the funds to build a solar farm.

“I’m hoping we can get it all done within six to eight months,” says Chief Douglas Neasloss. “It’s very exciting.” 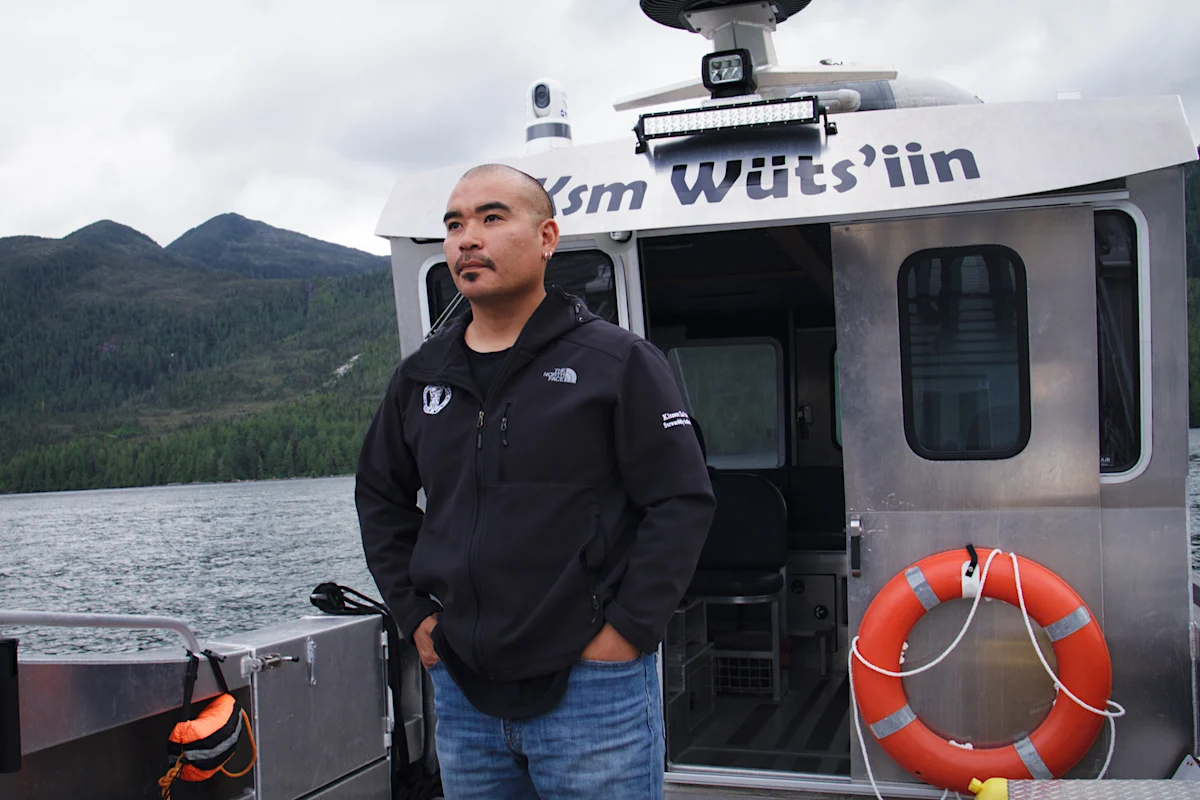 The Heiltsuk First Nation is using funds for home retrofits in the community of Bella Bella — boosing energy efficiency and clamping down on energy leakage. 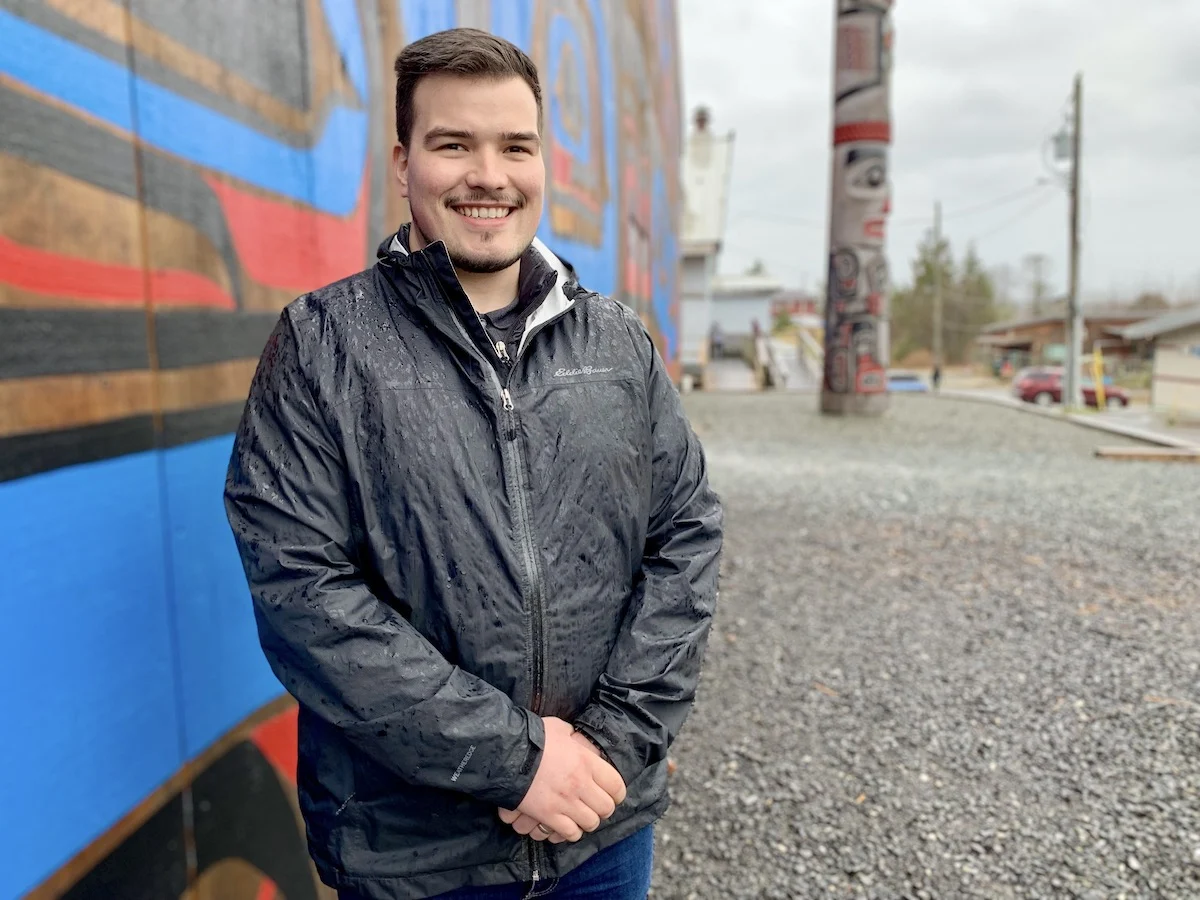 I’ll leave you with a couple of updates to last week’s Zero Carbon newsletter about gasthma. The New York Times has issued a “critical update” following a review of research on the health and environmental impacts of gas stoves:

“We no longer consider hanging on to your gas stove for as long as it works to be the best advice.”

And for those of you who could use a little levity (and don’t mind a bit of cussing), I’ll leave you with Rollie Williams’ Climate Town video It’s Time to Break up with our Gas Stoves. Rollie made the video in 2021, so it doesn't have the latest on childhood gasthma. But the look back at decades of gas industry advertising (including the origin of “cooking with gas”) makes for both hilarious and almost unbelievable viewing.

That’s all for this week. Thanks for reading Zero Carbon. Please forward it along and always feel free to write to me with feedback or suggestions for future newsletters at [email protected]