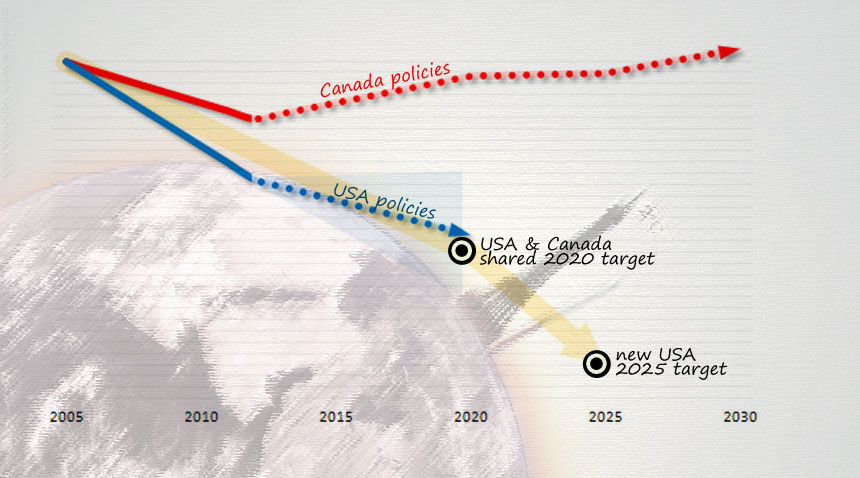 America has a plan and ambition. Canada is adrift and rudderless.

After the last major global climate conference, Copenhagen 2009, the United States and Canada linked their climate targets to each other. Each nation pledged to cut 17 per cent of their emissions by 2020.

Today, as the nations head into the critical Paris 2015 conference, the global pressure is building for each nation to show how they plan to meet their current targets, and to pledge more ambitious climate targets for the future.

USA has a plan. Canada doesn't.

So far, Canada is lagging well behind the Americans. We have no plan to meet our shared commitment.2 Worse still, our own government projections show our emissions rising far into the future.

In contrast, America says it has a plan.3 America is on track and has been leading the world in total climate pollution cuts since Copenhagen. In addition, the Americans recently committing to even more aggressive cuts by 2025.4

Leading the charge down south is that nation's environmental trend-setter, California, boasting the world's seventh largest economy; bigger than all of Canada's. California recently enacted an aggressive new set of climate laws.5 They are pledging a 40 per cent emissions drop by 2030 and 80 per cent by 2050.

To illustrate the widening gap between Canada and our largest trading partner, the USA, I collected the published data from each national government to create the chart below.

THE PROMISES — The black bull's-eyes show climate pledges made so far. The one above 2020 is the shared Copenhagen Accord commitment of USA and Canada. The broad yellow line is the path to get there.

USA — In marked contrast, the solid blue line shows that USA has been cutting emissions twice as fast as Canada and are therefore on track to the shared target. The dotted blue line shows USA government projections for their current and proposed climate policies.7 Roughly on target.

America has doubled their ambition with their newest climate commitment for 2025. They now promise to cut emission twice as much each year. 8

Crunch time for next round of climate targets

All major nations, including the USA and Canada, have agreed to announce their new 2030 climate targets within the next few months.9 The strategy is to have all national pledges publicly known well before the Paris 2015 conference at the end of the year. This will give the world several months to pile pressure onto foot-dragging nations.

What size cuts will wealthy nations like Canada, USA and EU28 be expected to sign up for?

Here's a hint: the International Panel on Climate Change says wealthy nations will need to cut emissions 35 per cent by 2030 for the world to have a chance to keep global warming below the agreed 2oC danger zone. 10

Patience running out for climate foot-dragging

Canada will find it ever harder to continue its low-ambition, foot-dragging on climate policy.

TOO DIRTY TO FAIL — Canada's emissions are too big to ignore, being one of the world's top 10 climate polluters.13

BACKBENCHER — Canada's economy is a "backbencher" compared to the massive economies of USA, EU and China.14 These Big 3 are half the world's economy. They have the clout to make "cabinet level" decisions on critical global issues if they decide to.

Australia recently learned the hard way about the new international reality for climate foot-draggers. Prime Minister Tony Abbott successfully reduced climate policies domestically. But when he tried to expand this outside his nation he was repeatedly thwarted.16

NOT SO LIKE MINDED — Abbott tried to create a conservative alliance among "like-minded", conservatively-led, commonwealth countries of Australia, Canada, Britain, India and New Zealand to counter USA pressure for faster global climate action. But Britain and New Zealand said climate change was a threat they wanted to act on, thank you very much.

G1 —Next he tried to keep climate change off the G20 meeting agenda he was hosting. That failed spectacularly, when other nations fought "trench warfare"17 to force climate change high on the agenda. As icing on the cake, President Obama "shirt-fronted" him with a rousing speech warning of the devastating impact climate change will bring to Australia's iconic Great Barrier Reef.

CHEQUE MATE — Abbott publicly called programs like the UN Green Climate Fund "socialism masquerading as environmentalism" and had refused to participate. But when the US pushed for contributions, Canada quickly broke ranks with Australia to contribute and stay in harmony with USA. Within weeks Abbott himself was writing his own cheque.

Up next: Canada's road to Paris leads through the tar sands

My next article will explore the primary reason Canada is falling so far behind its major trading partners on climate action: the Alberta tar sands are not doing their fair share with their climate pollution. If, instead, the tar sands did their fair share then Canadians would be close to meeting our current pledge and ready to do more.

1 Sources for: Kyoto quote and "completely aligned with US" quote .

2 Each year the federal government releases report on past and projected emissions. Data from most recent one, Environment Canada's Emissions Trends 2014, was used in this article

3 First Biennial Report of the United States of America is published by the US State Department. It describes past and projected USA emissions and the President's Climate Action Plan for meeting the Copenhagen Accord target.

6 Projected emissions through 2020 from Environment Canada's Emissions Trends 2014 report. Projected emissions from 2020-2030 from federal government's National Round Table on the Environment and the Economy report "Reality Check: The State of Climate Progress in Canada". Quote: " emissions continue to grow between 2020 and 2030 even under all existing and proposed policies"

7 First Biennial Report of the United States of America

16 the Guardian article: the political value of climate denial has fallen to zero