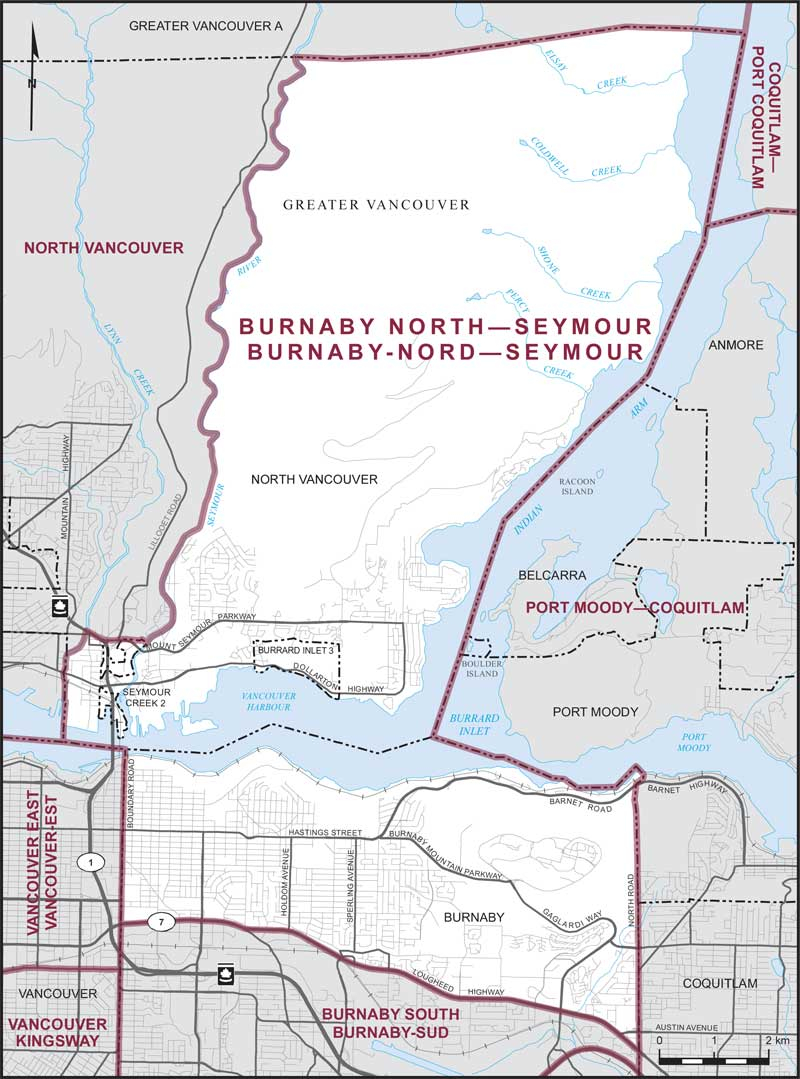 The event was in the federal riding of Burnaby North-Seymour, where the issue of Kinder Morgan's proposed oil sands pipeline looms large.

The party did not allow a single local reporter to ask a question.

Less than a year ago, more than 100 people were arrested on Burnaby Mountain in this riding for crossing into a court-protected zone of Kinder Morgan pipeline drillers.

Many in the area still worry about oil spills, tankers, climate change and the muscling-in of a multinational energy giant against local wishes.

Harper has been silent on those pipeline clashes. He's also been silent about Burnaby Mayor Derek Corrigan's demand that the National Energy Board cancel and restart the entire pipeline hearing process over concerns that Ottawa appointed a Kinder Morgan consultant to the pipeline review agency.

But oil projects—and other topics reporters wanted to raise— didn't stand a chance.

The rule at Harper events is five questions only.

Four questions go to national outlets who pay the Conservative party as much as $78,000 to be on Harper's campaign plane and bus, according to Vice.

The fifth question usually goes to a vetted local outlet. But this time, the one 'local' question went to a Global National reporter, so in effect Harper took no local questions.

Toronto Star columnist Susan Delacourt is not surprised. The author of Shopping for Votes has covered Harper from Ottawa for years, and says in non-election times the prime minister "goes months without taking a question." And now with the election on: "Their dealings with the media are entirely about public relations and marketing —that’s it."

“Mostly I think they just laugh at journalists… they think their primary tool of communication with the public are with advertising, or advertising-like media."

“Harper is the first marketing prime minister —this is what he does," said Delacourt, "It is about complete utility to him and what makes him look good."

So, instead of real engagement with the public through the press, what followed was a "highly organized, ideological rock concert," as one reporter put it, with as little press accountability as possible.

And while the leaders of the NDP, Liberals and Greens generally take questions from all comers at their events, including from audiences, this is not so at the well-financed Conservative campaign stops, which can number two to four per day across Canada.

The Tuesday event ended with the National Observer and other media taking the prime minister's campaign director Kory Teneycke to task for limiting the press' ability to hold elected officials to account at the height of a federal election.

Here’s an insider's look at how Harper's campaign contrives to control the press. 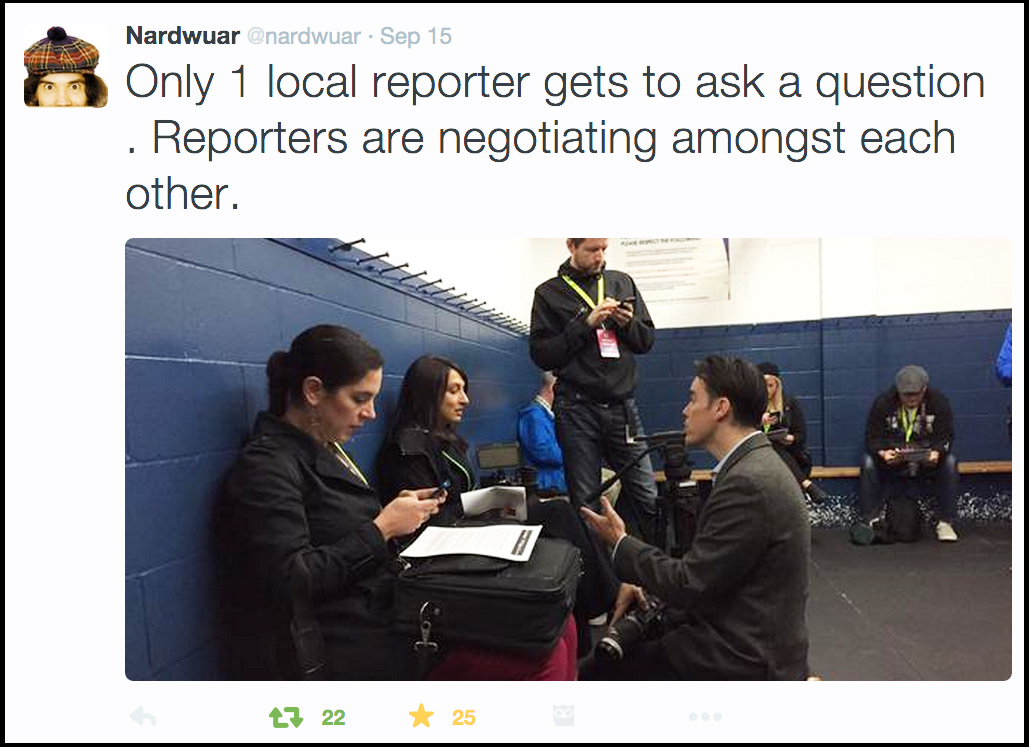 8:00 a.m. —National Observer arrives to a private Conservative press event that only the media know about. It’s at an ice skating arena in North Vancouver. Conservative staffer overheard training another to deny “bloggers” who may want inside.

8:15 a.m. — Outside the arena, neither hockey moms, nor the gas station attendant a block away, have any clue Canada's prime minister is in the building. “Who’s the VIP?” asked a parent. “Guess,” reacted an undercover RCMP officer pointing to a reporter’s neck-dangling Conservative press pass. Protesters are no where in sight.

8:35 a.m. —A former-Sun-TV-employee-turned-Conservative-campaign worker enters. He explains the 'one local question' rule. Scoffs ensue. Reporters try, but fail to coordinate. “We don’t negotiate our questions with other media," says Global National's Robin Gil who had already emailed her media inquiry to the Conservatives.

8:55 a.m. —Nardwuar is escorted out by Teneycke. Nardwuar returns, looking dejected. He tweets that’s he’s been denied an encounter with Harper. He's hopeful he can still swing a meeting with the prime minister after the formal event.

9:00 a.m. —“Photogs only” are escorted to within a few feet of Prime Minister Stephen Harper, who is seated. The cozy scene is the visual that the party wants in every newspaper and newscast: Harper enjoying a Tim Horton’s coffee while chatting with seniors. Background elders are equidistant. Six baked muffins are in front. Warm lighting. Sixty seconds later: “Alright —that’s it!” a campaigner shouts, and media are hurried out.

9:05 a.m. —Local media arrive to the main event room. “Five minutes!” yells an official. Media scramble to set up their cameras. There's barely enough time to adjust audio chords, tripods and lenses. Some 80 seniors with CPC wrist bands take their seats. The narrow room will make the crowd seem bigger on TV. "Protect the Economy” signs are handed out. Security men with ear pieces are everywhere.

9:10 a.m. —A Korean seniors choir sings 'Oh, Canada.' Harper is introduced. The prime minister thanks the choir for a “fantastic” national anthem. Harper reads a 12-minute speech from a teleprompter. He often steps to the side of his podium as if unscripted. He's not. Harper's voice often goes staccato: "Our —world —is —a —dangerous —and —unstable —place. The global economy is weak, it is in turmoil, examples are in the news everyday…” He ends by announcing a new $2,000 tax credit for single and widowed seniors. 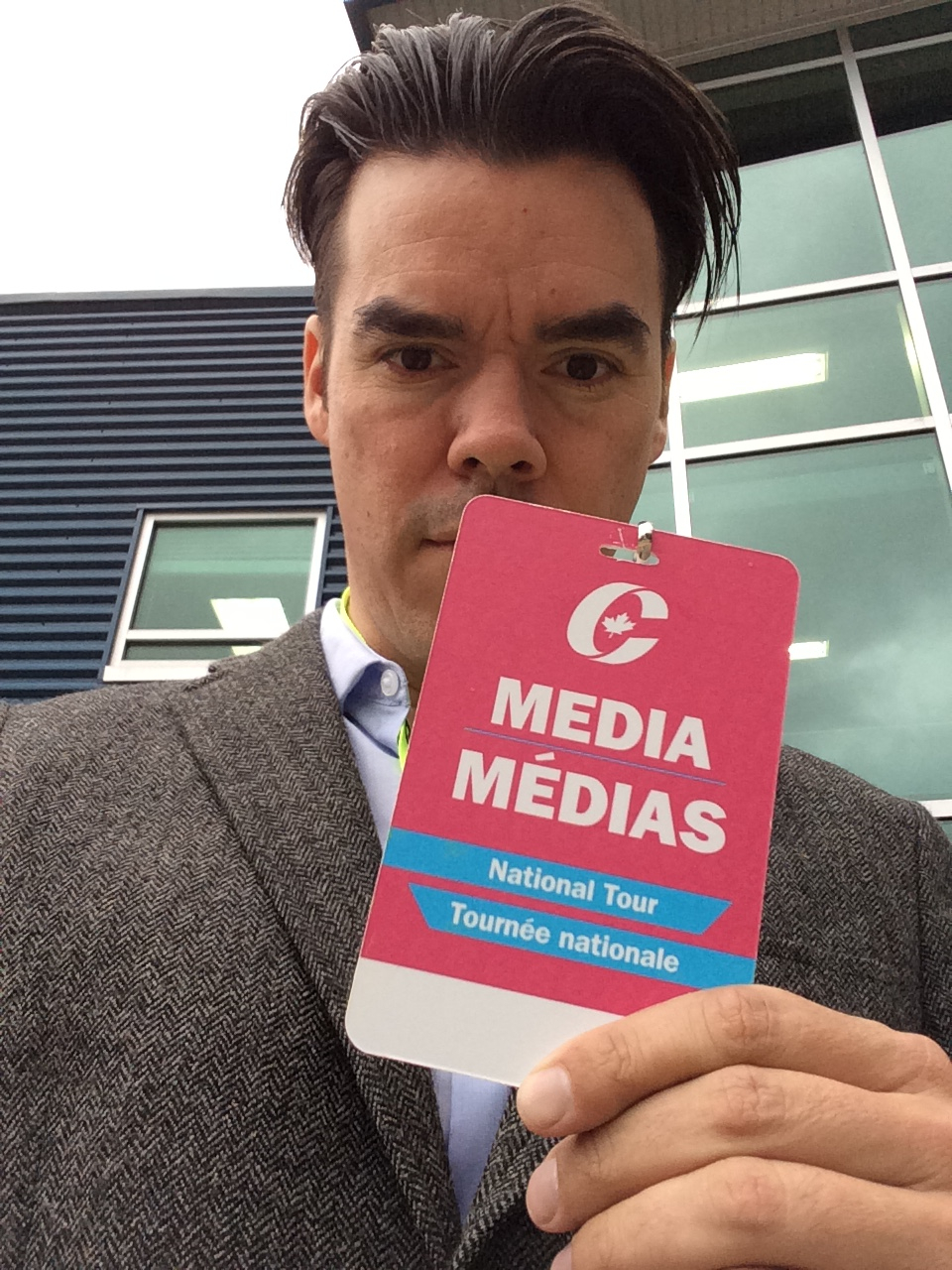 9:35 a.m. —Conservative event ends. Press passes are quickly snapped back from local reporters. Media are shuffled outside. That’s when the prime minister’s campaign director is challenged once more.

Reporter, Mychaylo Prystupa: “Kory, why just have one question from local media? You’ve decided that BC Global would get the one local question. There were a lot of other local media here. Why restrict the questions?”

Teneycke: “Well, we get to decide how we run our events. You guys get to pick the questions."

Prystupa: "I don’t get to pick —Global picked their question. I didn’t get to ask a question.”

Teneycke: “Well, the reporters asking the questions get to decide what question they want. We don’t get to decide that for them…that’s the way we’ve chosen to manage the campaign, that’s within our purview. We’ll be back a number of other times, and we tend to rotate around to the local reporters, so it was Global BC this time. I’m sure it will be someone else next time.”

Teneycke: “Well, if anyone has watched any of the questions that we’ve taken in this campaign, I’d say they were almost exclusively tough questions. I don’t think there’s any avoiding of tough questions."

Teneycke: “We get a lot of questions on a variety of topics. I think we answer a lot of tough questions. The questions are decided by the media. So if you have a problem with someone’s question, the nature of it, then you should take it up with that journalistic organization.”

Mackin: “That’s not how we work —we’re taking it up with you. You represent the prime minister, and the party that’s in power right now."

Prystupa: “Today, I’d like to email your campaign about the Burnaby Mountain situation that was one year ago, and how it was brought about, say analysts, by [Harper's] pipeline policies. The Mayor of Burnaby has said that he wants the entire Kinder Morgan process re-started. What does your campaign have to say about that?”

Teneycke: “You can e-mail me the question and I’d be happy to get back to you.” 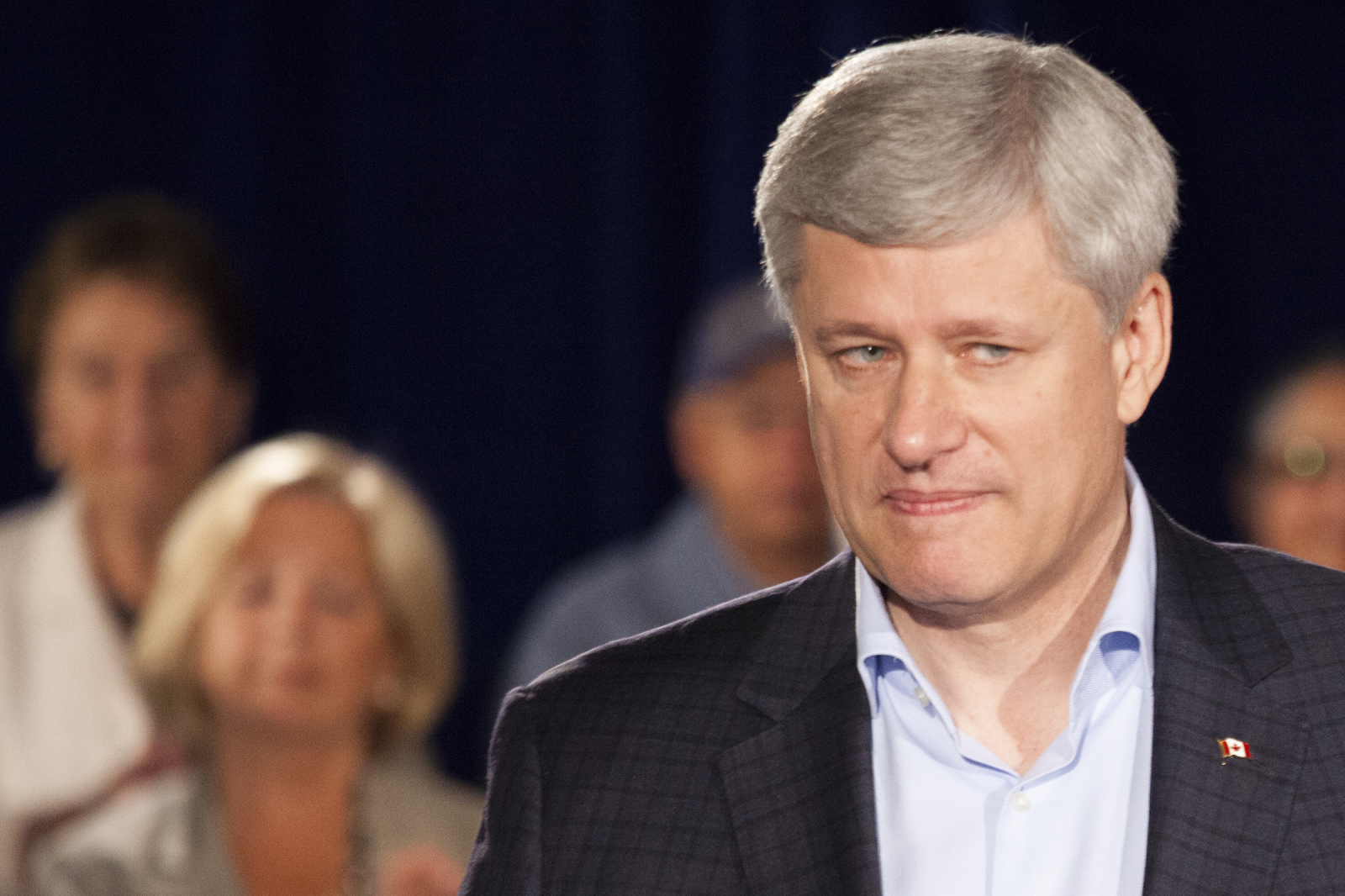 After the event outside, Nardwuar showed Kory Teneycke hockey-themed record albums still clinging to hopes of talking to the prime minister about the book Harper wrote on the history of hockey. Teneycke said they'd run out of time. "We’re doing some meetings with some seniors right now."

"I am getting up there in age myself, would that qualify me?” asked Nardwuar.

Observing this, Mackin said that given Teneycke's TV background masterminding the now defunct Sun TV (which Delacourt says was the marketing arm of the Conservative party), Teneycke should've jumped at the video opportunity with Nardwuar to make Harper seem more human. Tom Mulcair and Justin Trudeau both did in the previous three days. Not Stephen Harper.

“If I was a local news organization, I would wonder why I would bother sending someone to go cover [Harper campaign events]. Like if you’re not going to get a question, or you don’t want to be there to be a prop, there’s probably better things you can with your time."

Mark Bourrie, the Ottawa-based author of the book Kill the Messengers: Stephen Harper's assault on your right to know goes further.

"It's a fake election campaign... It’s really something out of the 1930s, quite frankly."

"I think this is what an election would look like if you were in a fascist country. It would be a field motorcade going from sealed event to sealed event and the media being used to look like there is media, and not being allowed to do its job."

​For the record, Harper finally told a Canadian Press reporter in August why he limits questions at his events.

"I think you're all very aware of how we've structured our press conferences. This is a long-standing policy. It was cleared with everybody. And what's important to me is that we're able to answer a range of questions on a broad range of subjects. That's why every day I speak to a different topic," Harper explained.