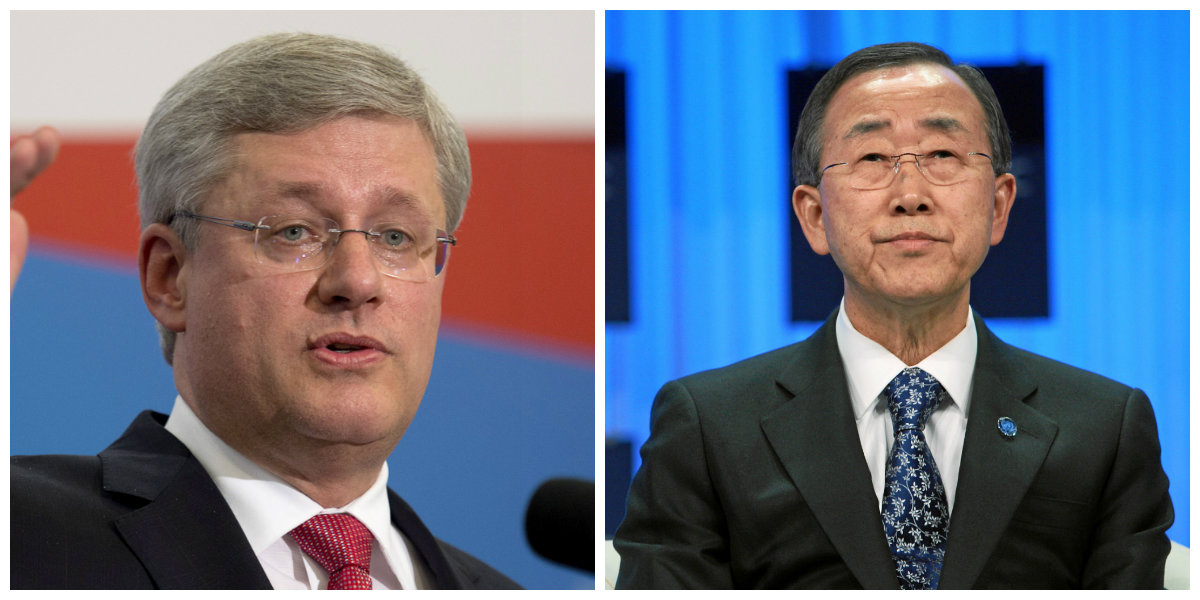 In Harper’s absence, heads of government including Germany’s Angela Merkel and Indian PM Narendra Modi are expected to discuss what the Conference of Parties (COP) 21 talks in Paris must achieve— primarily, building a low-carbon economy aimed at keeping global warming under two degrees.

“It’s time for all countries to get serious about the very real threat and consequences of global warming. We hope this event will spur the momentum for Canada to join other countries in Paris to develop a fair and legally-binding agreement to reduce greenhouse gas emissions and limit global warming to two degrees,” said Peter Robinson, CEO of the David Suzuki Foundation in a statement dated Sept. 25.

The New York discussions build on an earlier pledge for ‘decarbonizing’ the global economy made at the G7 Summit in June, a goal re-stated by German Chancellor Angela Merkel and Brazil’s President Dilma Rousseff at a recent bilateral summit.

The Brazilian commitment to decarbonization marks the first time a major emerging economy has backed such a goal, itself a significant step as many developing nations have previously expressed resentment that industrialized countries have not taken responsibility for pumping greenhouse gases into the air.

Nonetheless, other emerging economies are now stepping up to the plate in Brazil’s wake, with China rolling out a new national carbon cap and trade system, thereby aligning its climate change policies with the USA’s Clean Power Plan to cut emissions by 32 per cent by 2030.

On that same day, India announced its intention to ramp up renewable energy output fivefold by 2020, moving away from its traditional use of coal power that it uses to generate 254 GW of electricity per day.

To encourage more countries to follow the lead of Brazil, China, and India, world leaders will likely endorse greater climate financing to support countries transitioning to clean energy. This may mean heads of state calling on multilateral development banks to align their investments with the goal of keeping emissions within two degrees.

“Out of their discussions at Sunday’s lunch, leaders must send a powerful signal to citizens and investors alike that they are committed to avoiding the worst impacts of climate change, and that this requires an agreement in Paris that accelerates the shift away from fossil fuels towards a global economy powered entirely by renewable energy resources by the middle of this century,” said Alden Meyer, Director of Strategy and Policy at the Union of Concerned Scientists.

Global leaders will likely set a requirement for all countries to regularly return to the negotiating table and increase their contribution to global climate action. This diplomatic ‘ratchet mechanism’ is one way to ensure that real-world developments can be incorporated into more ambitious national climate plans.

“Sunday's lunch with Ban Ki-moon and State leaders underlines the importance that they recognize the necessity and the urgency to act on climate change, but it also underlines their concerns that the COP in Paris may not achieve all its objectives," said Normand Mousseau, a physics professor at the University of Montreal who also serves as research chair of his institution’s department of complex materials, energy, and natural resources.

"It is therefore a bold initiative by Ban Ki-moon to gather leaders who can play a key role in launching a positive momentum in the last stretch on the road to Paris."

Despite public concern and the optics of the 2015 federal election, the Harper government has missed out on the buildup to Paris, skipping July’s Climate Summit Of The Americas summit in Toronto and committing at the G7 Summit only to end all fossil fuel production and use by 2100, a move slammed as inadequate by critics.