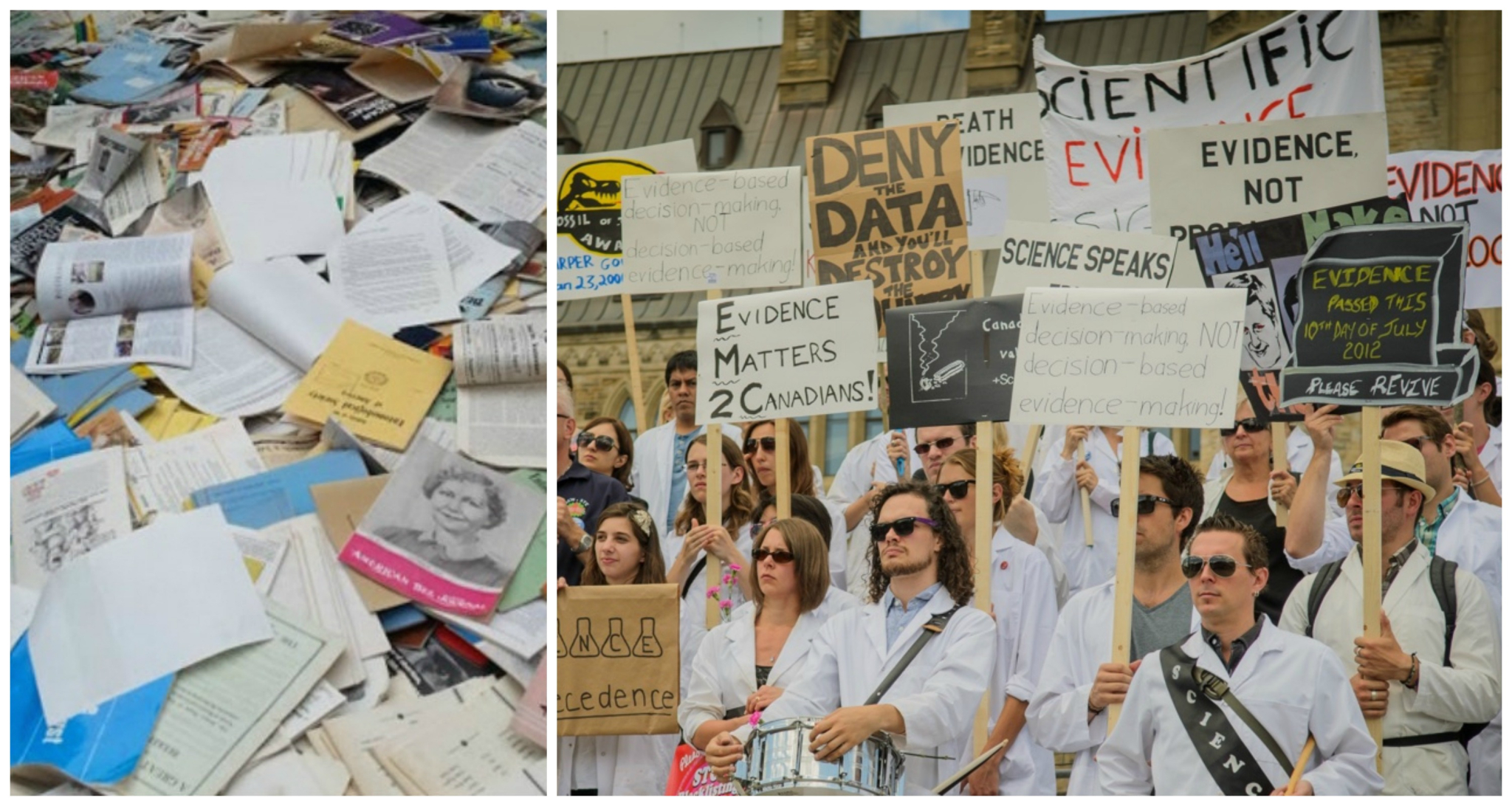 At first, the closing of the library at the Lethbridge Agricultural Centre looked methodical. Staff were informed of the closure in July. Then in early August they were told they could help themselves to items from the collection.

And then it all went south from there: in mid-August summer students began filling an extra-large dumpster with journals and reports. Reportedly, one scientist jumped into the dumpster to rescue a set of journals. Distressed staff began to select more and more books from the collection in order to rescue them.

The dumped books turned into news, bringing more embarrassment upon the federal government. The Conservatives have attracted international negative attention for closing down research stations, and muzzling scientists.

Harper has shut down 16 research libraries during his time in government. While the closures have attracted some media attention and news stories, there have been few detailed reports.

Now an anonymous source familiar with the Lethbridge closure has stepped forward and provided National Observer with an inside perspective on exactly what happens when the government shuts down a science library.

National Observer very rarely uses anonymous sources, but fear of reprisal appears to have silenced federal researchers and employees, in this and many other stories.

Even with an unprecedented inside look at how the Lethbridge library closure was handled, more questions than answers remain. What has happened to the collection? What was kept and what was discarded? What, if anything, is being digitized and how will scientists access those documents?

By way of example, the library held a number of historical journals and diaries, some dating back to the early 1900s. It’s believed these documents are still on site, but no one appears to know for certain.

In July, library staff received an email informing them of a “collection consolidation.”

The email told staff that since July 2012 the department has concentrated on the provision of core services and electronic information resources at the desktop through the Knowledge Services Library (the former Canadian Agriculture Library).

According to the email, the government is consolidating all physical collections, with several more in process. The consolidation procedures were supposed to include evaluation of all unique and relevant materials with subsequent relocation to the library headquarters in Ottawa; any items no longer considered relevant or as duplicates would be offered to staff to be kept as “office copies.”

The email concludes: “It should be noted that services are not disappearing, but that we will provide services in a different fashion.”

The consolidation notice email came as a shock to staff.

“Though this collection consolidation has happened to other research centres over the last couple of years, we weren’t aware it was going to happen to Lethbridge,” the source said.

“In fact, when it happened to Swift Current, they were told it wouldn’t matter, because they would have access to Lethbridge resources.”

The Lethbridge library was part of a networked association of Agriculture Canada libraries. Linked through a central database, the libraries could order books from each other. Locally, Lethbridge provided service to Agriculture Canada staff, Alberta provincial staff and the public. College and university students used the facility as did local historians.

While the library was able to maintain its holdings, over the last several years it lost space. More recently, building renovations pushed the library down to the basement of the building, while the library itself was taken over as office space. The basement library took up about 1350 square feet.

On August 10, library staff received an email advising them that they could select “office copies” from the collection, including from any items on the shelves, atlases on the atlas stand and maps in the map cabinet. Included as well were a French language collection on the second floor of the building, and a number of other atlases and dictionaries.

At the time of the email, many staff were away on summer vacation or out in the field doing research.

The disposal of the collection took place over a couple of weeks in August. A couple of summer students boxed up journals. The boxes sat outside the basement library on pallets for a few days. But then, over the next week-and-a-half, the students began filling an extra-large dumpster with journals and old reports.

When the news story about the trashing of the library’s holdings broke, the dumpster was immediately emptied.

At first, staff didn’t realize what was going on. It wasn’t until a couple of days after the first lot had been dumped that word got out.

“People were disgusted and disheartened,” the source said. “At that point, people began going and rescuing more and more books. This is maybe what Agriculture Canada means when they say 'materials of value were saved.'”

The rescued books are now in various individuals’ offices, with no accessible record of where they are. The source said in this state the books are essentially of no use to anyone but the person who rescued them. The rescue is, at best, a temporary measure, given that the books cannot be taken off-site. When a researcher is done with them or leaves the centre, the books must be disposed of in the way that was intended, according to the source.

One more rung on the ladder of cuts

The closure discouraged research centre scientists and staff. It wasn’t just the fact that valuable documents and journals were trashed, but that they weren’t even offered to other institutions or the public.

“These were taxpayer-funded resources, and they would have been of use or value to many people,” the source said. The books included ones of general horticulture that could have easily gone to a public library; graduate theses researchers donated to the library; and scientific methodology books of value to another laboratory or student.

“This is just one more rung on the ladder of cuts to and restrictions on research that people are facing — frankly, people are disheartened,” the source said.

The source scoffed outright at the idea of the federal government digitizing the work, which is a claim government spokespeople have made repeatedly. “There has been no massive digitization project,’ the source said.

“If one thinks about it, there is no way that Ag Canada could have digitized its entire collection, unless infringing on publisher’s copyright. Going forward, I have heard that the library will be trying to purchase digital copies of books.”

While many scientific journals are available online through subscription, if the subscription lapses, researchers will lose access. Many journals have digitized their material up to a point. Staff were told that if they wanted to retrieve a book from their collection, they will have to order it and check it out from Ottawa.

But they received no clear answer as to how much that might cost, and who would pay. In the course of research, scientists could look through several books or may scan the shelves of an entire subject to find what they’re looking for.

The source noted, “A book that hasn’t been looked at in 30 years may now contain the nugget of information required. But not having that book on a shelf means that nugget may never be found.”

In the meantime, when the story of the library closure broke in August, the process of clearing the collection was put on hold. Boxes and boxes of books on pallets are sitting in the basement hall of the research centre and books remain on the shelves.

“If nothing wrong was happening, why stop it?”

Agriculture Canada was contacted for comment on this story but has not responded.

Public service union helped save library's documents from the dumpster