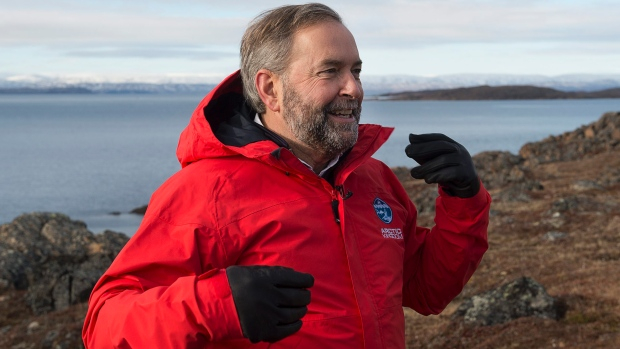 NDP Leader Thomas Mulcair pledged Wednesday to end the muzzling of scientists in the federal government if the NDP formed the next government.

“In the face of overwhelming evidence of climate change, Stephen Harper made it his priority to muzzle scientists and to stop leading experts from sharing important scientific information whenever it didn’t suit Conservative ideologies and objectives,” Mulcair said.

He promised a NDP government would reverse the “alarming trend” and promote the voice of Canada’s scientists.

National Observer contacted the Conservative Party of Canada for reaction to Mulcair’s comments, but neither party press secretary Bryn Weese or Kory Teneycke, the party’s chief spokesperson, responded by deadline.

Trudeau said if the Liberals formed the next government, they would revoke the rules and regulations silencing scientists and would allow them to speak freely about their work “with only limited and publicly-stated exceptions.”

Mulcair also said the NDP would establish a Office of the Parliamentary Science Officer to support parliamentarians with factual, science-based analysis.

Mulcair made his remarks while on a visit to Iqaluit, which is on the frontlines of climate change adaptation. The Nunavut Climate Change Centre has collected observations from elders, hunters and community members on the changes to the land.

Their observations include thinner sea ice that freezes later and melts earlier; permanent snow patches decreasing in size; unpredictable weather; warmer temperatures; and the sighting of new species in the area.

It’s not the first time the NDP have said they would establish a Parliamentary Science Officer. In 2014, NDP MP Kennedy Stewart, the opposition science and technology critic, introduced a private member’s bill calling on the Canadian government to create the position.

Stewart’s petition for the position was signed by hundreds of scientists and professors from universities and labs across Canada.

Similarly, Trudeau has pledged to create the position of Chief Science Officer. That individual would ensure government science is freely available to the public, that scientists are able to speak freely about their work, and that scientific analysis is appropriately considered in government decision-making.

The David Suzuki Foundation’s science and policy manager, Ian Bruce, said the foundation has advocated for science-based policy and decision-making at all levels of government in its 25-year history.

“We believe governments must use the best available evidence to resolve the many serious challenges Canada faces, from species at risk, to habitat loss, to ocean protection, to climate change,” Bruce said.

The muzzling of scientists under the Harper government has become a serious issue in recent years, attracting petitions, protests and negative editorial comment.

In 2013, Democracy Watch and the Environmental Law Clinic of the University of Victoria filed a complaint with the federal Information Commissioner, calling for a full investigation. The complaint followed from a report the two groups released on the lack of freedom of federal government scientists to speak with the public and journalists.

As National Observer reported earlier this week the Information Commissioner’s report is unlikely to be released before the federal election, October 19th.

In the fall of 2014, 815 scientists from 32 countries sent an open letter to Harper urging him to “remove the excessive and burdensome restrictions and barriers to scientific communication and collaboration faced by Canadian government scientists.”

The letter quoted a New York Times editorial that opined that new communications restrictions on scientists were nothing less than “an attempt to guarantee public ignorance.”