Harper's rivals try neutralizing niqab with wedge tactics of their own 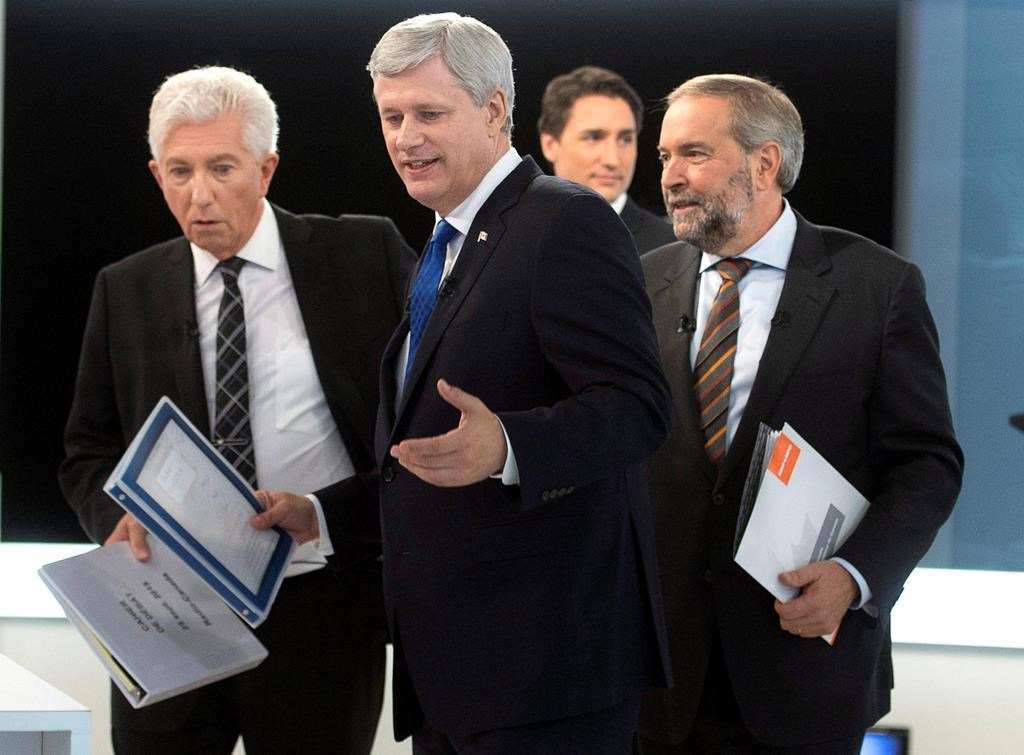 OTTAWA — The campaign firestorm over women who wear the niqab flared up in Stephen Harper's face Friday as his Liberal rival tried to turn the Conservative leader's wedge issue against him with a single word: abortion.

As predicted, the hot-button question of whether to allow the Islamic face covering during citizenship ceremonies made for a pivotal exchange during the French leaders' debate, the last face-to-face clash of the 2015 campaign.

But it quickly veered into a heated exchange between Harper, Liberal Leader Justin Trudeau and NDP Leader Tom Mulcair about women's rights — everything from abortion to gender equality to the number of female candidates.

"You have a lot of nerve to come here talking about Quebec values and defending women — you have more men in you caucus who are anti-abortion than there are women wearing the niqab in Quebec," Trudeau told Harper.

"Since you're talking about personal values, are you going to tell us here, tonight, for the first time, whether you are pro-choice or pro-life?"

Harper's reply: "My position for ten years has been I don't intend to re-open this debate."

And then: "Mr. Trudeau, you talk about divisions. The only divisions here are between the NDP and the Liberals with the rest of the population. Almost all public opinion is in favour of a policy of taking the oath of citizenship without a (face) covering."

Mulcair, whose Quebec base of support has been taking the brunt of the impact of the Conservative and Bloc Quebecois support for the niqab ban, chimed in.

"That is reflective of a profound contempt for Canadian values ... you are targeting a community to play politics. It's undignified of a Canadian prime minister to play this game against a minority."

Still the presumed front-runner in the province, Mulcair spent much of the debate reassuring his large francophone audience, hoping to plug what appear to be growing leaks in the NDP vessel's made-in-Quebec hull.

Mulcair said that while he understands the niqab is an emotional issue for many people, he supports the existing rule that states anyone seeking citizenship must uncover their face to identify themselves before swearing the oath.

He also tried to shield his position behind court decisions that have ruled against a ban on face coverings during the ceremonies.

"It's no longer a question of what we like or dislike," he said. "It also puts me ill at ease."

The NDP position differs from the stances held by Harper and the Bloc's Gilles Duceppe, who have both called for niqab-wearing women to show their faces during the actual ceremonies.

Like Mulcair, Trudeau said women should be able to choose how they dress. But unlike the NDP, the Liberals aren't counting on much support from the voters who have expressed the most concern over the so-called niqab debate: Quebec nationalists.

Harper, who has seen polls suggest his party is on the rise in Quebec, hammered away at Mulcair's apparent vulnerability in Quebec on the issue.

"Mr. Mulcair, you're not even capable of convincing your own MPs of this position — one case is one case too many," Harper said, referring to NDP candidates in Quebec who have raised concerns about the party's position on the niqab.

"Your position is totally disconnected from Canada's reality and the opinions of Canadians and Quebecers."

The event, which was considerably calmer than the first French-language debate eight days earlier, touched on a wide range of subjects — from the environment to foreign policy, from firearms registration to the state of the economy.

Mulcair was under pressure to shield the NDP, which won 59 of Quebec's 75 seats four years ago, from the Tories in the Quebec City area, the Liberals in Montreal and the Bloc Quebecois in some of the province's rural regions.

He was also out to shore up his credentials as a social democrat.

He used the early segments to spar with Harper, criticizing the prime minister for committing to raising the age of retirement age to 67 from 65 and accusing him of giving tax-relief "gifts" to large companies.

"It's the same song again for the NDP: They will increase taxes to balance the budget and it will destroy jobs in Ontario and in British Columbia. We'll lose a quarter of a million jobs."

Later in the contest, Mulcair criticized Harper for Canada's military role in the Middle East, telling him: "you've never met a war you didn't like."

Mulcair also battled with Trudeau for voting in support of Conservative budgets.

"Mr. Trudeau, in my family, we've always said that actions speak louder than words," Mulcair said. "I'm going to tell you that you're talking about Harper budgets, you supported by voting in favour of, numerous Harper budgets."

Despite the "failure" of Harper's economic policy, the NDP would balance the Conservative budget, said Trudeau — "which means you can't invest in families, you can't lower taxes for those who need it, you don't have the capacity to give, immediately, help to municipalities and regions that need it."

Harper admits Canada is in throes of recession during debate