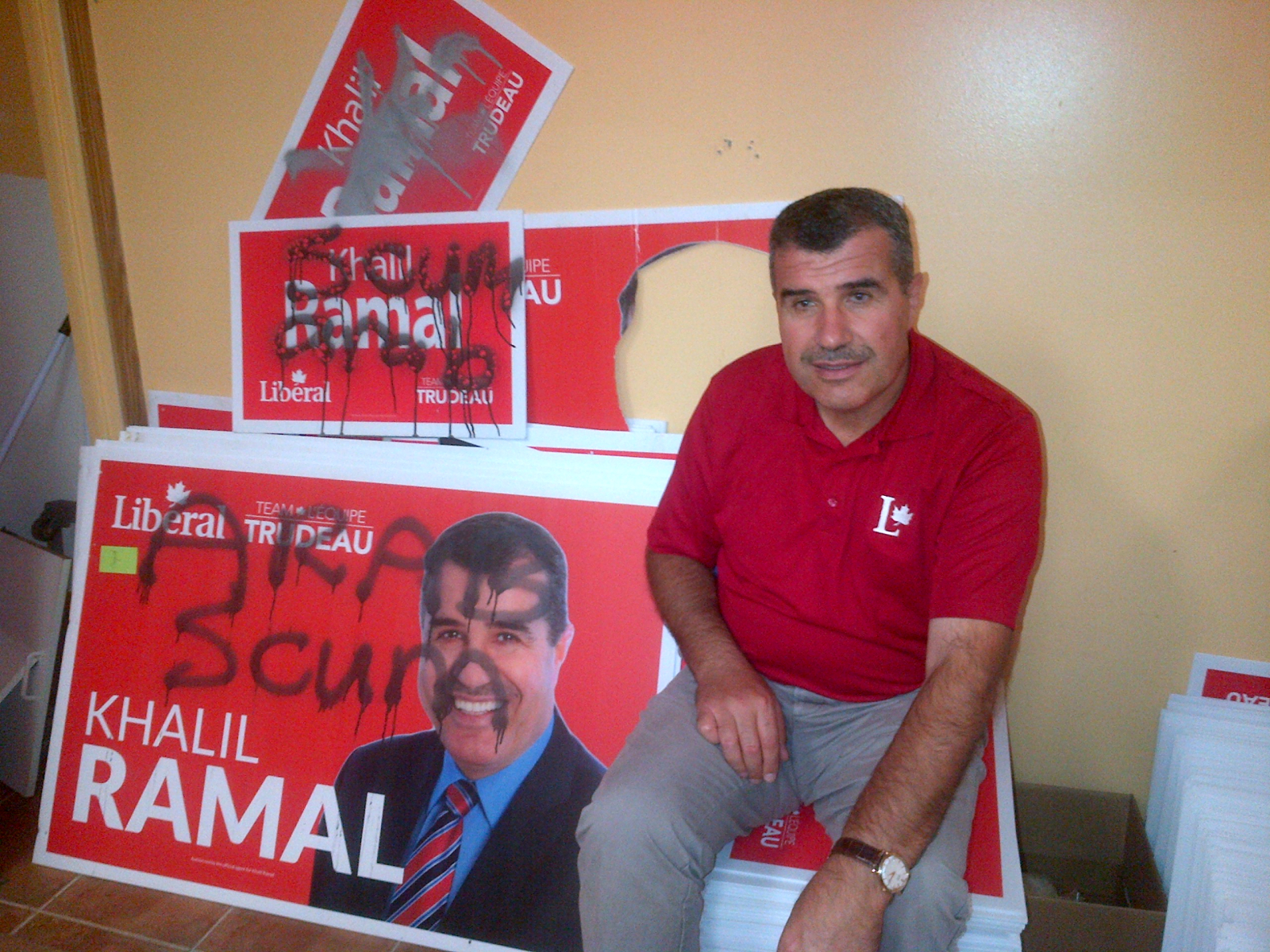 Khalil Ramal with some of his defaced election signs.
Previous story
Next story

Appalled by racist messages in an election campaign increasingly marred by anti-Muslim attacks, the Grit candidate for London-Fanshawe refused to let the incident bring him down. After reporting the vandalism to police, he's been pressing on with his political campaign.

“I’m not going to be discouraged. I’m going to carry on what I’m doing because that’s why I put my name forward in this riding,” said Ramal, who immigrated to Canada from Lebanon's Bekaa Valley region in 1989.

But racism being unleashed during an election campaign was a new and unsettling experience for Ramal, who previously served as an Ontario MPP and has never before suffered such prejudice.

Anti-Muslim incidents have been on the rise, after the topic of niqabs at citizenship ceremonies turned into a key election debate topic.

The niqab row erupted after Zunera Ishaq won a legal challenge against the Conservative government last month, allowing her to wear the veil at her citizenship ceremony, which finally took place on Oct. 9. Her court victory overturned a ban that was first enacted by the government four years ago.

The Harper Conservatives have already stated they would appeal the ruling if re-elected on Oct. 19.

The flames were fanned yet further when Prime Minister Stephen Harper uttered the phrase “old stock Canadians,” at the Sept. 17 Globe Debate in Calgary, a remark that many felt has racist undertones.

“It’s desperation,” said Ramal of Harper’s election campaign, which also included references to 'barbaric cultural practices' aimed at Muslim Canadians. “What sort of language is this?”

But such language has consequences: last month a veiled, pregnant, Muslim woman was assaulted by two teenage boys in a Montreal suburb. They tore off her head scarf and knocked her to the ground.

The attack came days before the Harper government pledged in early October to establish an RCMP tip line for Canadians to report suspected ‘barbaric cultural practices’ in their neighbourhoods.

The niqab issue gave the Tories a temporary boost in the polls, after weeks of trailing behind the NDP and Liberals. After the initial surge, however, Harper’s Conservatives are once again slipping behind Justin Trudeau’s Liberals.

Previously, Conservatives were getting hammered by the Grits, Greens, and NDP alike on everything from economic policies to environmental protections, before they managed to exploit identity politics to their advantage.

Some attribute Harper's strong statements against the niqab to Australian political strategist Lynton Crosby, who has used concerns over immigration, race, and Islam as vote-winners when working on election campaigns of right-wing politicians in both his home country and Britain.

But such divisive wedge-issue politics decried by both Ramal and Liberal leader Justin Trudeau look set to continue. During an Oct. 7 campaign speech in Saskatoon, Harper indicated on Wednesday that a re-elected Tory government would consider legislation banning niqabs for anyone working for – or doing businesses with – the federal government.

If enacted, such legislation would be a national version of Quebec’s Bill 64, a piece of legislation tabled in Quebec that Harper praised last week.

“I believe the Quebec government has been handling this controversial issue in a responsible manner and we will do exactly the same thing in Ottawa," Harper told his Saskatoon audience.

While both Trudeau and NDP leader Thomas Mulcair have spoken consistently against the politics of ‘fear and division’, the Greens’ Elizabeth May delivered perhaps the most stinging critique of Harper’s tactics, saying that the PM “should be ashamed,” of resorting to such methods to win an election.

“It's an attempt to fan what I hoped didn't exist in Canada — the flames of xenophobia," May told The Huffington Post on Oct 9. "And yes, Muslim Canadians are feeling targeted."

She related how one young woman whose Pakistani parents immigrated to Canada before she was born, told May how she was scared for the first time in her life due to the bigotry that has been whipped up during the federal election campaign.

"She's actually feeling vulnerable at a very fundamental level about whether she's welcome in Canada," said May. "She's Canadian. She was born here."

Calgary mayor Naheed Nenshi, himself a Muslim, also joined the fray, denouncing Harper’s playing of the race card as “unbelievably dangerous stuff,” and denounced such electoral tactics as “disgusting.”

Jason Kenney, Minister of Defence and Multiculturalism, shot back by saying it was “people like Nenshi,” who were the problem.

However, thousands of Canadians rallied to the mayor’s defence on social media, pillorying Kenney for his comments.

As for Ramal, his party may yet prove to be the final beneficiaries of Harper’s divisive tactics, as the Grits start leading in opinion polls just nine days before election night.

Trudeau’s party are campaigning on a platform of tax cuts for and investment in the middle class, greater funding for infrastructure, and a more constructive environmental policy including shifting federal subsidies away from oil sands and into renewables, a platform that appeals to increasing numbers of voters.

According to the latest Nanos poll, Liberals are leading at 34.8 per cent support, ahead of both the Conservatives at 28.6 per cent and the NDP at 24.9 per cent.

The CBC’s Poll Tracker rates the Grits at 33.6 per cent support, ahead of both the Tories’ 31.8 per cent and the NDP’s 23.8 per cent. If an election is held today, the Liberals would win a minority government at 131 seats, well short of the 170 needed for a majority.

In Ramal’s own riding, however, the NDP are strongly in the lead at 47.5 per cent, ahead of the Tories’ 28 per cent and the Liberals’ 20.1 per cent, according to Three Hundred Eight’s riding projections.