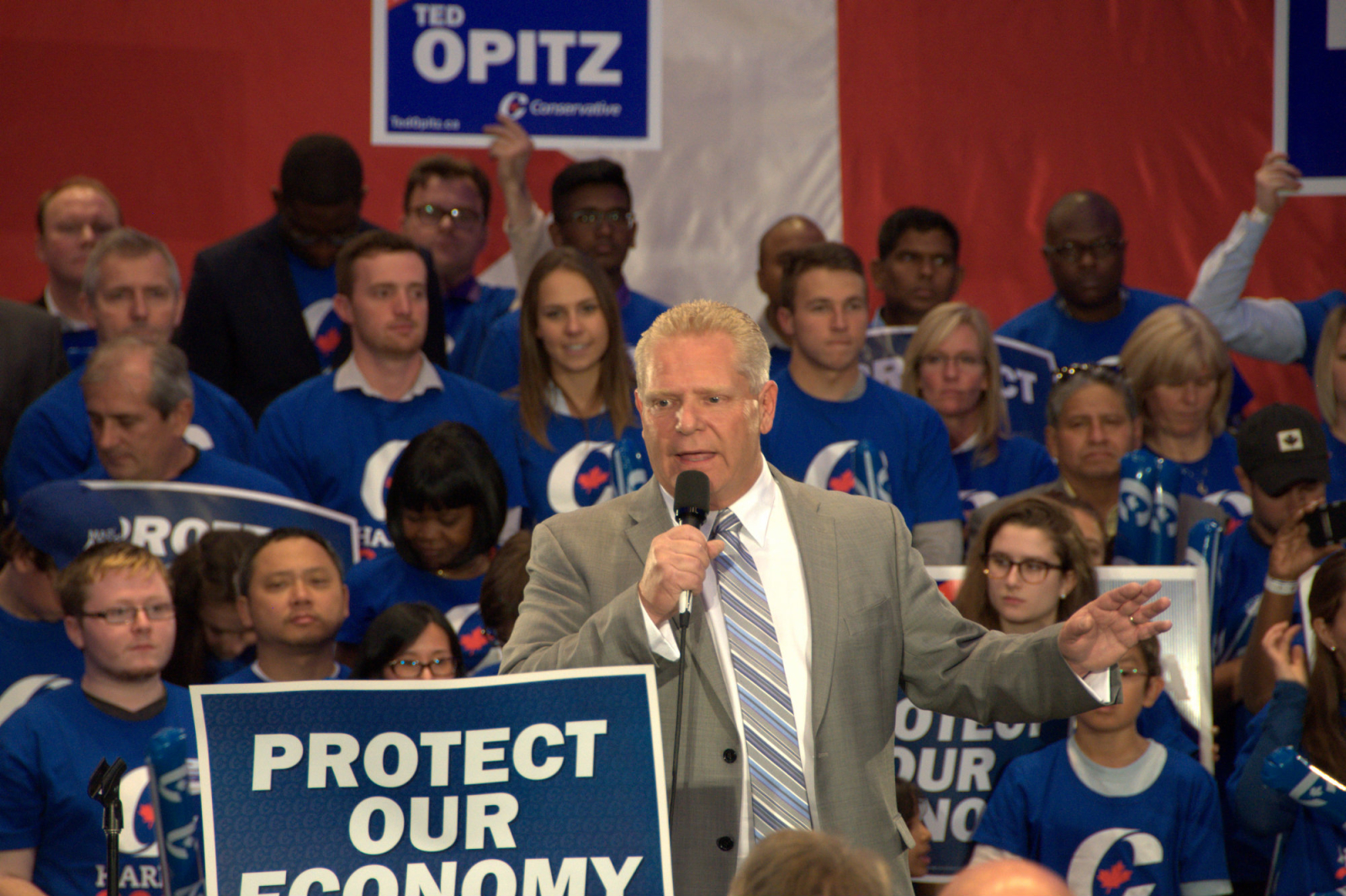 Doug Ford burst onstage to a packed house and unleashed a barn-burning speech in front of ecstatic supporters who hung on his every word, cheering promises of low taxes and strong families and loudly booing any mention of Justin Trudeau at an Oct. 17 rally in Toronto's Congress Centre.

Despite the controversy swirling around both Ford brothers, Ford Nation believed that their leader could make an ideal Prime Minister one day.

“One thing I admire about him is that he fights to save taxpayer dollars. He’s had some issues, he’s had some things to overcome, but bottom line he genuinely wants to save money for the taxpayers,” said Mike Roberts.

His fellow Ford Nation citizen Anastasia Tolias was also enthused by the idea of Doug Ford moving to 24 Sussex Drive.

“I think he should have a try at it,” said Tolias. “He could communicate with all the different types of people from grassroots on the street all the way up to the high tables. He’d listen to them.”

But Conservative MP Bernard Trottier, who represents Etobicoke-Lakeshore, preferred to keep the focus on Stephen Harper’s economic track record, saying “that’s not the decision we’re here to talk about today,” when asked about Doug Ford’s prospects for Canada’s top job.

The former Toronto councillor wasted no time in roasting Trudeau’s Liberals for supposedly huge tax hikes that in his view would reduce families to penury, whipping up his supporters into a frenzy for a re-elected Stephen Harper government, but the Liberals are still leading in national polls and the PM himself appeared slightly desperate when he once again used cash register sound effects to mock the Grits’ economic plans.

“Each family will be affected with a thousand-dollar tax increase right at the bottom line of their paycheck,” said Ford as his audience howled disapproval of the Liberals. “I find it quite ironic his new mentor – his new mentor is Kathleen Wynne - scandal after scandal.”

However, Ford’s own history is not exactly squeaky clean, as the councillor once sold hashish on the streets of 1980s Toronto, according to a Globe and Mail investigation. There is nothing on the public record that shows Doug Ford was ever criminally charged.

His brother Rob, Toronto’s former mayor, has used drugs and previously admitted to smoking crack after months of denials. He too was present at the rally but did not speak.

Indeed, Harper’s own attitude towards the Ford brothers has not always been friendly, having once called the Ford brothers ‘losers’ and steadfastly refused to utter that family’s name as late as this week, when asked why a prime minister touting strict anti-drug laws would choose to associate with Rob Ford in particular

Nonetheless, Harper reversed his previously cool stance on both Doug and Rob to show a united front for Canadians amid his flagging poll numbers, having previously posed for a picture with the Ford family before appearing in front of Ford Nation.

It was Doug Ford who agreed to turn out his supporters in their thousands as part of a last-ditch effort to get the PM re-elected.

Harper reciprocated during his speech by heaping praise on Ford Nation, saying “Friends, let’s begin by thanking all of the constituency associations, the organizers, the volunteers – including the Fords – everybody who helped get this fantastic crowd out tonight.”

The PM’s outwardly bullish speech and confident swagger in front of Ford Nation belies his party’s sagging poll numbers on the eve of the federal election.

At time of writing, CBC’s poll tracker has the Liberals running at 36.3 support, well ahead of the Conservatives’ 31.2 per cent and streets ahead of the NDP’s 22.3 per cent.

As Ford Nation whooped and cheered both Ford and Harper, master troll Michael Dunbar slipped under the radar for a pre-election prank just months after he tricked Doug Ford into posing for a picture with him.

Posing as an ardent Conservative supporter, Dunbar had already tricked Ford into posing for a picture with him last year as he held up a sign bearing the word ‘folks’. Such a ‘common man’ approach is ironic to many, given Ford’s status as a millionaire businessman.

That’s why Dunbar has lampooned both Ford and Harper alike by himself pretending to be an ardent Tory, a spoof technique made famous by British-Jewish comedian Sacha Baron Cohen who played Borat, a crude and anti-Semitic Kazakh reporter who mocked bigots by himself appearing to be one.

“I’ve been a principled Conservative, I’d say, ever since I first heard Doug Ford speak his use of the word ‘folks’, having an almost yogic-like chant and it almost instilled a sense of Nirvana in me,” said Dunbar.

He also admitted having a spiritual connection to Stephen Harper, channeled through the PM’s extensive use of the word ‘friends,’ but it did not feel quite as ecstatic as hearing Doug Ford utter ‘folks’.

“It’s still special but nothing will ever compare to the first high [I felt] when Doug Ford said ‘folks’ for the first time. Nothing gets me higher than that,” said Dunbar.

Unlike some genuine Tories who hedged on the idea of Doug Ford running for PM, Dunbar offered a ringing endorsement to Toronto’s up-and-coming Conservative superstar.

“I would say you have to run for something, it’s going to be really embarrassing for our country if we don’t have someone with Conservative principles running for public office,” said Dunbar.