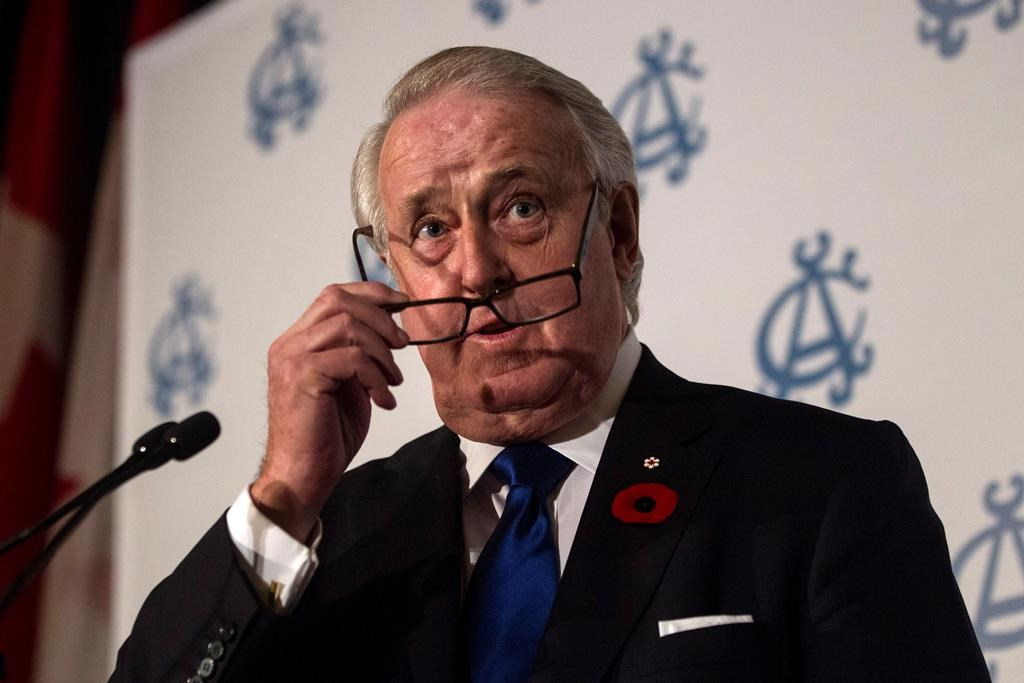 TORONTO — Former prime minister Stephen Harper has a role to play in helping renew a damaged Conservative party so that it can one day return to government, one of his predecessors said Thursday.

In a well-received hour-long speech to the Albany Club, Brian Mulroney said the rebuilding will have to include policies that appeal to a wide spectrum of voters.

"Canada's vibrant democracy is advanced by the collision of great ideas and the articulation of competing visions for our country," Mulroney said.

"It may surprise some but this actually can be done effectively without the politics of personal destruction."

Only if Conservatives band together, he said, will Canadians invite them back into government.

"Change will one day come, but only when Canadians feel that we are worthy of their trust, that we reflect their values, and that we offer them a vision of Canada that is grand, generous and true," he said.

"There should be no ideological impediments to our welcome, no narrowness of view, or vindictiveness of spirit as we review, renew and rebuild."

Mulroney reminded his audience of the Tory party's long, painful climb back to political respectability after its crushing defeat at the hands of the Liberals in 1993 that followed his two terms as prime minister.

Liberals then governed for 13 uninterrupted years.

"I will leave in silence tonight the reasons for those victories and the roles of those who split the Conservative vote down the middle," Mulroney said.

"No more magnificent gift has ever been handed over from one opposing party to another in the long and turbulent political history of Canada."

In the end, he said, people finally came to realize the party had split into two unelectable wings that served only to guarantee successive Liberal victories.

"We do not need to learn this lesson again," he told the crowd of several hundred, who gave him a prolonged, standing ovation.

To change that dynamic, he said, unity was needed and he praised both Harper and Progressive Conservative stalwart Peter MacKay, who introduced him as speaker, for ensuring that happened.

Now as then, the party still needs Harper, who had rendered "important service" to Canada, to help in the rebuilding, he said.

While Harper was frequently criticized for centralizing power and decision-making in his office, Mulroney stressed the importance of a party's caucus as a "microcosm of Canada, replete with challenges and achievements, tensions and dreams."

Harmonizing the differences into coherent national policy, he said, exemplified the "very essence of Parliamentary democracy."

He urged the party to take the time to choose a new leader with care — it chose Rona Ambrose as interim leader Thursday. The party, he said, must articulate a vision and policies with a voice that "eschews harshness" and celebrates the essential goodness of Canadians.

"Our new prime minister is 43 years old, sparkling with promise and passion," Mulroney said. "I know that we, and all Canadians, wish him well."