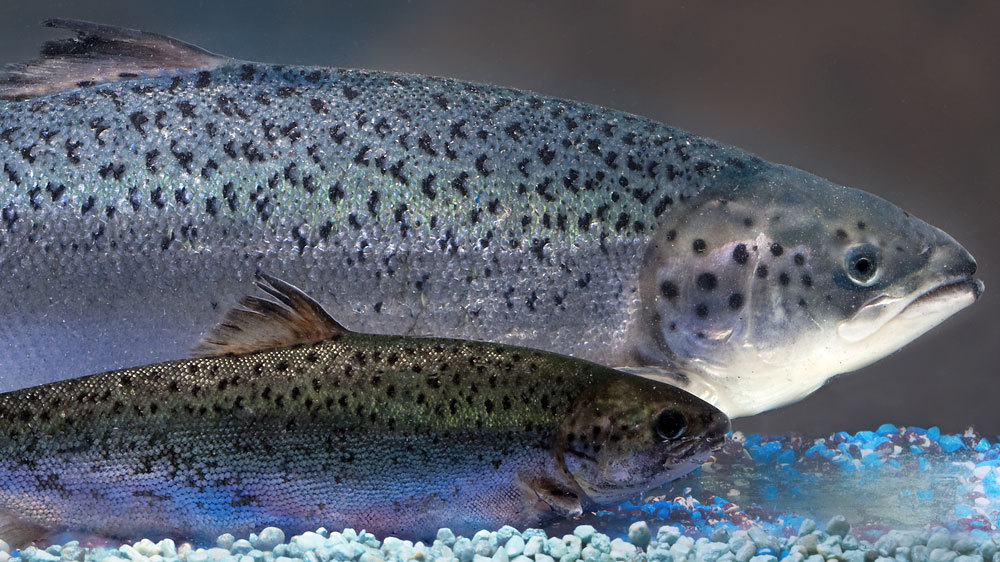 An AquAdvantage salmon behind a non-transgenic Atlantic salmon sibling of the same age. AquaBounty Technologies photo
Previous story
Next story

A court battle over what could be the first approved genetically modified food animal in the world began in Ottawa Tuesday.

The case pits environmental groups against the federal government and a private aquaculture company over a genetically modified salmon called "AquAdvantage."

Lawyers from Ecojustice are representing the two environmental groups. They argue that the federal government acted unlawfully when it approved AquaBounty Canada Inc.’s application to manufacture genetically-modified salmon without sufficient public notice and without adequate assessment for its other uses.

The groups seek a court order overturning the government’s approval. It could be three to six months or more before a decision is made.

“We’re in court today because we believe the government made a couple of substantial errors in approving an application from AquaBounty Technologies to develop an export GM salmon,” Mark Butler, policy director at the EAC in Halifax, told National Observer.

Butler said AquaBounty’s salmon would be the first GM animal in the world for food consumption to gain approval.

“Given that, there should be a serious level of public engagement and participation and transparency around it.”

She said the government concluded, “there were no concerns identified to the environment or to the indirect health of Canadians due to the contained production of these GM fish eggs for export.”

AquAdvantage fish: Chinook salmon with genes of other fish

The AquAdvantage fish is an Atlantic salmon containing the genes of Chinook salmon as well as that of a bottom-dwelling fish called the ocean pout. The particular combination of genetics is designed to make the AquaBounty fish grow faster than conventional salmon, so that they can reach the market faster.

In late 2013, Environment Canada approved the commercial development of AquaBounty’s genetically-modified salmon. AquaBounty intends to produce GM salmon eggs commercially, and then ship them to facilities in Panama, where they’d be raised to adult fish.

If the GM salmon receive approval for human consumption in Canada and the U.S. (which is pending), the company would then ship the fish back to the North American Market.

The Living Oceans Society and the EAC contend that Environment Canada didn’t comply with the Canadian Environmental Protection Act. The act requires all new substances to be assessed for toxicity to the environment.

As well, the two groups are taking the government to the courts over a sufficient lack of public notice around the salmon.

Under the Canadian Environmental Protection act, the government has to provide notices of decisions to the public when exemptions under the act are granted. The EAC, however, learned that Environment Canada failed to publish such a waiver, which they contend denied the public knowledge of the decision over the GM salmon.

“There was an opportunity for the public to be given notice that this approval was being issued,” Butler said, “but the government bungled that and forgot to publish the notice of the waiver.”

The environmentalists also have concerns that should the GM salmon be approved for breeding, they could escape their pens and interbreed with Atlantic salmon.

A revolution in salmon farming

Butler contends that the salmon could enter the wild from human error, from a truck carrying the fish overturning near a river, or from a “Hurricane Juan coming along and blowing the roof off the facility.”

“Once a GM salmon breeds with a wild Atlantic salmon, the genie’s out of the bottle. You can’t clean that up.”

While AquaBounty maintains its GM salmon are sterile, the environment groups argue that up to five per cent are able to breed with wild salmon as well as with trout species.

While it might seem curious that the B.C.-based Living Oceans Society has involved itself in a lawsuit involving Atlantic salmon, the society’s executive director, Karen Wristen, said Atlantic salmon are the main species of farmed salmon being grown in British Columbia net pens.

She believes that if the AquaAdvantage salmon lived up to the claims of AquaBounty, it would create a revolution in salmon farming.

“I’d certainly hate to think we’d be seeing genetically modified salmon enter into facilities on the West Coast as well.”