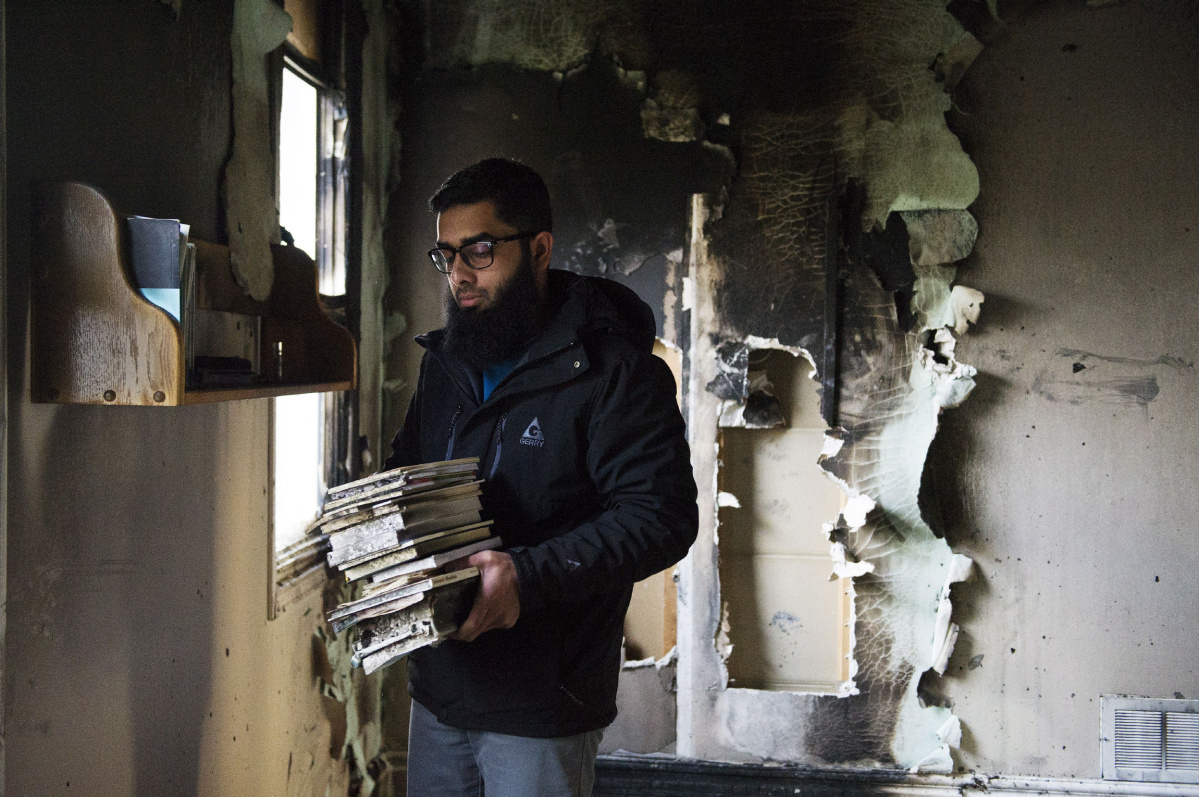 Usama Zahid removes the Qu'ran and other books from a shelf after a Nov. 14 arson attack on a Peterborough, ON, mosque. (Credit: CP).
Previous story
Next story

Muslims across North America are once again facing a spike in bigotry, including a Texas pastor denouncing their faith as “inspired by Satan,” and armed protestors gathering outside a mosque in Dallas.

Trump has called for a compulsory federal database to track all American Muslims and has even proposed making them carry special identification, an idea that some have compared with the Third Reich’s efforts to single out Jews some 80 years ago.

“Certain things will be done that we never thought would happen in this country, in terms of information and learning about the enemy,” said Trump.

Nihad Awad, who heads the Council on American-Islamic Relations, described Trump’s statements as “beyond terrifying.”

“We are talking about America in the 21st-century potentially about to be led by dangerous people,” said Awad.

Meanwhile the fear continues to spread: a group of six Muslim travellers were prevented from boarding a Southwest Airlines flight from Chicago to Houston by other passengers, causing them to be rebooked.

In another incident involving Southwest Airlines, two Palestinian Americans were barred from a flight at Philadelphia Airport after a fellow passenger overheard them speaking Arabic and demanded that the gate agent stop them from boarding. Both men were later allowed onto the plane after being questioned by authorities.

In a statement, Southwest said that, “Safety is our primary focus, and our employees are trained to make decisions to ensure that safety, and to safeguard the security of our crews and customers on every flight.”

Bigotry is also ramping up north of the border, despite the new Liberal government’s more welcoming stance towards Islam. Just one day after the Paris attacks, a mosque in the Ontario town of Peterborough was targeted by arsonists whose fire caused an estimated $80,000 worth of damage in a suspected hate crime.

Local people have since rallied around Peterborough’s Muslims by launching a crowdfunding campaign to fix the damage.

Across the country, the Al Madinah Calgary Islamic Assembly was broken into and donation boxes and a computer were stolen, after thieves smashed three doors to get inside. While not necessarily a hate crime, Imam Syed Sohrawardy told the Calgary Herald that it was still unnerving.

He said that after the Paris attacks, Muslims had told him that others told them to “go back home.”

“We should send a message … that hate against Muslims should be seen as a terrorism as well,” said Sohrawardy as quoted by the Calgary Herald.

However, Muslims in Canada have been feeling the chill even before Paris was attacked, having weathered a contentious election row over the wearing of niqabs at citizenship ceremonies earlier this fall.

Triggered by the former Conservative government in the last weeks of its floundering election campaign, the niqab controversy may have caused a spate of Islamophobic attacks. This included a street assault on a Montreal women who had her scarf ripped off by two assailants, an attack that left her fallen on the ground.

Arguably, Canadian Muslims have been under pressure since the Ottawa shootings in October last year, which left Canadian soldier Nathan Cirillo dead after he tried to stop a terrorist from attacking Parliament.

Days later, a mosque in the small Alberta town of Cold Lake was defaced by vandals who spray-painted the words “Go home” on its walls and also smashed windows. Volunteers later helped their Muslim neighbours clean up the damage.

Even before ex-PM Harper dropped the election writ on Aug. 2, the hate got personal for Toronto-area teacher Sajida Kutty.

Her mother was lined up at the checkout till in a supermarket when a man behind her muttered the words, “Terrorist. Terrorist, go away.”

According to Kutty, other people could hear the man abuse her mother but no-one said anything nor tried intervening. The man continued to inch closer and closer to her mother as he kept on intimidating her.

“He was very angry and agitated,” Kutty told National Observer.

But that wasn't all. When her sister was browsing the gift shop at Toronto’s aquarium, she spotted another woman stealing sweets from a candy dispenser and told the thief she had to pay for them.

“You’re a terrorist. Why do you care?” was the shoplifter’s response.