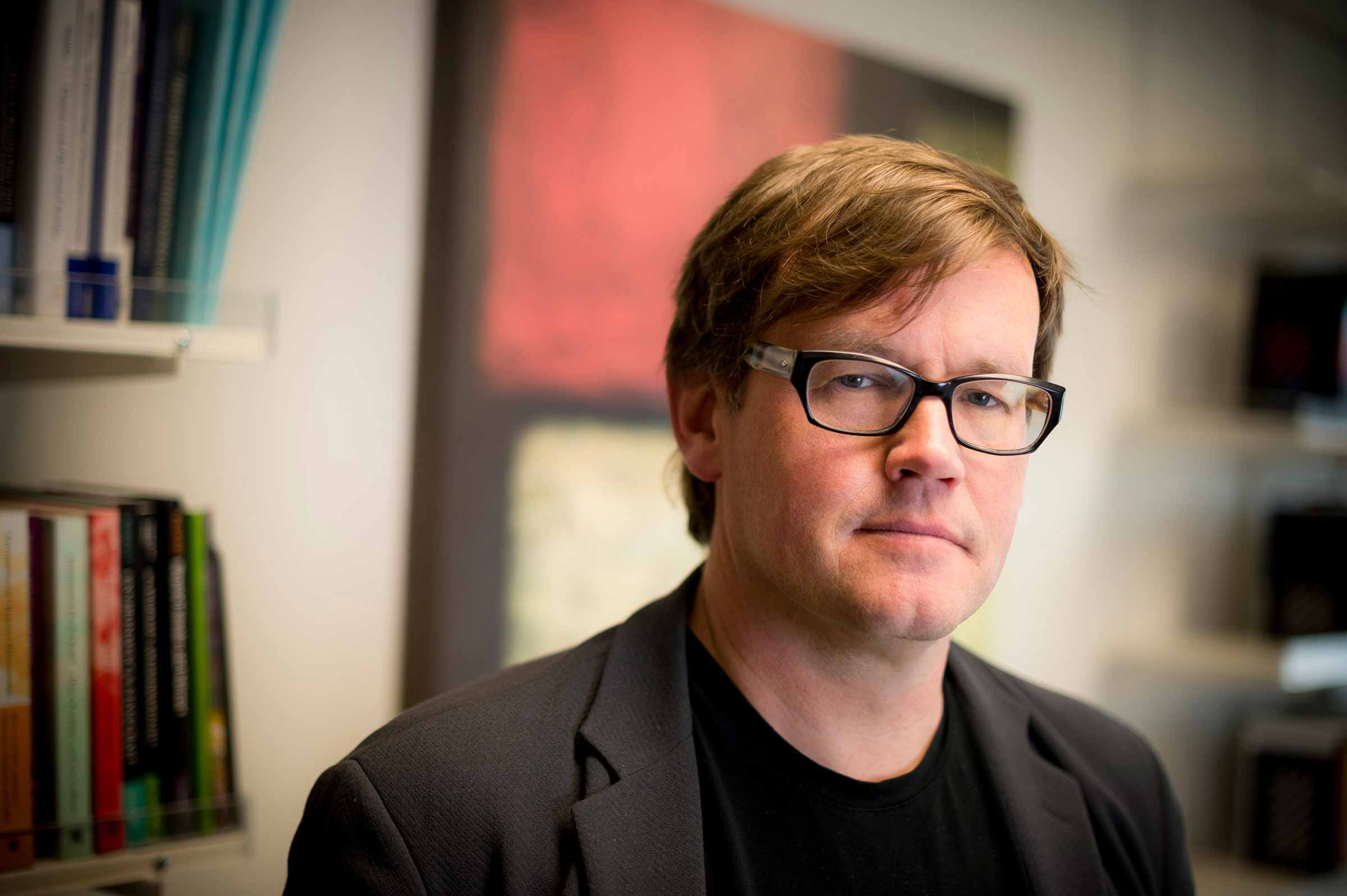 David Victor sat in the departures lounge of San Diego International Airport in early December, waiting for his flight to Paris. It marked the first time in two decades that Victor planned to attend a climate change negotiation.

“I stopped going to these annual meetings in 1996,” the scientist and academic said, “because they struck me as an obvious waste of time because they weren’t going to produce anything different.”

But Victor believes the negotiating strategy is more flexible in Paris than in previous summits and will result in tangible pledges to lower emissions from countries along with reviews of those goals.

One thing Paris likely won’t achieve is the much-vaunted agreement to prevent two degrees Celsius of global warming, Victor says. In fact, the goal annoys him.

Victor knows a few things about climate change and international negotiations. A professor of international relations and director of the Laboratory on International Law and Regulation at UC San Diego, his book Global Warming Gridlock explained why the world hasn’t made much diplomatic progress on climate change.

Over 150 world leaders and hundreds of delegates have gathered before thousands of scientists, activists and environmentalists in Paris to try hammer out a historic, new agreement on reducing greenhouse gas emissions.

The big question is, if Paris doesn’t meet its two degree Celsius ceiling, what’s next?

Canada ambitiously reaches to push limits down to 1.5 degrees Celsius

“Personally, I think this whole two degree thing has just become a severe disservice,” he told National Observer, “because people are laying out standards for success that are not achievable, so they’re setting up a process to have a lot of people make claims about Paris failing.”

Victor believes the negotiations will deliver an important set of accomplishments, including funding for countries to help fulfill their missions. Yet people will be running around saying Paris was too little, too late because it’s not meeting an achievable goal, he says.

“I think this whole two degree discussion is now no longer just kind of a sideshow, but it’s actually getting in the way of serious progress.”

That said, Canada has said it will be even more ambitious and will pursue a goal of limiting global warming to a rise of 1.5 degrees. Environment and Climate Change Minister, Catherine McKenna, shocked the room full of officials with the announcement Sunday night, telling them: "We want to send a strong political signal."

In late November science reporter Jeff Tollefson published a piece in Nature asking if the two degree world is a fantasy. Tollefson wrote that the two degree Celsius scenarios seem "so optimistic and detached from current political realities that they verge on the farcical."

“Although the caveats and uncertainties are all spelled out in the scientific literature, there is concern that the two degree Celsius modeling effort has distorted the political debate by obscuring the scale of the challenge.”

According to Tollefson, the idea of limiting global warming to two degrees Celsius dates back to 1975. Back then an economist at Yale University, William Nordhaus, proposed that more than two to three degrees of warming would push the planet outside the temperature range of the past several hundred years.

If the world warms two degrees, the consequence is that rise will then accelerate warming to three or four degrees, leading to the extermination of species and coral reef ecosystems, climate extremes and myriad human health, ecological and environmental problems.

Even two degrees of warming could endanger coastal cities and low-lying areas such as Bangladesh, the European lowlands, and large portions of the U.S. eastern coast from sea level rise, a warning sounded by renowned former NASA chief climatologist James Hansen back in July.

“People, for the most part, are not yet facing the reality that we need new goals and no politician wants to be the first person to stand up in front of everybody else and say, ‘You know, guys we’re engaging in a fantasy world. We’re engaging in the fantasy of pretending two degrees Celsius is feasible. We need to look at alternatives,’” Victor says.

If Paris isn't going to meet its goals, then the questions becomes whether countries should mitigate or adapt. Opinion is divided on that.

Violent conflicts are the product of climate change

Blair Feltmate is the head of the Intact Centre on Climate Adaptation at the University of Waterloo in Ontario. Feltmate believes mitigation efforts should be pursued to the greatest degree to which they may be practically achieved.

But at the same time he says the focus has disproportionately been on the mitigation of greenhouse gases and that adaptation to climate change has been “a very weak cousin to that effort.”

According to Feltmate, countries globally should identify what their key vulnerabilities to climate change are and figure out what needs to be done to adapt, to reduce the risks they face. He contends that is currently not being done and suggests that a combination of some branches of the United Nations could lead the effort along with the International Chamber of Commerce.

Why the latter body? Feltmate suggests the problem is as much economic as anything else. He’s not alone in that view. In late September, Mark Carney, the Governor of the Bank of England, delivered a speech in which he said climate change would threaten financial resilience and long-term prosperity if left unchecked.

Globally, Feltmate opines that population control and family planning should be embraced. Violent conflicts continue to break out around the globe as people fight over limited resources, which are the product of climate change and a growing world population.

“What people don’t seem to be paying attention to is between now and 2030 or 2035 we’re going to have another 1.5 billion new people on the planet,” Feltmate says.

“The key factor that’s missing in the equation, in adaptation, is urgency,” Feltmate declares. “Every single day we don’t adapt is a day we don’t have. I find more often than not, people think we have the luxury of time to embrace adaptation to climate change, but the reality is the extreme weather is here now.”

No longer a question of whether we should adapt, but how we must do so

Alain Bourque is the executive director of Ouranos, the Consortium on Regional Climatology and Adaptation to Climate Change based in Montreal.

Bourque contends that mitigation is well and fine, but he notes that people think that a reduction in greenhouse gases will stop all of the impact of climate change that’s begun globally. He says that’s not the case. “There’s still going to be increasing impact even if we significantly reduce greenhouse gases, because reducing greenhouse gases is really all about avoiding much worse.”

How serious could it get? Consider Quebec, which former U.S. vice-president Al Gore just praised for their newly announced initiative of $25.5 million over five years to help developing countries fight climate change.

In its 2015 report, Ouranos predicts, among other things, a 30 to 75 centimetre sea level rise in the Gulf of St. Lawrence over the coming century. Urban heat islands will contribute to higher mortality rates as well more intense atmospheric pollution from forest fires.

The report warns that buildings and infrastructure are vulnerable to the impact of climate change, ranging from coastal erosion and flooding to road surface deterioration.

“It is no longer a question of whether we should adapt, but how we must do so,” notes the report.​

In its Road to Paris series of articles, the International Council for Science cites adaptation measures such as water conservation, flood defense, dike construction, the development of drought-tolerant crops, the creation of land corridors for species migration and even the abandonment of settlements in favour of inland locales.

But the council notes, “There is a restless, almost climate-sceptic, bent to the pro-adaption argument…in which fossil-fuel companies and industry are let off the hook, and the pressure to reduce emissions is eased.”

Catherine Potvin, the Canada Research Chair on Climate Change Mitigation and Tropical Forests at Montreal’s McGill University, says she would never say that adaption should the order of the day. “We are the 10th largest emitter in the world,” Potvin says of Canada. “We have a responsibility to mitigate.”

According to Potvin, we have the time and technology to reduce greenhouse gases. She cites the statistic that it takes on average 40 years to transition from one major power source to another. Work on renewables has been underway for 20 years, Potvin says, pointing out that society should be able to easily transition to solar, wind and other renewable energy sources before the 35-year deadline runs out.

Elon Musk, the innovator behind the electric car company Tesla, clearly comes down on the side of mitigation. In Paris, Musk called for a carbon tax that would be revenue neutral (heavily taxing carbon, and reducing other tax burdens in its place) and phased in over a period of years, Fortune online reported.

In a speech, Musk encouraged his audience to talk to their politicians at every opportunity and ask them to put a carbon tax in place. The entrepreneur told them to “fight the propaganda from the carbon industry,” according to Fortune, and was adamant that only a carbon tax would speed the transition from carbon-producing fossil fuels to sustainable energy, the magazine reported.

Lou Leonard, vice president of the climate change program for the U.S. World Wildlife Fund, took some time from observing the Paris negotiations to speak with National Observer. On the phone from the old air field just outside of Paris, Le Bourget – where the United Nations delegates are hashing out the details of the new climate change agreement – Leonard said it’s not a case of “either-or” when it comes to mitigation and adaptation.

He quoted John Holdren, U.S. President Barack Obama’s director of science and technology policy, who said in response to climate change three things can be done: mitigate, adapt or suffer. “The more you mitigate, the more you adapt, the less you suffer,” Leonard said.

Leonard posits that turning up mitigation will reduce the need to invest as much in adaptation in the long run and will reduce suffering. “But in the near term, we have to do both adaptation and mitigation with as much ambition and urgency as we can. It’s not either-or.

“It can’t be, because if we stop mitigating and saying climate change is already here, we put all our efforts into adaptation. Then we will get to the point where there are impacts we cannot adapt to and that’s when the suffering becomes something that we can’t avoid.”

Back at San Diego International Airport, Victor proposes that a series of indices should replace the two-degree goal. He gives the example of the Millennium Development Goals the United Nations set up in 2000. They set out eight goals and within those 21 targets and 60 detailed indicators.

While the countries fell short of meeting their goals, Victor says a lot of evidence exists that the goals and their indicators helped them focus on what actually needed to happen to make progress.

He suggests designing the same sort of system. The goals would focus on things such as human impacts on the climate system, on severe and extreme weather events coming out of the climate system, and adaptations to those. Instead of a single number, such as two or three degrees, a basket of indicators, which would be measurable and practical, would be created.

Victor says some have criticized the idea for being more complex than a single number, but he notes that any good-sized problem isn’t managed by a single variable.

“Pilots don’t fly a plane just looking at air speed or the altimeter. Millennium Development Goals weren’t just focused on a single development goal. There were a bunch of them,” Victor says, just before stepping onto the jet that will take him to Paris.