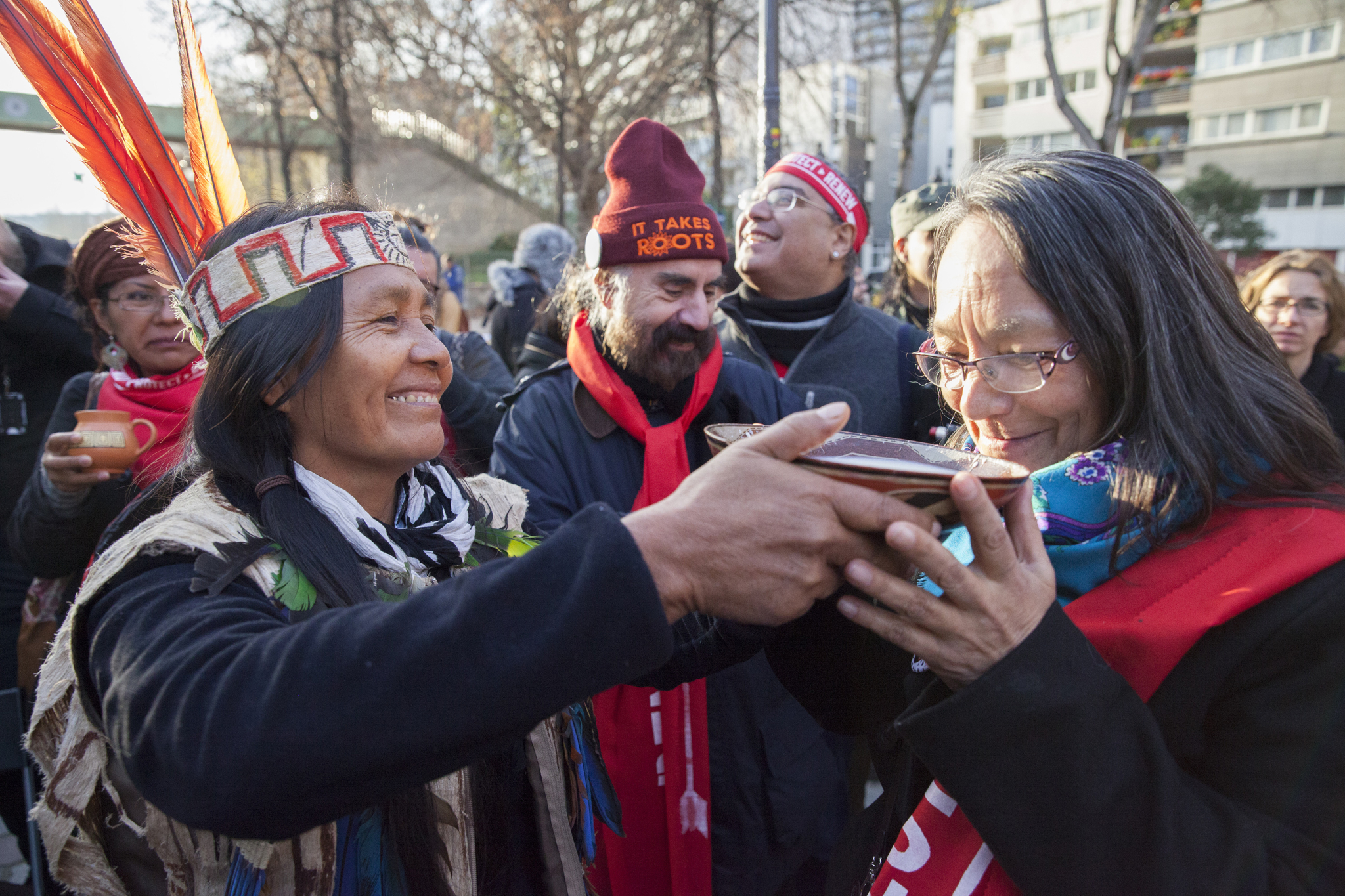 Canadian Indigenous actress Tantoo Cardinal gets a taste of a root drink from an Indigenous woman from Ecuador at climate rally in downtown Paris on Sunday. Photo by Mychaylo Prystupa.
Previous story
Next story

The Canadian government is fighting for the inclusion of Indigenous rights in the Paris climate accord against the resistance of U.S. and European Union powers, according to several sources.

The news came as Indigenous peoples from the Arctic to the Amazon launched a flotilla of kayaks in downtown Paris on Sunday to paddle their point to "keep fossil fuels in the ground" and to urge state governments to respect their collective Indigenous rights.

The Trudeau government, said a prominent a First Nations leader, is acting with great leadership— and in sharp contrast to the previous Harper regime and other wealthy countries now.

"Canada has taken a very supportive role in Paris which is absolutely welcome given where we have been over the last decade on this issue. The only recourse we have had is to the courts," wrote Grand Chief Edward John with the First Nations Summit on Monday.

The Global Indigenous Caucus, he said, wants the Paris climate agreement to "ensure that impacts from climate change on Indigenous Peoples are recognized and that measures are taken to provide for mitigation and adaptation from the impacts."

"For example we see dramatic climate changes in Canada’s Arctic impacting the Inuit," said Grand Chief John. "In the Pacific Indigenous peoples are losing the very islands which are their homes. In B.C. we have seen the devastation caused by the mountain pine beetle. We see warming waters which become lethal to migrating salmon. There are many developments globally and impacts are now, and they are real."

Currently, the inclusion of Indigenous rights in the climate agreement was “annexed” from the operative text —the part that has legal force —by the European Union and the United States over climate liability concerns.

“They drew a red line in the text stating it has to be there and it’s not negotiable. It means that Canada is against the EU which is blocking the issue of the collective rights of Indigenous peoples,” she said from the downtown Paris flotilla event, that drew hundreds of people.

On Friday, Prime Minister Trudeau said in a statement:

“I have instructed Canada’s chief negotiator for climate change and her team to strongly advocate for the inclusion in the Paris Agreement of language that reflects the importance of respecting the rights of Indigenous Peoples. We have also highlighted the importance of considering Indigenous traditional knowledge alongside scientific analysis.”

Green leader Elizabeth May, a lawyer with more than decade of climate negotiation experience, said not to expect that the inclusion of these rights will help Aboriginal battles against Energy East or Kinder Morgan.

"I don't see any direct legal benefit for our Canadian pipeline battles. The United Nations Declaration on the Rights of Indigenous Peoples does more and Trudeau has called for respecting it,” she said Monday.

"Sarayaku is a community that won a case against the Ecuadorian government because the government sent out military with an oil company to try to get oil out of this area of our territory."

He said Indigenous peoples are often on the front lines of climate change. "A lot of things have changed in our community —the agricultural cycles, we have river floods, we have no animals anymore to hunt. Everything has changed. We didn't know why. But now we see that the whole climate in the world is changing."

Climate organizer and Indigenous activist Clayton Thomas-Muller of 350.org said the legal push to include Indigenous rights in the Paris deal will help block the controversial use of so-called "REDD+" carbon credits by big resource corporations.

"[It] will add further legal weight on Canada in how it meets it climate commitments by ensuring that it does not have a financial mechanism like forest offsets in the global south to launder its climate pollution from the north, justifying expansion of developments like tar sands."