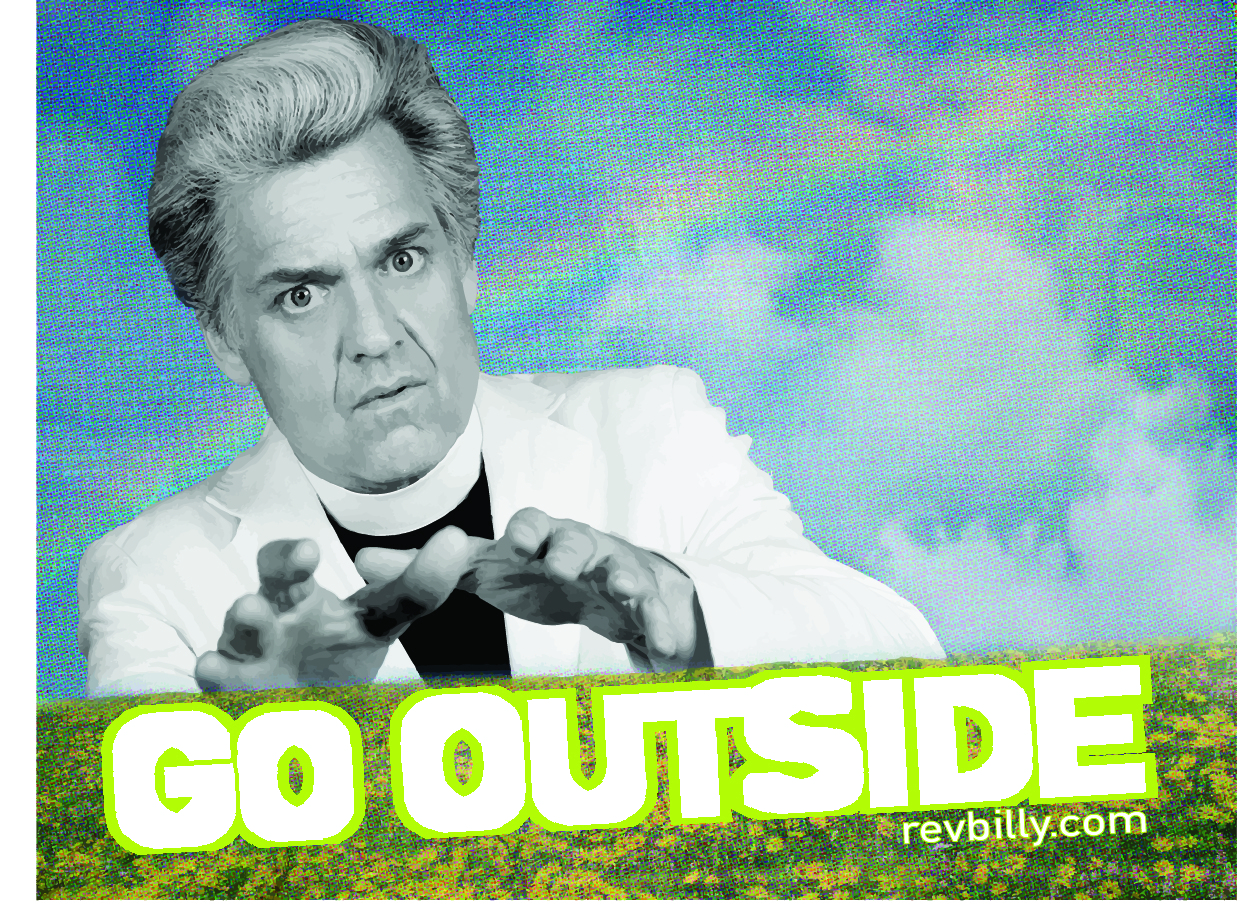 Reverend Billy sticker with his advice for living green: "Go Outside"
Previous story

In December global leaders met in Paris to hammer out an agreement to try and hold global warming to a 1.5 Celsius degree rise in temperature. But while we hold our elected officials responsible for greenhouse gas emission reductions, what can we and what do we do ourselves to contribute to that goal? National Observer asked a number of experts for tips on how you can reduce your personal carbon footprint.

According to Mathis Wackernagel, founder and CEO of the Global Footprint Network, reducing our personal carbon footprint is a necessity in order to prepare for the future. “The future will be fossil fuel-free,” he declares. “It’s just a question of how far out, and if we choose to be wise and do it faster to save more of our bio-capacity.”

Wackernagel asks how do you shift your personal investments — your investment in your family, lifestyle, home and so forth — to become carbon neutral by 2050?

Emma Norton, the energy efficiency coordinator at the Ecology Action Centre in Halifax, Nova Scotia, says she thinks carefully about every purchase she makes and whether or not it’s absolutely necessary.

“Just buying unnecessarily is something that people should really think about cutting back on,” she advocates.

Carbonfund.org recommends reducing, reusing and recycling as manufacturing produces an average of four to eight pounds of CO2 for every pound of manufactured product.

And buying local doesn't just help the local economy; it cuts down on waste: a five-pound package shipped by air across the country creates 12 pounds of CO2.

Alexander Ochs, senior director of climate and energy for Worldwatch Institute, questions the ideal of the typical North American, two-garage home with a large lawn.

“Is it really worth the two hours commute you do every day to get to your workplace?” he rhetorically asks.

He suggests considering moving back into the city and embracing the density of urban life, living in an apartment over a house. You might have to exchange the lawn in front of your house for a small porch, a balcony, or even a public park, but Ochs argues you’d end up with more time to spend on yourself and with your loved ones.

"It might reduce the carbon footprint of your house, because you’re living on top of each other and you’re warming each other in an apartment building,” he says. “It saves a lot of money and a lot of time and might actually improve peoples’ lives.”

Cars are notorious emitters of greenhouse gases. Transportation produces about a quarter of Canada’s greenhouse gas emissions, with roughly half of that coming from personal vehicles.

When it comes to cars, if possible it’s best not to own just one (rather than having a car for each adult member of the household) and live centrally, making use of public transportation, or bicycling or walking.

“I find the best way not to use my car is to not to have one,” says Ottawa’s Saul. He uses a car-sharing program and if he wants to get out of town for the weekend he rents one at a fraction of the cost it would take to buy his own car.

Like Saul, Halifax’s Norton doesn’t own a car. She lives in the city core, walks and bikes everywhere and uses a car share when she needs a vehicle.

But it’s not just urbanites who can cut back on their vehicle use. Ochs calls the daily commute one of the biggest ways to waste precious time, just driving a car every day along the same route.

“You’re not seeing anything new there,” he says. “You’re probably getting increasingly angry in the traffic jam.”

Instead, if public transit is available, Ochs suggests using it. Riding transit offers great opportunities to make the best use of time, according to Ochs, who says you can read a book, watch a movie, play chess, or learn a new language during the commute.

Carbonfund.org offers the following tips when it comes to your car:

Drive better - Studies have shown up to 30% of the difference in miles per gallon (MPG) is due to driving habits alone. You could save more than a ton of CO2 per year by:
- Accelerating slowly and smoothly
- Driving the speed limit
- Maintaining a steady speed
- Anticipating your stops and starts

Maintenance - Keep your car tuned up and running efficiently.

More Maintenance - Replace your air, oil and fuel filters according to schedule.

Tires - Keep your tires properly inflated (just this can save 400-700 pounds of CO2 per year).

When it comes to the long haul, both Norton and Saul recommend bus or train over planes where possible. Norton says a train compared to a plane reduces your energy consumption by a full 90 per cent. If you do have to fly, try to book a direct flight instead of a connecting flight to cut down on fuel emissions.

The ways in which you can ramp up the energy efficiency in your home are myriad. Everyone National Observer spoke to mentioned:

That’s a start and within everyone’s reach and are easy fixes. But John Wilson’s house in northern Ontario, about an hour away from Toronto near Orangeville, may represent the future of homes.

Wilson, the vice-president of operations for the green energy company, Bullfrog Power, decided in the late 1990s that he was going to build an off-grid home that didn’t use any fossil fuels whatsoever.

The result is a 3,000 square foot house made with straw bale insulation, passive solar heating. a green roof and no furnace. The windows are fibreglass frames consisting of two panes with argon gas in-between to increase insulation.

A full 70 per cent of the home’s windows face south to take advantage of the sun, with the house rising to two stories on the south side, and only to one level on the north with a thick straw bale wall on that side of the home for insulation.

Wilson built the eco-home between 2000 and 2001 to show that you gain as much as a 90 per cent reduction in energy by using twice the amount of insulation the building code currently recommends and by employing sustainable building materials.

“Natural materials that are super-insulating have been used for hundreds of years, so that’s a pretty smart way to go,” Wilson notes.

Now he drives around and looks at homes and comments that their street orientation makes no sense. Rather, houses should be built according to where the sun falls with windows positioned toward it.

“We’ve built up an infrastructure that doesn’t really think about it, but if you do, you can get rid of your furnace by super-insulating and using ancient, passive solar techniques.”

Wilson’s house includes three large solar thermal panels to provide hot water heating for showers and baths as well as for in-floor heating; and a large awning on the south face of the home composed of more than 30 solar photovoltaic panels can generate more than 6.2 kilowatts of electricity.

While today many of the features on Wilson’s home might not seem so radical, 15 years ago he was pioneering the idea of an eco-home.

“We, as a family, decided to go really big,” Wilson says. “I also realized somebody had to go first.”

Wilson doesn’t expect everyone to suddenly drop everything and build a similar home, but he says people can think about the principles applied in his house when they’re renovating: lots of insulation on the north side, and high quality windows on the south, for instance.

Both Norton and Saul say shop local and cut back on meat. The New Scientist reported in 2014 that going vegetarian could cut your carbon footprint by more than half. Saul says: “I don’t think there’s any question that certain kinds of food are more resource-intensive — and that would include fossil fuel intensive than others — so that would include cutting back on or eliminating meat from your diet.”

While neither mentioned beverages, the carbon footprint of tea or coffee without milk is more eco-friendly than, say, a cappuccino or latte. According to a report in The Guardian, drinking three lattes a day for a year is the equivalent of a short airplane flight.

Ochs goes even further and suggests you start growing your own food. He points out most people only consider that an option if they live outside the city on a large property, but Ochs insists that’s not the case.

“It can be healthier, reduces the environmental footprint. It makes you quite proud you raised and harvested those tomatoes by yourself.”

Another way to reduce your carbon footprint with food is to ensure that you don’t waste much. Norton says when you buy food, ask yourself if you can eat all of it. Wasted food, if not composted, ends up in a landfill and produces methane emissions, which have 25 times more climate impact than CO2 over a 100 year period.

Carbon offsets occur when you or your organization are responsible for an amount of greenhouse gas emissions, but make investments that remove that equivalent volume from the atmosphere, according to Vancouver-based Offsetters, a company that provides carbon management solutions.

Offsetters, for example, invests your money into a wide range of projects globally. These range from the installation of eight turbines in India’s Gurjurat province, to the protection of trees and reduction of harvest levels in the Great Bear Forest in British Columbia.

The latter not only increases carbon stocks through the protection of the forest, but cuts down on emissions caused by harvesting, road building and other forestry operations.

Let's get busy, the waters are rising.