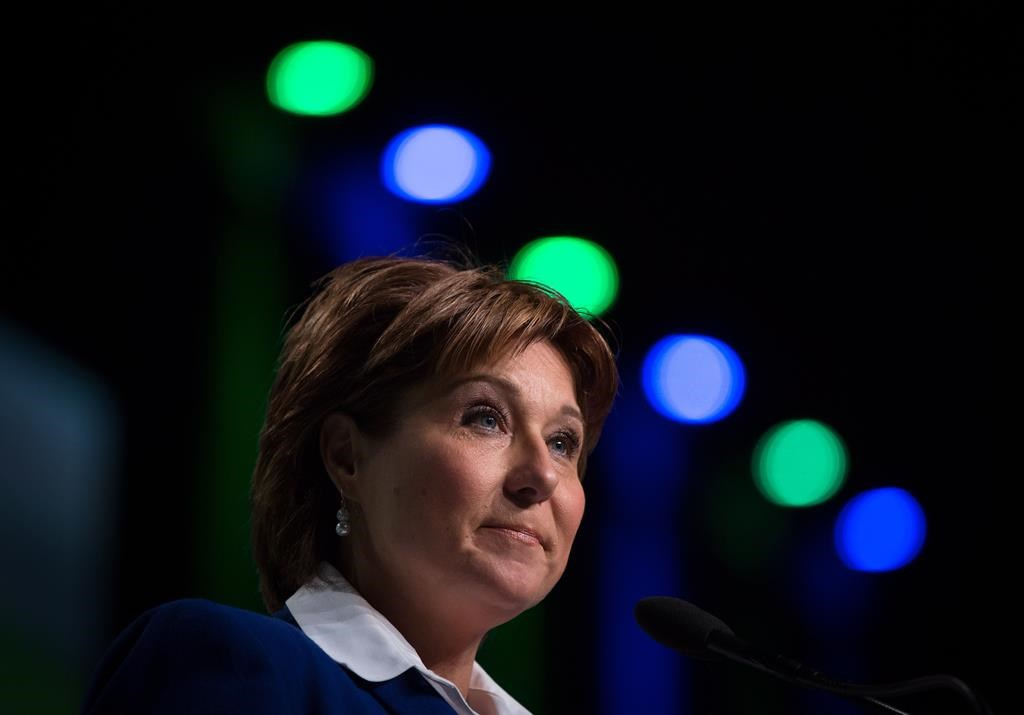 In a final written submission to the National Energy Board (NEB) on Monday, the provincial government announced it would not support the hotly-debated proposal based on Kinder Morgan’s failure to prove it would meet stringent "world leading" oil spill safety requirements.

"I haven’t heard anybody argue that we shouldn’t be holding that bar up," B.C. Environment Minister Mary Polak told reporters during a press conference Monday morning. "We haven’t seen the evidence presented in these hearings that would convince us of that."

If approved, the Trans Mountain expansion project would add 980 kilometres of brand new pipeline to a system that already transports 300,000 barrels per day of crude oil and refined petroleum from the oil sands in Alberta to refineries and marketing terminals in Vancouver and Washington State.

In 2012, the province established five environmental, economic, and legal requirements that had to be met in order for it to consider heavy-oil pipeline projects like the Trans Mountain expansion. These included sound recommendation from the NEB review panel, a fair share of fiscal and economic benefits for B.C. and Indigenous people, and world-leading marine oil spill response, prevention and recovery systems.

During the course of the NEB review of the expansion however, the province determined that the Texas-based Kinder Morgan had not provided sufficient information to determine it would meet those oil spill safety standards.

"This is about the test that they need to meet and we think world-leading response in both those areas in an appropriate test," Polak explained. "We believe that right now, all land base spills preparedness and response is not sufficient in British Columbia."

Polak said her ministry remains in discussion with Kinder Morgan about the Trans Mountain expansion, which could still move ahead with approval from the NEB and cabinet. If given the green light, the $5.4-billion project would increase the pipeline’s carrying capacity to 890,000 barrels per day, generate at least 4,500 construction jobs at peak employment, and $23.7 billion in additional taxes and royalties for provincial and federal governments.

"[But] that’s way, way down the road," the environment minister added. "We would have to see evidence that all five conditions are met… There are not timelines in place.

"We simply have a responsibility to ensure that whatever company is approaching British Columbia with a project like this that they well understand what the bar is and that we would ensure that they would meet those standards."

Pending its approval, the company hoped to complete the project in 2019.

Despite the province's firm stance, Kinder Morgan is confident that through ongoing discussion with the Ministry of Environment, it will be able to meet B.C.'s five requirements by the time the NEB's regulatory process is complete. The oil giant also said it will meet 150 draft conditions set by the NEB itself, which is scheduled to hear oral summary arguments from the project's intervenors later this month.

"The province’s five conditions include several requirements that Trans Mountain alone cannot satisfy," said a Kinder Morgan media statement issued Monday afternoon. "The conditions related to world-leading marine oil spill response, recovery and prevention, addressing Aboriginal treaty rights and BC receiving its 'fair share' are all conditions that require multiple parties to come to the table and work together.

"If approved by the NEB, Trans Mountain is confident that the construction and long-term operation of the project will be done to the highest standards of environmental performance, support Aboriginal communities and provide lasting benefits for British Columbians, Albertans and Canadians."

Depsite Kinder Morgan's confidence that the project will proceed, environmental organizations met the news of its rejection in B.C. with even more confidence that it will not. Toronto-based advocacy group Environmental Defence congratulated the provincial government on putting the "best interests of its citizens ahead of the interests of the oil industry," and called on the Trudeau administration to follow suit.

"Massive new tar sands export pipelines and tanker projects like Kinder Morgan and Energy East are just not worth the risks to our communities and our environment," said the organization's climate and energy program manager Adam Scott. "Without public support or the support of the B.C. government, the federal government has no choice but to reject this project."

Both Greenpeace and ForestEthics echoed this assurance, citing the oil giant's disastrous safety record and the dangers of an oil spill as sufficient reason to shut down the project for good.

The Trans Mountain pipeline expansion has been met with controversy since its proposal and is the current subject of a First Nations lawsuit against the NEB. Last October, the North Vancouver Tsleil-Waututh Nation went to federal court with concerns that it had not been adequately consulted by the Harper government when the NEB review of the project started.

Like many environmental organizations, the Indigenous nation vehemently opposes the project and said B.C.’s opposition will only strengthen its ongoing court case.

"We'll do what it takes to stop it, our people are behind this, we’ve invested so much," said Tsleil-Waututh spokesperson Rueben George. "That’s what we have to say loud and clear, and I think that was said today by the province stepping up and saying 'no.'"

In November 2014, more than 100 citizens, including members of the Tsleil-Waututh Nation, were arrested during protests against the project on Burnaby Mountain, near Vancouver.