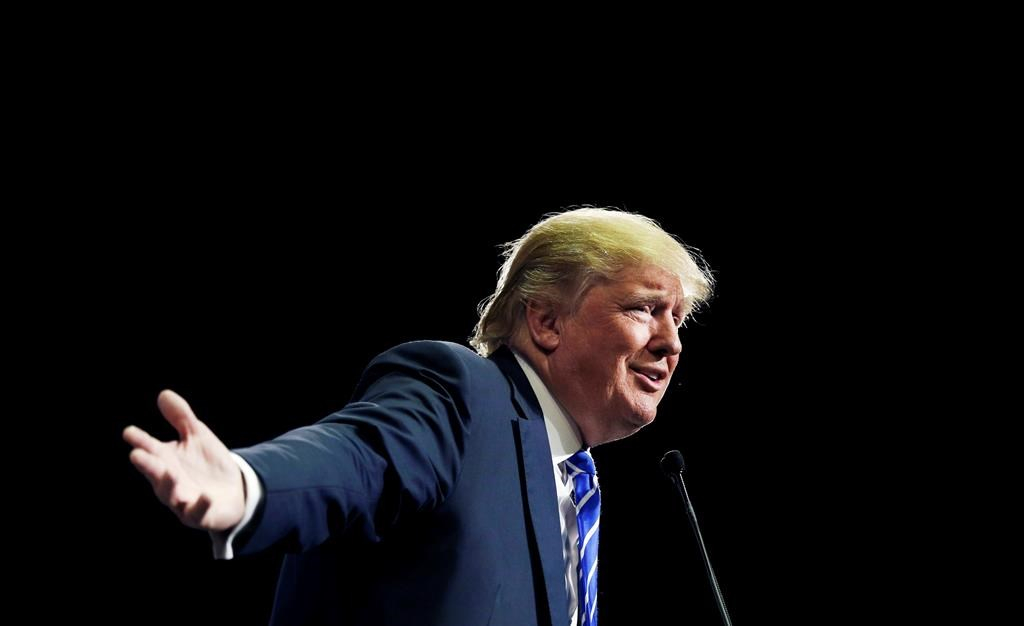 A Leadnow petition calls for a lifetime ban to prevent Trump - whom Spy Magazine once famously characterized as a “short-fingered vulgarian” - from entering Canada.

After his shocking remarks over Muslims in early December, the move to ban the Donald is on in earnest, with the Leadnow petition calling Donald Trump’s comments “jaw-dropping and incredibly dangerous.”

England’s Parliament Monday debated whether they should ban Republican presidential candidate Donald Trump from the country, while in Canada at least three petitions call for a similar ban.

“Trump's proposed policy is something you'd expect to find on the comments section of an ultra-right wing conspiracy site. Coming from an American presidential nominee, this level of xenophobia and hatred is nothing short of jaw dropping and incredibly dangerous,” states the Leadnow petition.

“We've already seen increased violence against Muslims in Canada as a result of the anti-Muslim hatred and fear stirred up by former Prime Minister Harper during his desperate re-election campaign. Trump's comments and fear mongering risk inciting widespread religious hatred and have no place in Canada. Ever.”

In early December, Trump demanded the banishment of all Muslims from American soil. His comments came just days after the San Bernardino massacre that left 14 people dead.

The petition notes that Canada’s criminal code outlaws hate propaganda and states “Canada should ban Donald Trump from entering Canada and spreading his hate-mongering. For life.”

"His words are poisonous"

British Columbia union leader David Black has put together a second Canadian petition filed through the House of Commons, also calling for a ban against the billionaire and former television reality star from entering the country. To date, his petition has gathered 2149 signatures.

Trump's comments upset Black, the president of MoveUp. "There's room for debate about how we respond to the issues of the world, but damning a class of people simply based upon their religion is taking things too far and quite dangerous, actually," Black told National Observer.

Black doesn't know whether or not his petition will result in Canada banning Trump. "What I'm really looking for is a clear statement from our elected leaders that these comments are not acceptable and that's not the kind of people we want to have in Canada."

Kennedy Stewart, the NDP MP for Burnaby South, has thrown his support behind Black's petition and says under legislation because the petition has gathered more than 500 names, he'll be able to table it in the House of Commons, at which point the government will have 45 days to respond to it.

The federal NDP also has a petition that urges Canadians to “Tell Donald Trump that hate and discrimination are not welcome in Canada - and add your name to #BanTrump.

The Canadian petitions are dwarfed by the U.K. one, which attracted over half-a-million signatures, sparking the debate in parliament.

The BBC reported that British Home Office Minister, James Brokenshire criticized Trump’s call for a ban on Muslims; however, he said it was the responsibility of the U.K. to engage with all its presidential candidates, even if there is profound disagreement with their views.

The MPs said they’d considered the petition, but ultimately did not hold a vote on whether to ban Trump, according to the British broadcaster.

On his presidential campaign web page, Trump makes his views on immigration very clear. He calls for a permanent wall separating Mexico and the U.S. and insists Mexico should have to pay for construction of such a wall.

“The cost of building a permanent border wall pales mightily in comparison to what American taxpayers spend every single year on dealing with the fallout of illegal immigration on their communities, schools and unemployment offices,” reads Trump’s campaign platform.

He also calls for detention, “not catch-and-release,” of illegal immigrants, and proposes an American worker first policy.

“The influx of foreign workers holds down salaries, keeps unemployment high, and makes it difficult for poor and working class Americans – including immigrants themselves and their children – to earn a middle class wage,” states his campaign platform.

Ray Ban Aviator Oro 18k
It is very important established weight loss targets yourself which can be actually reachable. The easiest method to shed weight is usually to establish little objectives for example maybe five or ten kilos at any time. Once you achieve the smaller objective, you are going to truly feel well informed and would like to keep going in your weight loss quest. It can be a great way to stay encouraged.

Plan out your foods for the entire day in order to avoid snacking on products which aren't good for you. Carrying a child is full of cravings and if we aren't preparing our foods we could turn out consuming simply harmful snacks throughout the day. Make sure you continue to keep wholesome snack foods together with you all day like carrot sticks and whole-grain crackers.