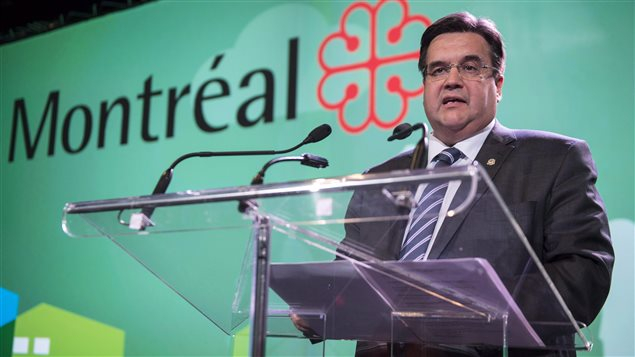 The city of Montreal and surrounding communities have come out swinging against TransCanada Corporation’s Energy East pipeline project.

“Call a spade a spade,” Montreal Mayor Denis Coderre said at a news conference on Thursday. “It’s a bad project.”

Leaders from the 82 communities, which represent nearly four million people, released a report concluding that the pipeline wouldn’t respect their urban development plan since it would go through forests, wetlands and agricultural land. As a result, Coderre said the urban community would oppose the Calgary-based company's project at provincial and federal hearings, including the upcoming review by the federal pipeline regulator, the National Energy Board.

“TransCanada’s project includes important risks for our environment and too few benefits for our economy,” Coderre said.

If approved, the multi-billion dollar Energy East pipeline would carry up to 1.1 million barrels of heavy oil per day across a 4,200 kilometre route between Alberta and Atlantic Canada.

TransCanada spokesman Tim Duboyce said the company would quickly review the report and respond to concerns, noting that it has already made more than 700 changes to the proposed pipeline route based on other discussions with landowners and communities.

"So we definitely want to use this to make this a better project," Duboyce said, adding that safety and the environment were top of mind concerns for the company.

He also said that many of the communities would have more protection with the construction of Energy East since the pipeline would displace current shipments of oil by rail and "into a safer pipeline."

Montreal's position drew a fierce response from Alberta politicians, including from members of the provincial NDP government, who described the pipeline opposition as short-sighted and hypocritical. Alberta opposition Wild Rose Leader Brian Jean criticized Montreal's environmental record, noting that the city had recently dumped raw sewage into the St. Lawrence River during a scheduled shutdown of its wastewater infrastructure.

Environmental groups such as Greenpeace Canada and Equiterre endorsed Montreal's position, with the latter describing it as "courageous" decision. Many environmentalists have opposed the project and other new pipelines, arguing that this infrastructure would facilitate growth in Canada’s oilsands industry — the fastest growing source of heat-trapping greenhouse gas emissions in Canada — making it difficult for the country to reduce its carbon footprint and fight climate change. Some have also raised concerns about whether Canada has strong enough oversight and regulations for pipeline companies.

The Montreal-area mayors based their position and report on public consultations last September and October that reviewed more than 143 submissions, 66 oral presentations and an online survey completed by nearly 4,000 people.

Coderre also said that the cities were calling on Prime Minister Justin Trudeau’s government to change the existing laws surrounding the project’s review to include impacts of greenhouse gas emissions produced during transportation and consumption of oil on the pipeline, as well as to review all impacts in case of a spill.