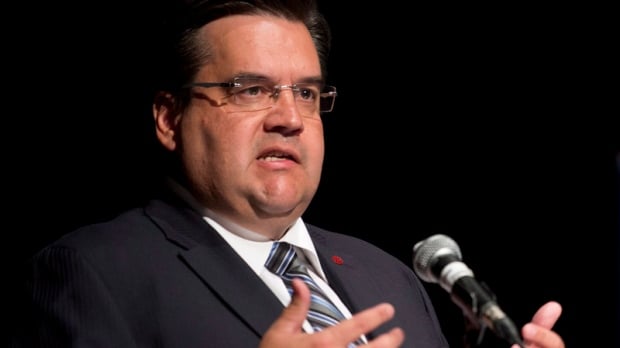 Montreal Mayor Denis Coderre participates in a debate on August 16, 2013. File photo by The Canadian Press.
Previous story
Next story

Montreal Mayor Denis Coderre has called for a suspension of the federal hearings on the controversial Energy East pipeline proposal, citing revelations uncovered by National Observer about a series of private meetings organized by the panelists.

The remarks, coming from the mayor of Canada's second largest city -- a major crossing point for the pipeline -- cast a cloud over the next set of hearing sessions on Energy East, a process which started earlier this month in New Brunswick and was scheduled to resume in Montreal on Monday.

According to internal notes and emails released through access to information legislation, two of the three panelists reviewing the 4,500 kilometre proposed pipeline, Jacques Gauthier and Lyne Mercier, met with former Quebec premier Jean Charest in January 2015, getting some political advice about the federal review process for Energy East from the former politician. At the time of that meeting, Charest was on a contract as a consultant for the proponent, Calgary-based TransCanada Corp. A third panelist, Roland George, was not present for the meeting, but Coderre said the revelations about the discussions are enough for people to be concerned that the process may be tainted.

“Well listen, I think that they have to do some thinking," Coderre told reporters at Montreal city hall on Thursday. "I think that’s why on Monday the elephant in the room will be that. It will be a question of whether these people are apt to be panelists."

Coderre also met privately with the NEB in January 2015, and has worked with them on a number of technical issues in subsequent discussions. But he believes the other meetings by the panelists have created a "major perception problem."

"So I have no issue with people talking, but if they meet with lobbyists for TransCanada it sends a bit of a bizarre message about the process," he said.

Coderre is among 82 mayors in the greater Montreal region who are opposed to Energy East due to concerns about spills as well as with the project's impacts on Canada's efforts to address climate change. But he said the perception problems about the review, in the wake of recent revelations, harms both sides of the debate.

"If you feel that the process is kind of tainted or there’s a perception that there might be a problem in the process, I believe that we should postpone it and the commissioners themselves should think about the process," Coderre said, "because at the end of the day, if instead of talking of the (benefits) or not of the pipeline, if we’re talking about the process, I don't think that we’re helping the Canadian people regarding that case.

"You can be against or in favour for all the reasons in the world. But if during all that time, the only thing that we’ll see in the media is questions about the process, I don't think that we are (being) helpful here.”

Lawyers from environmental groups in Quebec and Ontario have both submitted formal motions for the two panelists in question to recuse themselves from the hearings.

The NEB said it would consider these motions, inviting all participants to submit their comments in writing, but it banned participants from talking about it during the hearings.

Coderre wasn't pleased to hear this.

"If there are troubling facts, instead of saying: 'send us this in writing and we'll see what we can do later on,' they should be saying: 'let's take a break.'"

He also hinted that he would openly defy the NEB's orders to keep quiet about the Charest controversy.

"They should take a break, because if they don’t take a break, it’s certain that I know how I’m going to start my presentation regarding the National Energy Board," the mayor said.

This is a big Corporate

This is a big Corporate Government cover up.Wake up Canadians.Canada's middle class is now poor.The top 10% have blead us all.Free trade started it now we have FTW in Canada.Want a job in China or Mexico?If we were allowed to vote and make a difference do ya think the top 10% would allow this?