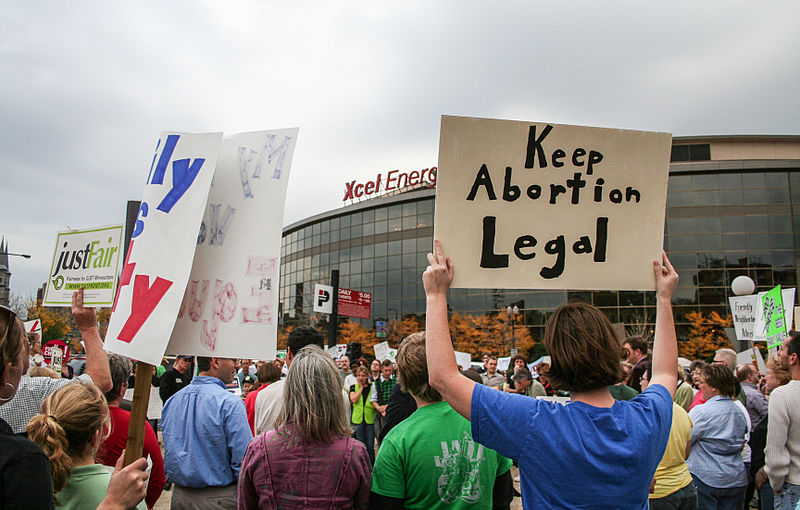 Abortion rights advocates attend a rally in Minnesota in 2006. (Photo by Tony Webster/Wikimedia Commons)
Next story

Luna Woods will have worn pants stained with fake blood, from the crotch to the knees, to her Manhattan university for over a month on Friday, the 43rd anniversary of the landmark Roe v. Wade Supreme Court decision that legalized abortion.

She hopes the medical-grade white pants and red paint will convey “what it looks like when women don't have access to safe legal abortions and they are forced to self-induce,” she told the National Observer.

It's hard to determine the exact number of American women who died of botched procedures before abortion was legal. More than a million abortions are estimated to have been performed in secret annually before the Supreme Court ruling. Pro-abortion rights advocacy group, NARAL Pro-Choice America, estimates that prior to the 1973 decision, as many as 5,000 women died annually in illegal, back-alley abortions. With ongoing legislation to the restrict the procedure, Woods said, “women's rights are being stripped away.”

In November, a University of Texas at Austin survey found that at least 100,000 women in the Lone Star State had attempted to self-induce abortions – in a state where since 2011, the number of providers has plummeted from over 60 to about a dozen now.

Woods is one of hundreds of thousands of women and men expected to rise up Friday to either celebrate or mourn the ruling and determine who takes ownership of the anniversary – which comes less than a week after radio silence on abortion at the last Democratic presidential debate Sunday before voters select the nominee ahead of the final vote in November.

Democratic front runner, Hillary Clinton, endorsed by NARAL as the best choice for pro-abortion-rights voters, briefly addressed the issue of gender wage parity at the opening of the two-hour election event. But there were no questions from left-leaning NBC news network moderators or statements on what any of the three participating candidates – which also included self-professed Social Democrat, Vermont Senator Bernie Sanders, and former Maryland Gov. Martin O'Malley – would do well to defend a procedure, the very face and accessibility of which has changed drastically in recent years.

Both sides of the debate are angry over the absence of abortion discourse at the debate Sunday. On the Republican side, the firebrand presidential hopeful Donald Trump was perhaps the first White House hopeful in U.S. history to say, “I hate the concept of abortion.” Trump has switched positions over the years, going from pro-choice in the late 90s to becoming anti-abortion in recent years.

Woods, a member of radical abortion rights advocacy group Stop Patriarchy, says their silence is part of a mounting phenomenon in U.S. society: Abortion opponents have gained so much ground, she says, that even traditional defenders of the procedure are unwilling to tackle the topic ahead of an election for fear of losing votes.

“They want to win over moderate people in the middle who might not be so hard on standing up for abortion,” Woods said.

At the grassroots level, many self-professed abortion rights proponents have also become apologists for the procedure, Stop Patriarchy founder Sunsara Taylor, an adherent of the U.S. Revolutionary Communist Party, said.

“There's a notion propagated by Democrats and some reproductive rights activists that we should sidestep a fight that should be taken on directly. There are many raising money helping to supplement the cost of abortions for women who are poor or from rural areas. Of course, they should help women have services,” Taylor said. But “if you restrict yourself to simply trying to help an ever-growing number of women access an ever-shrinking number of facilities, you are missing the point: We need to change the words in the debate: It's a war on women with a body count, compounded by mountains of shame. It's a war that needs to be fought and resisted. We need to call out the women-haters and religious fascists for what they are.”

Taylor's organization, relatively new to the abortion rights advocacy scene, has in recent years posted stickers around New York City with the words, “ABORTION ON DEMAND AND WITHOUT APOLOGY.” With many abortion rights proponents qualifying their support for the procedure with statements like, “No woman really wants to have an abortion, but...” or “... especially in cases of rape or incest,” the group advances a particular and evermore rare, unwavering argument for abortion as a human right: Based on their principle that it is immoral to force a woman to carry an unwanted pregnancy to term.

For Taylor and Woods' opposition at one of the anti-abortion groups organizing demonstrations to mourn the Supreme Court ruling, Democratic support for abortion is implicit – and fundamentalist.

“It was not mentioned at the debate because no debate on the abortion issue is allowed within the power structure of the Democratic Party,” Rose Trabbic, spokeswoman for Walk For Life West Coast – an organizer of a San Francisco anti-abortion march Friday, told National Observer.

The demonstrations are expected by both sides to spark debate where it has become rare.

The 12th annual Walk for Life in San Francisco – a counterpart to an even larger “March for Life” in Washington, D.C. – has drawn a cumulative 350,000 to 400,000 people to the streets of a city known as a bastion of social liberalism, Trabbic said. “Tens of thousands” are expected in San Francisco this year and “hundreds of thousands” are expected in the nation's capital. March for Life organizers did not respond to an interview request at time of publication.

It's “a chance for people to meet actual pro-lifers, who are real people, not media stereotypes. We include Catholics, Orthodox, Anglicans, Lutherans, Protestants, Buddhists, Jews, Secularists, Goths, and people of all ages and races,” Trabbic said, inviting Canadian allies to join in similar events north of the border.

Counter-demonstrations by Stop Patriarchy and similar groups are expected to take those protesters head on. Stop Patriarchy director Taylor said that while she could not reveal their plans for this year's demonstration, “there will be a very bold political confrontation where the hatred of the women behind the March of so-called Life will be exposed and countered.”

Other abortion rights activists have stepped up against what they also say is silence in creative, new ways in recent months, as election campaigns pick up steam.

Following a social media campaign designed to remove the stigma around abortion, in which women tweeted #ShoutYourAbortion with stories of their own experiences with the procedure, a leading advocate started a blog to tell her story. The Satanic Temple is an organization that, with Milton's Satan, has pledged to restore abortion rights, launching legal battles to exempt ostensible members from observing state-legislated restrictions they say go against their principles. Last month, Satanic Temple national spokeswoman Jex Blackmore started a blog called “Unmother” that spoke frankly about her abortion.

In academia, a student at the University of Missouri is conducting a dissertation on the effects of the 72-hour abortion waiting period on women in her state. That is in spite of a Missouri legislator wrote to the public university ordering that it halt the dissertation, which he charged was tantamount to state-funded publicity for Planned Parenthood, sparking outrage online and in the national press over academic freedom.

Many from both sides of the debate say the demonstrations Friday will kick off a heightened battle over abortion this election year, particularly after in recent years statehouse legislators across the country have passed laws that restrict access to the procedure – including 72-hour waiting periods and new standards for clinics that effectively forced them to shutter.

The pro-abortion rights think tank Center for Reproductive Rights in December reported that state lawmakers proposed an unprecendented almost 400 bills that would restrict access to abortion in 2015. NARAL gave the U.S. a “D” grade on the state of reproductive rights in a study published Wednesday. “States also enacted more anti-choice measures in 2015 than they did in 2014, highlighting the need to protect reproductive freedom in 2016 at the Supreme Court, in Congress, from the White House and in state legislatures across the country,” the organization said in a press release. NARAL did not respond to a request for further comment.

The effect of the restrictions, abortion rights proponents say, has been to make the procedure inaccessible, particularly for the rural poor. In Missouri, for example, abortion rights proponents say, clinic closures mean that women need to travel an average 120 miles, get a hotel for the three-day wait and then pay an average $400 to $600 for the actual abortion – something that many in state would likely find prohibitively expensive. The 72-hour wait period was legislated in 2014. Many of the regulations came into effect in states across the country starting in 2011.

Abortion is not just about women terminating unwanted pregnancies, activists for abortion rights say, but rather is an emblem for the fight to perceive women – in a country where wage parity is still an issue – as “more than incubators,” Woods said. Abortion is also a topic that touches on the U.S.'s ostensible separation of Church and State, a health care system that continues to leave 29 million Americans uninsured and a fraught civil liberties landscape that has refused same-sex couples marriage licenses even in the wake of a landmark Supreme Court decision last year.

“Abortion is completely moral,” Taylor said, “Forced pregnancy is female enslavement. Abortion needs to be available on demand and without apology. That shouldn't be up for a vote anymore than slavery should.”

Video of actor Elizabeth Banks by Center for Reproductive Rights.

Video of Retta by Center for Reproductive Rights

Video of actor Bellamy Young by Center for Reproductive Rights.