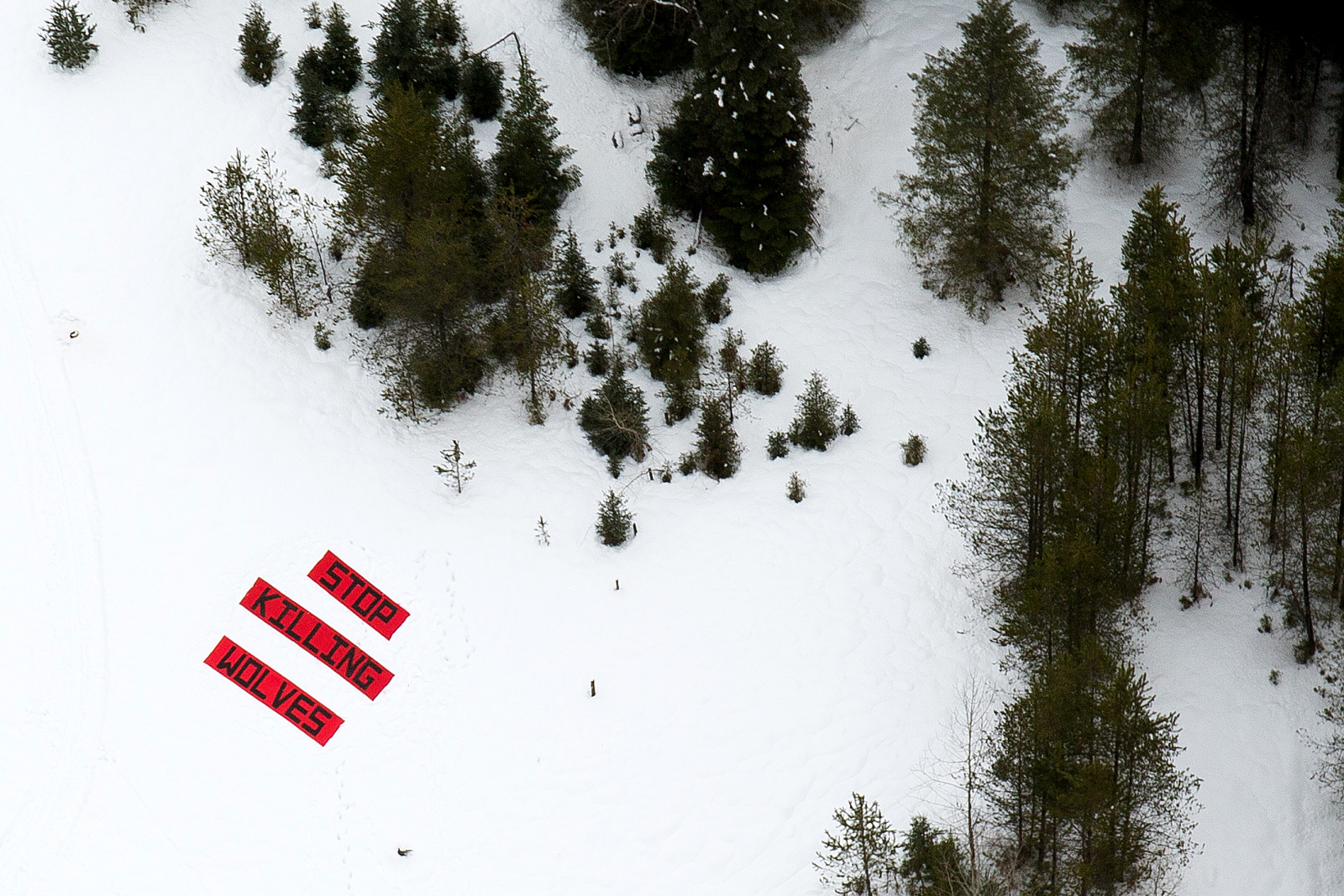 Members of the B.C.-based conservation organization dropped a banner in a forest clearcut in B.C.’s South Selkirk region. Read from the air, the banner demands that the government and Bighorn Helicopters “stop killing wolves.”

“Bighorn Helicopters is responsible for the slaughter of over 1,000 wolves in the last decade,” said Tommy Knowles, campaign director for the Wildlife Defence League.

“They continue this despicable legacy of killing wolves, including mothers and pups, through their role in the government-sponsored, taxpayer-funded wolf cull.”

The Wildlife Defence League alleges that Bighorn Helicopters shot some 1,000 wolves in Alberta in wolf cull efforts in that province.

“Simply put, they are bounty hunters for wolves and have left a trail of blood in their wake,” the Wildlife Defence League declares on their Facebook page.

Clay Wilson, president of Cranbrook-based, B.C. Bighorn Helicopters, could not be reached for comment.

The program will kill nearly 500 wolves and cost taxpayers approximately $2.2 million. The program is entering its second year. During the first year some 80 wolves were killed.

Government contractors radio collar wolves in the spring so snipers in helicopters can track them back to their packs and kill them throughout the winter.

On its website, Bighorn says it provides aerial support during ungulate and predator species studies to enhance results for the “effective management and sustainability of this vital component of nature.”

“The Bighorn Helicopters Inc. animal crew is the most experienced and successful crew in Canada,” according to the website.

This is the second year running that the Wildlife Defence League has campaigned against the helicopter company. The conservation group is asking the public to contact the firm and demand that they drop their wolf cull contract with the B.C. government.

The group is also on the ground in the South Selkirk region in an effort to monitor and document the cull.

The province contends that the wolves are a key factor in caribou decline, attributing at least 37 per cent of all adult deaths to wolves.

The current mountain caribou population numbers about 1,500 in 15 separate herds throughout the province.

One herd, the South Selkirk, only has 18 surviving caribou. And in the South Peace, the four herds there are on the decline.

In late January, Pacific Wild and the Valhalla Wilderness Society filed an application for a judicial review of the B.C. government’s wolf culling program.

The groups hope the review will determine if the B.C. government’s decision to cull wolves reasonably constitutes proper management of the species.