Nenshi is Energy East's champion in Ottawa. But his pipeline pitch has holes. 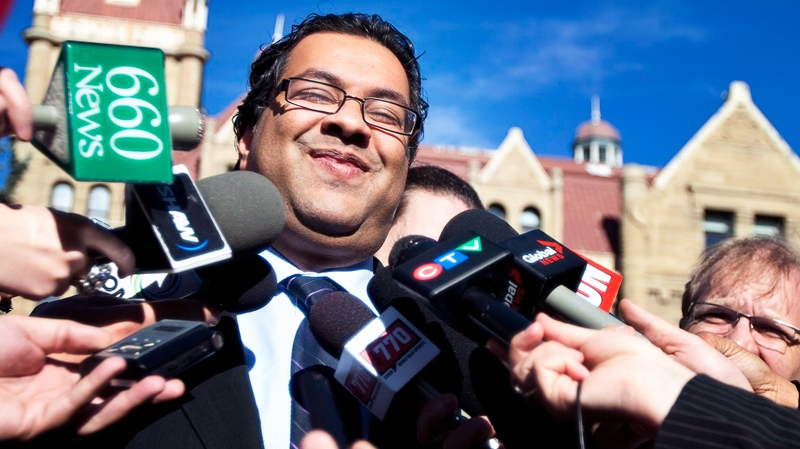 It’s too bad Denis Coderre wasn’t in the room.

Calgary Mayor Naheed Nenshi was in the nation’s capital for a two-day conference of big-city mayors. While he was nearby, he addressed a business audience and about two dozen visiting mayors and councillors at Ottawa City Hall Thursday morning.

Coderre was apparently a no-show.

Sure, Nenshi made his pitch for Energy East. But the rest of his talk was the Nenshi we’ve come to know, and many of us have grown to admire, in his nearly six years as Calgary’s mayor.

The municipal visionary who’s passionate about things like affordable housing and clean water, public transit and urban rail, flood control, infrastructure investment (of the non-pipeline variety), and the “nation-defining moment” that began when Canada opened its doors 25,000 Syrian refugees.

The prairie icon who had Canadians cheering from coast to coast last year when he won an award as the world’s best mayor.

Nenshi’s focus was far broader than his recent public spat with Coderre over TransCanada Corporation’s controversial Energy East pipeline proposal. So on this day, the two mayors would have found far more to agree on than not.

Which ultimately made him the most powerful, effective spokesperson a beleaguered pipeline project could have hoped for.

Hanging in against the crash

Nenshi painted a picture of a city that is hanging in against crashing oil prices and a crumbling fossil fuel economy. With unemployment in northern Alberta in double digits, Calgary “actually created more jobs in 2015 than it lost,” he said, although continuing population growth brought the city’s unemployment rate “all the way to the national average. It’s not where we’re used to being.”

Speaking a day after Prime Minister Justin Trudeau’s infrastructure funding announcement in Edmonton, Nenshi urged Ottawa to free up infrastructure funds the Harper government first promised in 2014. He said Calgary is already investing $2.5 billion of its own in capital projects this year. And as long as federal funds are freed up in block grants, rather than requiring bureaucratic approval for each individual investment, “we can get the help wanted ads in the newspapers next week.”

Nenshi had a great term for local investments that can trigger job creation across the economy. He called them “nation-shaping infrastructure.”

That other nation-building project

But then the Calgary mayor pivoted to his more familiar pitch for pipelines as nation-building projects that will bring Alberta’s stranded fossil reserves to tidewater, reducing the discount the province’s producers have to offer their customers and delivering tax revenues and economic spin-offs across the country.

“We must find access to other markets because consumers around the world need energy,” he told participants. “You can’t do anti-poverty work or global development without access to energy,” whether that energy is liquefied natural gas or oil.

“Rather than an inflammatory conversation pitting energy advocates against environmental advocates, we need to work together as communities, as a nation, to get this right.”

Holes in the pipeline pitch

Nenshi’s problem is that time is not on his side. Alberta has nearly 20,000 lost jobs to replace right away. But pipelines, like the other infrastructure he quite rightly supports, are built for the long haul.

News reports tend to talk about 30- to 35-year life spans, ProPublica reported in 2010 that more than 60 per cent of U.S. pipelines were at least 40 years old, and the life expectancy of steel pipes runs about 50.

Over that time span, Energy East won’t be able to operate, which may be the best reason the pipeline can never be built. At the 2015 United Nations climate summit in Paris, nations committed to a 1.5°C long-term limit on average global warming. Even with a 2.0°C target, most Canadian oilsands will have to stay in the ground—notwithstanding Nenshi’s best efforts Thursday morning to cast the reality of unburnable carbon as a non-starter.

There were other holes in Nenshi’s pipeline argument. An accident of geography and short-term economics gives him the unenviable job of having to defend the National Energy Board’s “fraudulent” review panel for the Trans Mountain pipeline expansion as a “rigorous science-based process that strips the emotion” out of the decision.

Of showcasing the 14,000 direct and indirect jobs that Energy East would create over nine years, according to TransCanada’s estimate, rather than the million person-years of employment that would flow from a solid, five-year investment in a low-carbon future.

But it was hard to make that case in the moment, after Nenshi himself had crafted a vision of the vibrant, sustainable, ultimately low-carbon city he’s already set out to create. By talking about the great things happening in Calgary, Nenshi gave protective context to a fossil megaproject that would draw needed investment from the future he’s working to build.

Look no farther for the “social licence” the fossil industry has been struggling so hard to conjure, that the Trudeau government might yet be trying to help them acquire.

It’s harder to talk back to someone about a pipeline when they’ve already laid out most of the agenda that you were all set to present as an alternative.