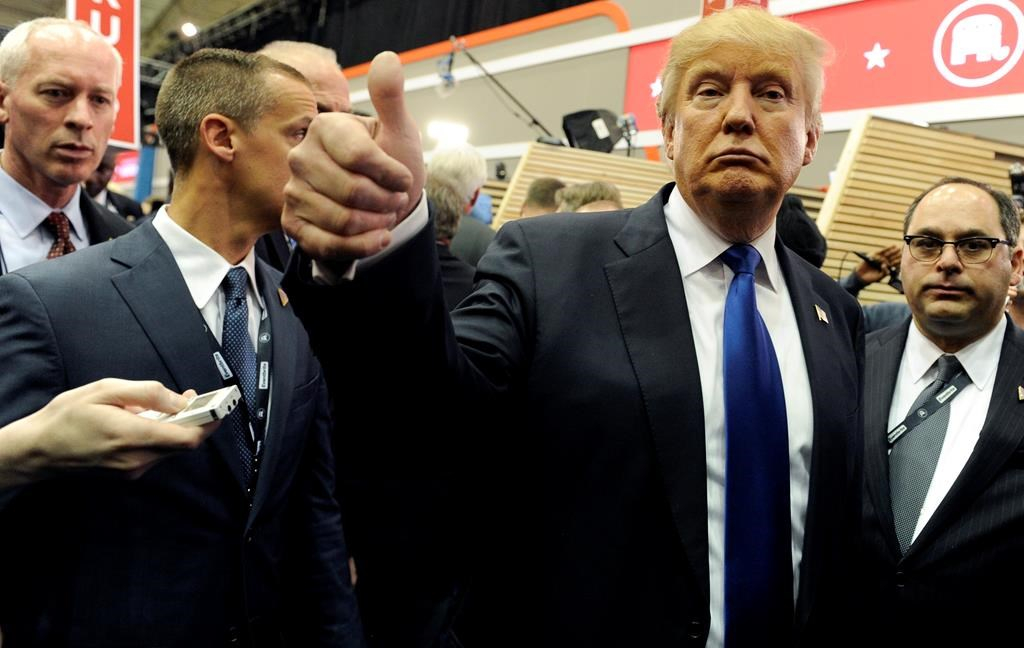 WASHINGTON — Donald Trump wants a wall on the border — just not the northern one.

He dismissed the idea of a wall with Canada during Thursday's televised debate. A moderator from Spanish-language Telemundo asked Trump to justify his unequal treatment of the U.S.'s neighbours — she asked why he insisted on a wall with Mexico, when the northern neighbour might represent a bigger security risk.

"U.S. officials have warned that it is the Canadian border which is the most significant threat," María Celeste Arraras asked, in an apparent reference to terrorism. "You have said that you will not build a wall in Canada... Isn't that like closing the front door, and leaving the back door open?"

Another presidential candidate fumbled a similar question a few months ago. Wisconsin Gov. Scott Walker was asked whether he'd consider a northern wall. He appeared to entertain the idea, and was ridiculed for his answer. He withdrew from the presidential race shortly thereafter.

Trump, however, shut it down immediately Thursday. He suggested two reasons for rejecting a northern wall: It would be too long and expensive, and it was unnecessary.

The exchange occurred in a debate where Trump faced increasingly sharp attacks from his rivals, with Super Tuesday approaching and the opportunities to derail his campaign growing scarcer.

He said the southern wall could be built quickly, and repeated his vow that Mexico would be arm-twisted into paying for it. Mexican politicians have ridiculed the idea — former president Vicente Fox recently used a curse word to describe Trump's proposal.

"We have far less problem with that (northern) border than we do with our southern border," Trump said. "You go to New Hampshire, the first thing they talk about is heroin and drugs pouring in... They're pouring in from the southern border."

Trump had made a similar statement last summer to the CBC. Thursday's question from the Telemundo journalist, however, was the first time he was pressed on a presidential debate stage to explain why his wall plans were limited only to Mexico.

Sen. Marco Rubio, for instance, accused Trump of hypocrisy for employing illegal workers; raised the fact that his business venture Trump University was being sued by disgruntled ex-students; and suggested he'd never have amounted to anything if he hadn't been given his father's real-estate empire.

"If he hadn’t inherited $200 million, you know where Donald Trump would be right now?" Rubio asked.

Trump responded with a few ad-hominem jabs of his own.

He said Rubio knew nothing about business, and in an interview after the debate commented on his rival's sweatiness — concluding that he'd be too nervous to deal with other leaders like Russia's Vladimir Putin.