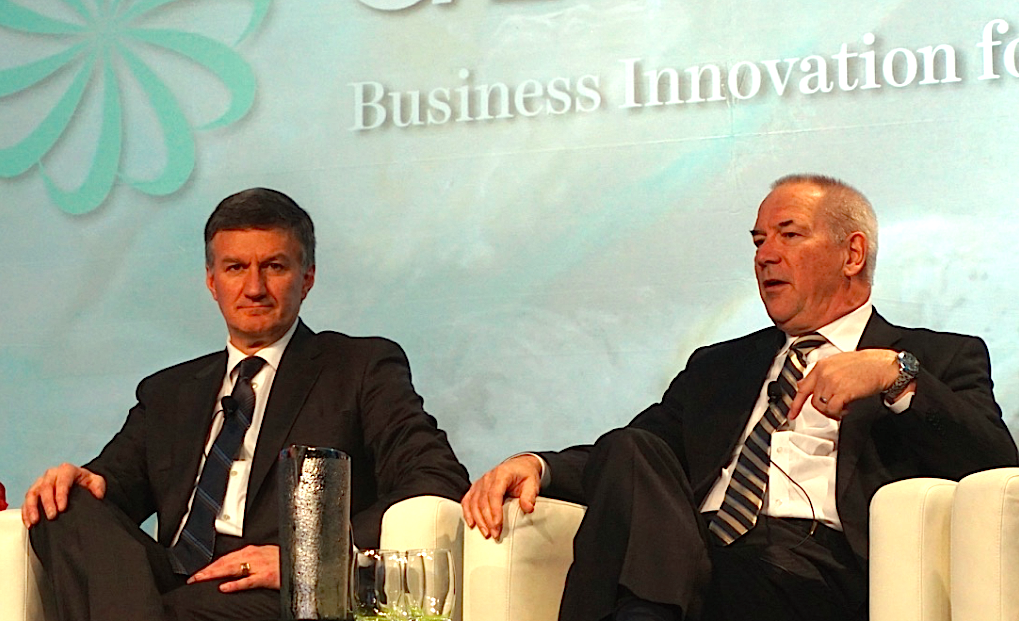 Enbridge CEO Al Monaco had some advice for how Justin Trudeau's new government could help pipeline giants like his company invest more in green energy, while speaking on a panel at the GLOBE sustainability conference in Vancouver.

"Tax incentives are certainly one way to do it," Monaco said, in reference to the Obama administration's initiatives that have sparked a huge growth in renewables south of the border.

When asked about his comments in a conference call last month about Enbridge wanting to shift away from the oil sands by 2019, Monaco emphasized his company wasn't abandoning bitumen extraction while there was consumer demand.

"First of all, what I said was we're still going to have conventional transportation fuels — people need fuel, and our business is a key part of that happening," he stressed. "As far as transition and what governments can do, they can provide stable regulatory environments and stable commercial environments for us to invest. There should be support mechanisms in place so that if we invest capital, we can get a return of that capital back....having renewable (energy) targets is a very good starting point to make sure of that."

Monaco said during the panel talk that Canadian consumers want low cost, environmentally sustainable energy, and that 30 per cent of Enbridge's earnings and assets were now driven by natural gas and renewable energy.

Meanwhile, the role of natural gas in the transition to renewable energy sparked disagreement on the panel.

While Harvard Business School professor Michael Porter —who has written extensively about energy — argued that Canada needs to ship out more and more LNG tankers to be a leader in transitioning to clean energy, environmental advocate Tzeporah Berman countered that in some cases, a direct "leap" from sources like oil and coal to renewables like wind and solar was possible.

"I think your analysis is excellent...but right now, the math is wrong, or part of it is wrong," Berman told Porter. "When we talk about what infrastructure or what projects we're moving forward with as a country, we need to square that with our carbon budget...We need to seriously look at two degrees, or as Environment Minister McKenna says, 1.5 degrees. Right now, most of the business is based on business as usual — so that's a six degree world."

She was responding to Porter's earlier presentation, during which he lauded Canada and U.S. natural gas projects as an important bridge toward clean energy.

"We need natural gas to transition to renewable energy in the future. Natural gas is critical transition to that process," Porter said. "It will hold down the cost of the transition. Renewables are coming, and eventually they'll be competitive but the issue is time. We're not going to do what Germany did, which is raise everyone's utility bill dramatically to force renewables to go faster than they can."

Porter said Germany's emissions were rising as it moved off nuclear energy and pushed toward renewables.

"The irony is, German's now burning more coal. What a disaster!" he exclaimed.

But Berman said arguments about the need for gas in the transition to renewables were "not necessarily true" and that corporations and governments needed to consider how much more the earth's atmosphere could take, in addition to concerns relating to consumer markets and maximizing oil and gas benefits in the shift to green energy.

"In some regions, we can leap straight to a significant renewable grid," Berman said, to applause from the audience. "We can negotiate all we want, but the atmosphere has limits."

She said it was "very difficult" to be living in the climate change era, and that while some people criticize the environmental movement for polarizing dialogue, she explained that large protests created the "political space" for oil companies and governments to talk about solutions with environmental groups.

Clean Energy Canada executive director Merran Smith said the leap toward clean energy is coming faster than the speakers seem to anticipate, and that the transition may not be so far in the future as the panelists suggested.