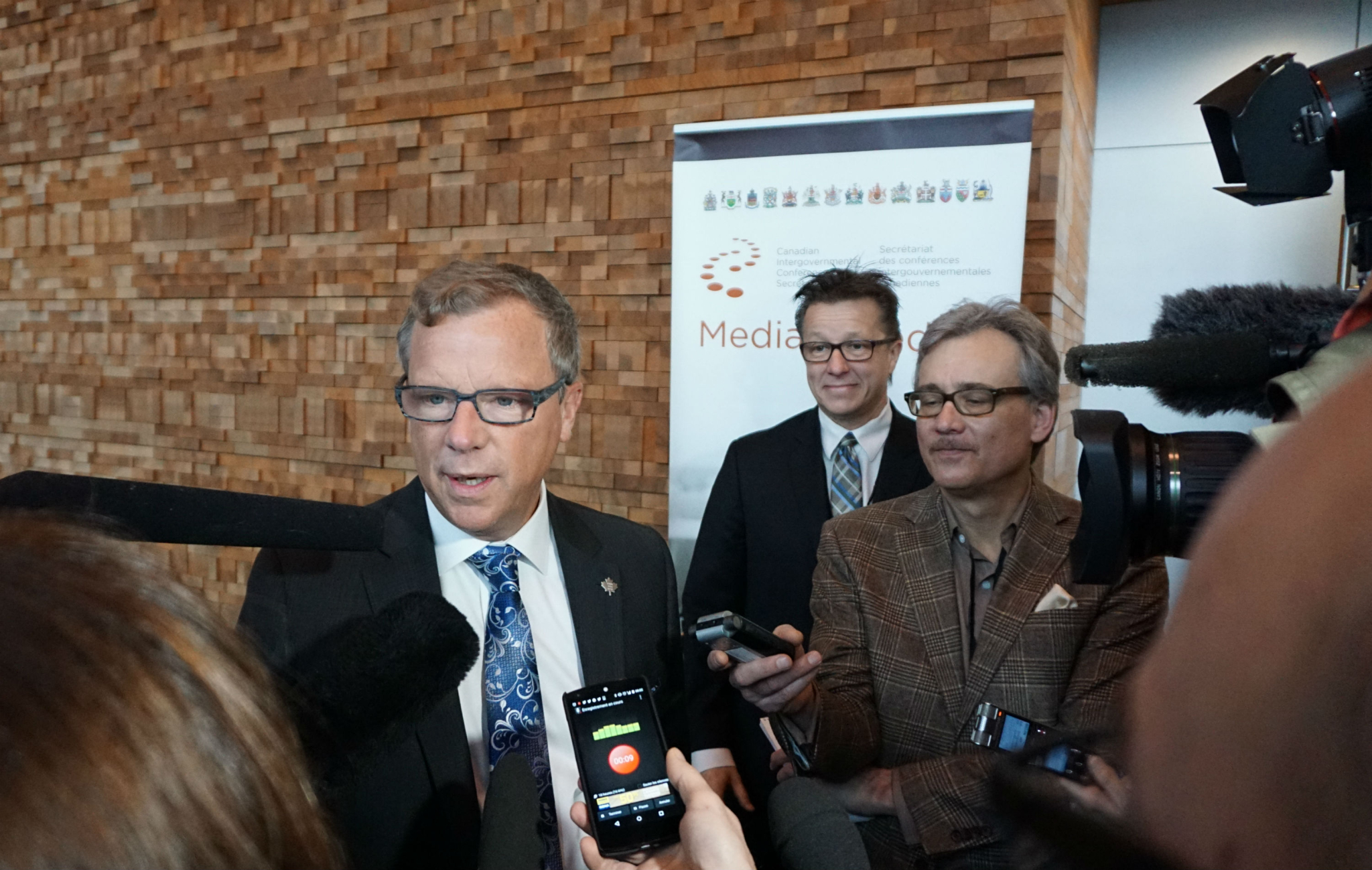 Saskatchewan Premier Brad Wall is one of many provincial leaders opposing a pan-Canadian carbon tax at the First Ministers' meeting in Vancouver, B.C. on Thurs. March 3, 2016. Photo by Elizabeth McSheffrey.
Previous story
Next story

Minutes before their roundtable with Prime Minister Justin Trudeau on Thursday, Canada's premiers had still not agreed on a minimum price for carbon.

Despite a looming federal government threat to bring the legislative hammer down and impose a carbon price for the country, the provincial and territorial leaders maintained that a one-size-fits-all approach to tackling climate change may not work best for Canada.

"Canada is a very big country and I think the approach to dealing with this issue needs to be as diverse as the country is," said Yukon Premier Darrell Pasloski, at the First Ministers' meeting in Vancouver this morning. “Hopefully we have a federal government that will listen to that."

The premiers have long sought "flexibility" from the feds on the issue, concerned it will weigh heavily on economies that are already struggling. Saskatchewan Premier Brad Wall — the loudest of the carbon tax critics — has said a federal carbon tax could lift $1.3 billion from the provincial economy, and cost the average homeowner up to $500 extra per year if priced at a rate of $15 per tonne.

"There are concerns around the table about a national carbon tax that go beyond Saskatchewan," he told reporters in Vancouver ahead of the meeting. "I think we’re going to focus on how we can do better frankly, and it doesn’t necessarily have to mean a carbon price."

Despite the premier's concerns, if British Columbia is any example, experts say a carbon tax may actually benefit local economies. A National Observer report found that since the province introduced carbon pricing in 2008, the revenue generated from the tax may have allowed the provincial government to cut income tax, leaving more money in people's wallets.

A total of five Canadian provinces already have a carbon tax, and B.C. Premier Christy Clark said she sympathizes with those who are facing it for the very first time.

“British Columbia is growing," she explained. "Many provinces are really struggling so I think we need to respect that other premiers have issues with this proposal that we’ve seen so far and think about the things we can do together.”

The premiers will leave all options on the table, including regionally-specific strategies to create jobs, reduce greenhouse gas emissions and combat climate change. Pasloski in particular has creative ideas for the Yukon that include partnering on more energy-efficient buildings, which would lead to contract work and economic growth and an overall reduction in emissions.

"I think that’s a positive as opposed to adding a cost in the north where it’s already a very expensive to live, and actually putting a downward pressure of our economy," he said.

Nova Scotia premier Stephen McNeil, whose province relies heavily on hydroelectricity, vouched for investments that capitalize on individual regions' renewable resources. Manitoba Premier Greg Selinger, who also opposes the carbon tax, suggested taking a look at a pan-Canadian energy grid, electrification of vehicles, and getting communities off of diesel.

Yesterday, Green Party leader Elizabeth May called on the premiers to "set aside narrow self-interests" and set more ambitious climate targets for Canada, and despite his position on carbon pricing, Selinger, agreed. He said provincial leaders must not lose sight of the ultimate prize — a sustainable future that doesn't rely on fossil fuels.

"We get sidetracked into the classic federalism of who’s jurisdiction, who is in charge, and who is going to tell who what to do," he explained. “But the 'do nothing' option is not there.

"It costs you billions of dollars to do nothing, so you might as well make a decision to do things that are going to grow your economy, reduce greenhouse gas emissions and do it in a way that’s flexible and allows you to form the partnerships in whatever jurisdiction your working with that work for your community.”

He said the COP21 Paris climate target of keeping global warming below two degrees is ambitious and will require an ambitious solution from Canada. While he would prefer to keep Manitoba's current collaborative cap-and-trade system, the premier is not ruling anything out.

Selinger and Wall face a provincial election in April.

“I think every jurisdiction has to be committed to do that in a way that makes sense to them," he said. “I think [the feds] should stay open to listening to everybody’s ideas before they come to a hard conclusion, but if somebody says, ‘I don’t want to do anything,’ that’s really a non-starter as well."

There is still talk at the table about "carbon management" rather than carbon pricing, and while it isn't expected the premiers will come to a consensus on the tax on Thursday, they are expected to highlight their progress so far, and focus on the importance of holding regular First Ministers' meetings.